Volunteers are at the forefront of a drive to protect residents of the sprawling refugee settlement as the cyclone and monsoon season approaches. 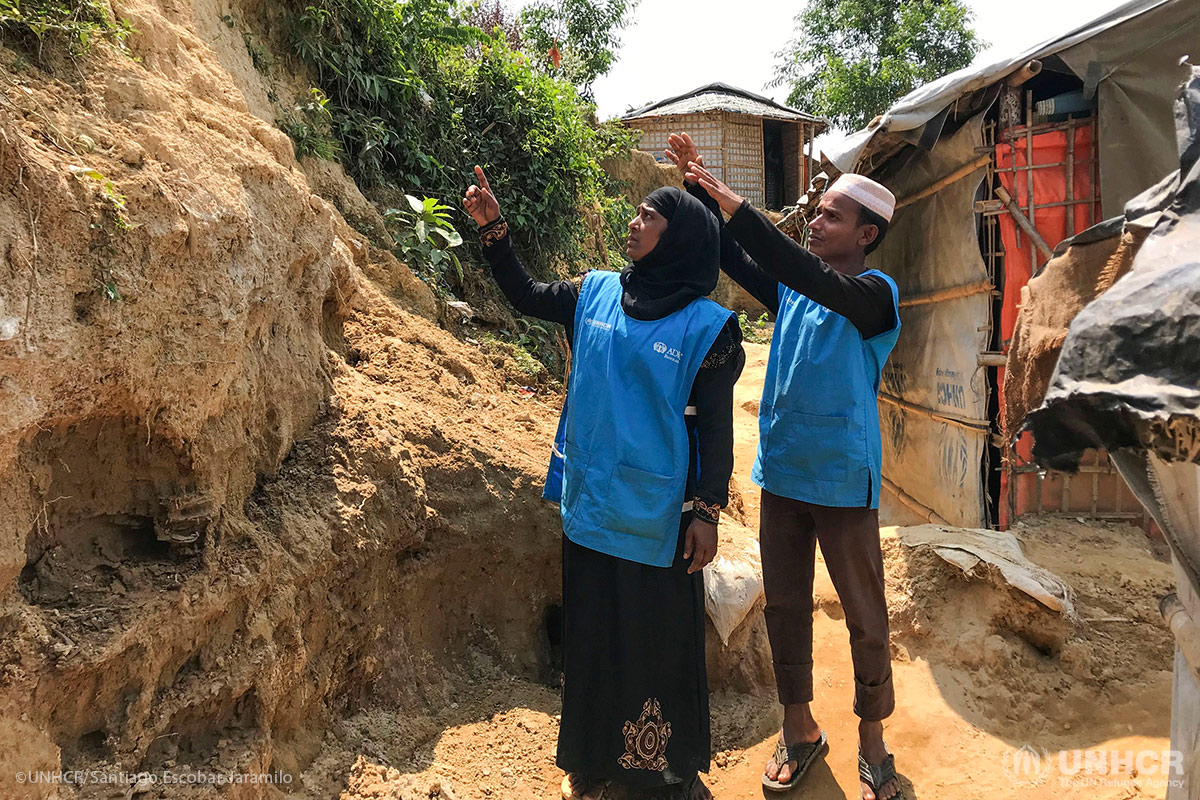 Stepping along a narrow, winding pathway formed by sandbags reinforced by cement, Anwar, a 25-year-old father of two, points out areas of land around Chakmarkul refugee settlement where monsoon rains opened up cracks in hillsides packed with shelters.

“I remember one house after a big storm. The storm was so strong that the house collapsed and washed away in a landslide,” he says, recalling the first monsoon season Rohingya refugees spent in Bangladesh since fleeing Myanmar in massive numbers in August 2017.

“Two people were half-buried in the earth and couldn’t move because they were trapped. The crowd were trying to use axes to cut them free and pull them out … but it was very dangerous,” he says.

“We told them to stop and went in ourselves. We were wearing protective gloves, boots and clothing, and pulled the earth away. We pulled them free. We helped to save their lives and I’m very proud of that.”

The monsoon rains fall between April and September each year. The role played by Anwar, and other refugee volunteers during the last year’s rains was crucial in helping to keep the community safe.

One of 50 Safety Unit Volunteers working in the settlement, Anwar received three months of training, including workshops on first aid, dealing with fires and cyclone preparations. That training proved invaluable. 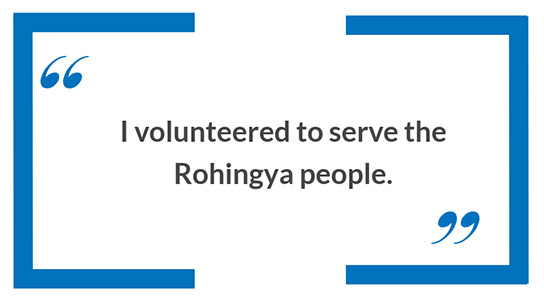 Chakmarkul is a relatively small refugee site, sheltering fewer than 13,000 individuals. But fellow volunteer Khalida Begum, a widow and mother of five, said that more than 200 shelters in Chakmarkul alone were damaged or destroyed in landslides last year and that the volunteer teams helped people to safety.

“I volunteered to serve the Rohingya people … to protect our community and save lives. We know the dangers, but we feel prepared because we’ve learned rescue techniques and how to save lives,” she says.

The monsoon reaches a peak in July and August in southeast Bangladesh, frequently dumping huge amounts of water in heavy cloudbursts. In just one 24-hour period last year, more than 15 inches of rain fell. 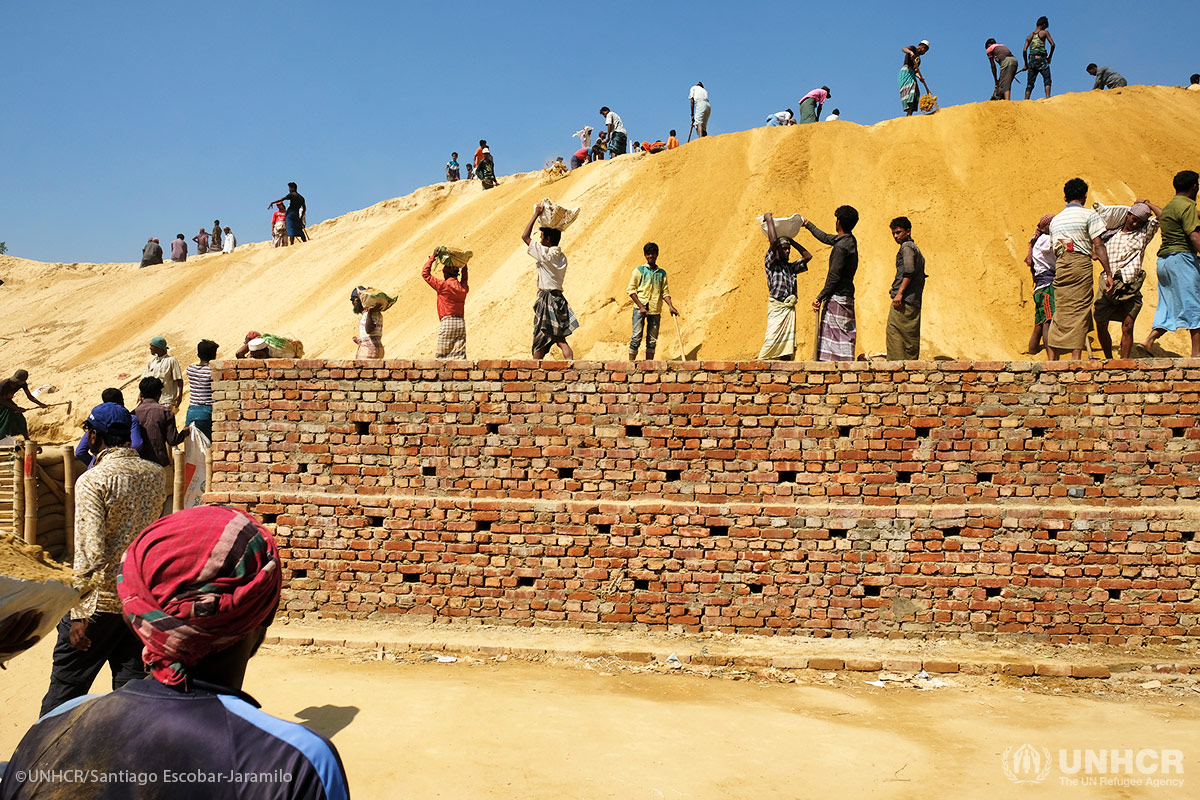 More than 740,000 Rohingya refugees who fled to Bangladesh since 2017 are sheltered in Cox’s Bazar district, joining more than 168,000 who fled earlier cycles of violence. For the refugees, experiencing their first wet season in flimsy bamboo shelters, and for the humanitarian agencies, working in support of the Government of Bangladesh, the last wet season proved a big test.

The speed of the refugee influx meant that families had built shelters wherever they could find available space, often on steep slopes or floodplains.

UNHCR, the UN Refugee Agency, working in close cooperation with its partners and the refugee community, focused on improving the fragile and densely crowded refugee settlements, building mile after mile of roads, as well as steps and bridges.

Much emphasis was also placed on training and empowering the refugee communities as first responders. And while humanitarian agencies continue to strengthen essential infrastructure and pre-position relief items in the settlements, the shift in emergency planning this year is towards a community-centered approach.

In addition to Safety Unit Volunteers, volunteer Community Outreach Members continue to go house to house, spreading information and awareness about how families can better protect themselves and their shelters. Volunteer Community Health Workers focus on preventing the spread of disease and volunteer Community Groups for men, women and youth also play a role in providing practical assistance to affected families and rebuilding damaged community structures.

Refugee volunteers might also be asked to work as community mobilizers with the Protection Emergency Response Units, which are ready to assist in helping unite families with children after any emergency, as well as providing basic counseling and assistance where necessary to vulnerable individuals.

“This year, in addition to putting in place the necessary hardware, the emergency plan places communities at the center of the response – building on their capacities to prepare and respond to disaster, alongside support from our teams.

“Refugees demonstrated high levels of solidarity and self-reliance last year and we will continue to provide more training to build their capacity not only as first responders but to help with infrastructure repairs, counseling, basic first aid and temporary evacuation, as well as helping to report incidents,” he added.

Having dealt with challenges in 2018, refugees have some experience and feel better prepared to face the weather dangers this year. Even so, many worry what will happen if a cyclone hits – which could have the capacity to destroy the majority of shelters in the settlements. 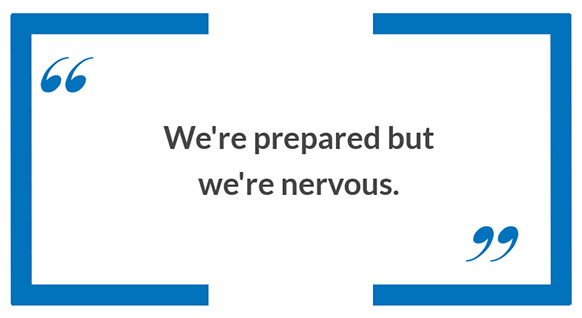 “We’re prepared but we’re nervous,” said Kasim, a volunteer with the Men’s Group in Chakmarkul, which meets regularly to discuss and address community issues through service projects designed and organized by the refugees themselves. The group went into full gear during the monsoons last year, helping families affected by landslides, digging out mud from homes and working to repair damaged shelters.

“The shelters are not strong. Also, the earth is soft and loose. There has been a massive cutting of trees to make way for shelters and firewood. Because of the deforestation, we’re in a more vulnerable state and … we could face more danger. We need to be vigilant, to keep our eyes and ears open,” Kasim continued.