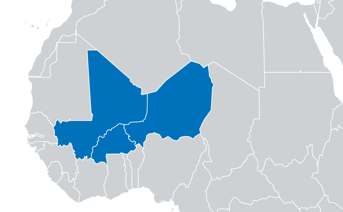 The central Sahel region, which includes the countries of Burkina Faso, Mali and Niger, is facing one of the fastest growing displacement crises in the world – yet one of the most forgotten. More than 2.7 million people have been forced to flee their homes and at least 13.4 million are in dire need of humanitarian assistance.

1. When did the Sahel refugee crisis begin?

2. Where are people in the Sahel fleeing to?

3. What are the biggest challenges in the Sahel?

4. How are women and children impacted by this crisis?

5. What is UNHCR doing to help in the Sahel?

1. When did the Sahel refugee crisis begin?

People began fleeing the central Sahel region in 2011 after an outbreak of violence in Northern Mali. Poverty, unemployment and the presence of armed groups in rural areas of Northern Mali all contributed to an increase in forced displacement. Today, armed groups have rapidly expanded, spreading violence to central parts of the country and to neighboring countries, such as Burkina Faso and Niger.

As a result of the conflict, millions of families have been displaced across the region, including 650,000 people uprooted in the past year alone.

2. Where are people in the Sahel fleeing to?

Approximately 1.8 million people have been internally displaced (forced to flee their home but not cross a border) and more than half a million have sought refuge in neighboring countries. The conflict is already affecting Mauritania and Chad and risks spilling over into coastal countries, such as Benin, Côte d’Ivoire, Ghana and Togo.

In Burkina Faso, at least 1 million people – approximately 5 percent of the country’s population- have fled violence inside the country in the past year, many seeking refuge in areas that are also affected by violence and poverty.

3. What are the biggest challenges in the Sahel?

Armed conflict, economic insecurity, and the adverse effects of climate change are some of the biggest challenges affecting the region.

Indiscriminate attacks against civilians and public infrastructure -including schools and health facilities- have threatened the lives of millions of people and their livelihoods. The conflict has claimed more than 6,500 lives in the last year and threatens to leave at least 7.4 million people suffering from acute malnutrition.

The Sahel region is also suffering the effects of climate change. Unpredictable weather patterns, droughts, floods and land degradation have jeopardized agriculture and livestock activities in a region where the majority of the population live off the land. This, in turn, has increased local competition for natural resources and threatens to exacerbate conflict and instability in the region.

4. How are women and children impacted by this crisis?

The conflict’s impact on women and children has been devastating. Incidents of rape and other forms of sexual and gender-based violence (SGBV), violence against children, exploitation, trafficking, forced recruitment and early marriage are on sharp rise.

The crisis has left approximately one million children suffering from severe acute malnutrition and more than 40 percent without birth registration, leaving hundreds of thousands at risk of statelessness.

COVID-19 restrictions have forced more than a million children out of school. Prolonged school closures not only deprive refugee children from the opportunity to create a better future for themselves, but also increase their risks of abuse, neglect, violence and exploitation. Refugee girls are particularly vulnerable as they are more prone to drop out of school permanently and forced into early marriage.

5. What is UNHCR doing to help in the Sahel?

UNHCR, the UN Refugee Agency is scaling up efforts to meet the urgent needs of refugees and internally displaced people in the Sahel region. UNHCR’s is delivering lifesaving shelter, clean water, healthcare assistance and psychological support to SGBV victims.  Protection activities such as refugee registration, documentation and access to asylum are also being scaled.

Since the beginning of COVID-19, UNHCR has also worked with governments and local partners to strengthen national healthcare systems, facilitate access to food and sanitation facilities, support online educational opportunities and expand livelihoods activities to help mitigate the negative socio-economic impact of the pandemic.

Refugees in the Sahel region need your help…