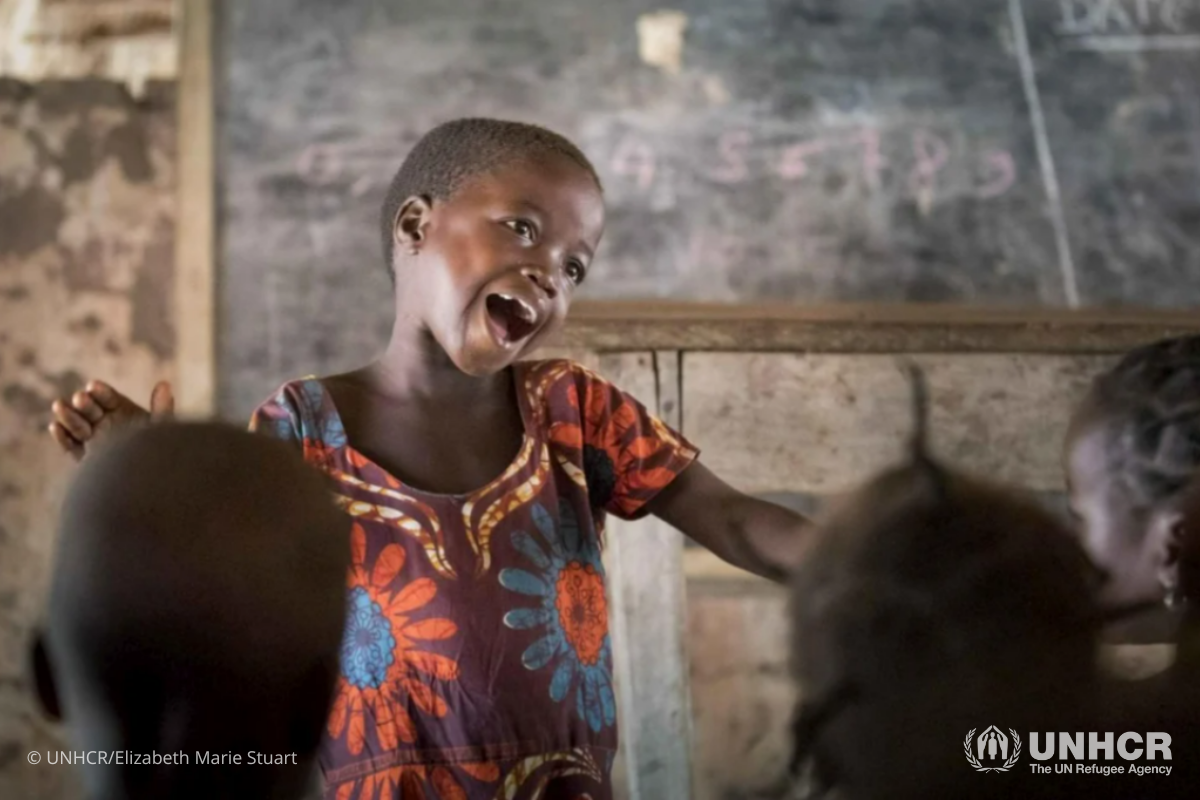 NEW YORK – Seven-time Formula 1 world champion Sir Lewis Hamilton is backing calls for all refugee children and youth to be given access to a full quality education, as a new report from UNHCR, the UN Refugee Agency, reveals the urgent need for more international support for refugee students.

In the report, All Inclusive: The Campaign for Refugee Education, data from more than 40 countries shows how refugees lag behind their non-refugee peers when it comes to enrollment in all levels of education.

Average enrollment rates for refugee children in primary schools in the 2020-2021 academic year were broadly stable at 68 percent. But enrollment drops sharply to 37 percent at secondary level, which refugee learners have historically struggled to access.

There was, however, better news at tertiary level. Although refugee enrollment stands at only 6 percent, this continues an upward trend from a mere 1 percent only a few years ago – giving the UN Refugee Agency grounds for optimism that its tertiary enrollment target of 15 percent by 2030 could be met.

UNHCR’s annual education report is published just as world leaders prepare to debate the future of learning at the Transforming Education Summit at the UN General Assembly on September 16-19.

Lewis, who campaigns for greater equality, fairness and diversity in education as well as in motorsport, said he was “proud to lend my voice” to the campaign for refugee children and youth to be included in national education systems, and not to be left on the margins.

“Education doesn’t just widen people’s horizons and present them with opportunities they would otherwise never dream of getting. It counteracts the damaging effects of systemic injustice,” he said in the report’s Final Word.

“It’s not just about creating better life chances for young people, helping them to find their purpose and forge their own futures. It’s about the knock-on effects of that: greater diversity in positions of leadership and influence, in the world of work, in sport, culture, politics.”

All Inclusive showcases young refugees from Sudan, Ukraine, Kenya and Myanmar as they grasp the various educational opportunities available to them, despite the disruption of forced displacement and the challenges of adapting to new – and not-so-new – circumstances.

Also writing in the report, Filippo Grandi, United Nations High Commissioner for Refugees, noted that many countries had recently made great progress towards including refugee learners in formal national education systems.

“Now we need to follow these policies with substantial and sustained financing, and to press home the gains of inclusion,” Grandi said.

“The saying ‘talent is universal but opportunity is not’ describes the reality for millions of refugee children. We need to close the yawning gap between talent and opportunity.”

UNHCR is calling for the inclusion of refugees in national education systems from the start of humanitarian emergencies, through protracted displacement situations and in longer-term development planning. Among other things, this requires more support for teacher training and salaries, new infrastructure, adequate and relevant learning materials, safe transport to and from schools, access to examinations and certification, and closing the digital divide affecting refugees.

“Education is an investment in development, human rights and peace,” Grandi said. “Now is the time to invest in human futures – in budding builders, creators and peacemakers.”

He added: “In the case of refugees, it is an investment in the people who will rebuild their countries when they can safely return home.”

The 2022 UNHCR Refugee Education Report is titled All Inclusive: The Campaign for Refugee Education. It tells the stories of some of the more than 10 million refugee children of school age under UNHCR’s mandate. It also highlights the aspirations of refugee youth eager to continue learning after secondary level, as well as the hopes and ambitions of teachers in refugee and host communities.

Data on refugee enrollments and population numbers is drawn from UNHCR country operations and refers to the 2020-2021 academic year. The report also references the latest available data on enrollment and out-of-school children and youth from the UNESCO Institute for Statistics (UIS).

UNHCR’s report coincides with the Transforming Education Summit, convened by the UN Secretary-General and taking place during the 77th session of the General Assembly. The Summit aims to mobilize action, ambition, solidarity and solutions with a view to transforming education between now and 2030.

UNHCR has also calculated that focusing investment on countries with the biggest refugee populations would pay huge dividends. The annual cost for all refugee students in low, lower-middle and upper-middle income host countries is estimated at US$4.85 billion, or a total of USD$63 billion over 13 years, from the first year of primary to the final year of secondary. However, lower and lower-middle income countries, which host half of school-age refugees, would need only 20 percent of that total. In other words, a fifth of the overall cost would cover more than 50 percent of school-age refugee children.