BUR AMINO CAMP, Ethiopia, July 2 (UNHCR) – When Amina* first saw the tent she and her young family had been allocated in the Bur Amino refugee camp in south-east Ethiopia, she realized that this might be her home for a long time. "I have to adjust to the new environment and accept that this is my new life, the life of a refugee," the 20-year-old Somali mother of two told UNHCR recently.

She unpacked pots, the only possessions she had brought all the way from her home near Berdale in southern Somalia's Bay region. "I have to cook for and feed my kids and siblings," she explained. The next day she would get sleeping mats, kitchen sets, mosquito nets from UNHCR and her first monthly food ration from the government's Administration for Refugee and Returnee Affairs (ARRA) and the World Food Programme. That night the family was given a hot meal. 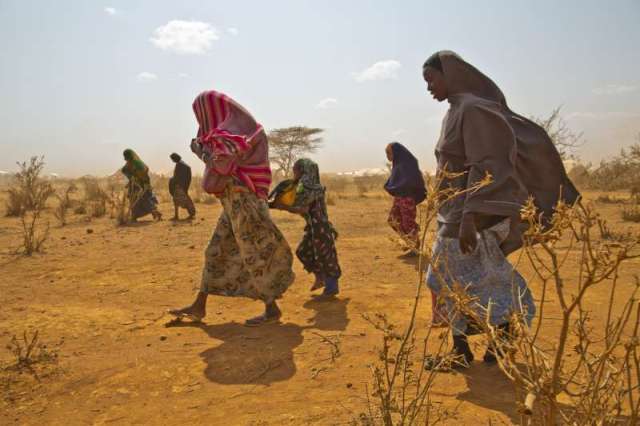 A family of Somali refugees arrives at Bur Amino camp in Ethiopia after the long journey from home. © UNHCR/J. Ose

"We were lucky to survive last year," Amina said, adding: "I saw so many people starving in my village." She was referring to victims of the worst drought to hit Somalia in more than half-a-century. It left countless people dead and forced some 300,000 to flee Somalia last year.

The situation was compounded by the violence that has devastated Somalia for over two decades and continues to displace people. In Bur Amino camp, UNHCR erects about 300 new tents a week, while also building latrines and water distribution systems, to meet the needs of new arrivals.

UNHCR and the Ethiopian authorities have agreed to extend the capacity of the six-month-old camp to more than 25,000, while finalizing site selection for a sixth camp in the Dollo Ado area, which already hosts some 157,000 Somali refugees. Many new arrivals are coming with all of their belongings, including donkeys and livestock. They say other family members and neighbors plan to follow.

Earlier in the day, Amina, and her family had looked vulnerable and lost as they sat on a wooden bench in the town of Dollo Ado and waited for a bus to take them the 12.4 miles from the border to Bur Amino. She was carrying her youngest child, five-month-old son Abdul,* in a traditional baby sling on her back, while holding the hand of her daughter Nhala,* aged six. Amina's siblings, Mohamed,* 12, and seven-year-old Sahla* sat next to her on the bench.

She said she had come to Dollo Ado because life had simply become too difficult and too dangerous, especially after her home area came under the control of a strictly conservative militia. The anti-government group imposed taxes and restrictions that made normal life and trade almost impossible.

Amina recalled days when the family had nothing to eat because she was too scared to leave home and go to the market. Her children and siblings contracted diarrhea because they were forced to drink contaminated water from a local creek. But despite the dire situation, the militants would not allow any humanitarian aid into the village.

Leaving the village was a big decision; it was the place where the young woman was born, got married at age 13, and started her own family. It was her whole world, but the food and water shortages and health risks had become a matter of life and death, especially for the young.

The children also faced another danger – forced recruitment. Somali refugees at Dollo Ado say male children aged eight years and above are at risk. "Young boys are abducted and trained to be soldiers," said one refugee at the Dollo Ado transit center.

Amina headed off for the border in mid-June in a rented vehicle, following thousands of others who have sought safety, shelter and assistance in eastern Ethiopia. Many are so poor, they have to walk. Her party included 13-year-old Hassan, a relative from a neighboring village whose parents were worried that he would be forced to become a child soldier if he stayed.

To fund the dangerous journey, Amina sold several precious goats. She said that when they left the village she was worried about what lay ahead. "People travel in groups" for better protection against militant attacks those, she said.

Amina seemed relieved when she met UNHCR staff after crossing the border. She stayed in the transit center for a couple of days, receiving food, ration cards and medical treatment before boarding the bus for Bur Amino camp. UNHCR and its partners will look after the family, which is regarded as particularly vulnerable, but life will never be the same again for Amina and her young brood.

UNHCR's representative to Ethiopia, Moses Okello, meanwhile, paid tribute to the government for providing protection and assistance to new arrivals and pledged to continue supporting this effort. But he added that a solution "lies in finding a lasting settlement to the conflict in Somalia."