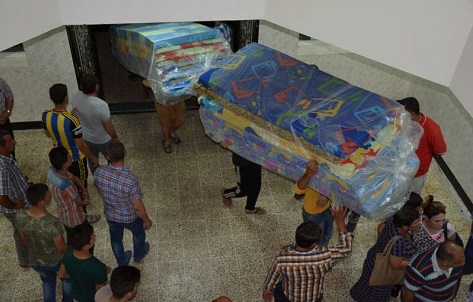 Volunteers like these helped UNHCR distribute 2,500 mattresses, quilts and other emergency relief items to the most recent wave of displaced Iraqis to arrive in northern Iraq's Kurdistan region. These mattresses are being used in a school where 700 of the displaced settled. © UNHCR/E.Colt

ERBIL, Iraq, June 27 (UNHCR) –The UN refugee agency reported on Friday that up to 10,000 people from the predominantly Christian communities of Qaraqosh have fled their homes after mortar rounds landed near their ancient town earlier this week.

Community leaders say the residents of Qaraqosh people fled by bus, car and taxi into northern Iraq's Kurdistan region on Wednesday night. Many are women and children. They are now staying with families, relatives and in schools and community centers. Most are in Erbil. They fled in a rush, with little time to bring belongings with them.

On Thursday night, UNHCR – supported by dozens of local volunteers who brought their own trucks for transport – distributed quilts and mattresses, plastic sheeting and hygiene kits at schools and community centers where the displaced are staying. Already, some 300,000 Iraqis from Mosul's Ninewa governorate and elsewhere have arrived in the Kurdistan region.

This latest influx will place further pressure on resources there, particularly housing and fuel supplies. Conditions for these new arrivals will be challenging. In one school visited by UNHCR field staff, there are already 700 people and more expected.

They have no access to showers and there is no air conditioning. They are living in classrooms where daytime temperatures exceed 104 degrees Fahrenheit. Thus far, food is being supplied by local charities and international aid organizations. Many of the displaced are concerned about the lack of medical care.

So far this year, an estimated 1.2 million Iraqis have been displaced by fighting, including from Anbar and Ninewa governorates. To date, UNHCR only has 8 percent of the funds necessary to meet the needs of refugees fleeing Iraq.