GENEVA, 20 August (UNHCR) – The UN refugee agency said on Tuesday some 30,000 Syrians had streamed into northern Iraq since last week and thousands more were waiting to enter, fleeing communities across a wide swathe of northern Syria. 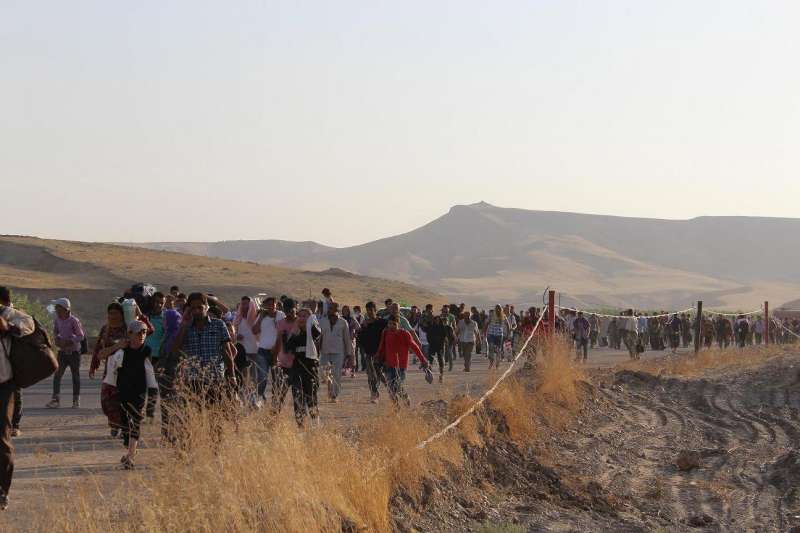 Syrians who fled across the Peshkhabour border into Kurdistan in northern Iraq walk towards a makeshift reception center. © UNHCR/G.Gubaeva

"With several tens of thousands of people having crossed since last week, this new exodus from Syria is among the largest we have so far seen during the conflict, which is now into its third year," UNHCR spokesman Dan McNorton told a news briefing.

"As of this morning, a further 2,000-3,000 people were reported waiting close to the Syrian side of the border, and expected to cross today," he said.

On Monday more than 4,800 people entered at Sahela, some 74 miles northwest of Mosul. Some were from Malikiyye city in the neighboring Syrian governorate of al-Hasakah and told UNHCR they had fled an aerial bombardment that morning. Others arriving over the past few days were from further west, including Efrin and Aleppo, plus Al Hasakah and Al Qamishly.

"As well as people who told us they were fleeing recent bombings, others say they were escaping fighting and tension amongst various factions on the ground," McNorton said. "Also cited was the collapse of the economy due to war and the resulting difficulties in caring for their families."

By the following morning thousands of people had swarmed across the swaying bridge over the Tigris. As of Saturday, UNHCR estimates 20,000 Syrians had crossed the Peshkhabour bridge. McNorton said they were followed by another 6,000 people on Sunday when fleeing Syrians were directed to use the Sahela border crossing, south of Peshkhabour.

In response to the influx UNHCR and partner agency teams have erected shelters to provide shade. Water and food distributions have also been set up at crossing points. The International Organization for Migration and the Kurdistan Regional Government have provided buses and trucks to move the thousands of people from the border zone deeper into Iraq.

In Erbil Governorate, further east, UNHCR has established a transit site at Kawergost with 1,100 UNHCR tents along with 200 tents assembled by the International Rescue Committee. The Kawergost transit site, north of Erbil town and in Khabat District, is now sheltering 7,000 to 9,000 Syrians. The President of the Kurdistan Region, Massoud Barzani, visited the transit site yesterday.

Over the past days UNHCR has dispatched more than 90 trucks with aid from Erbil. Relief items distributed include tents, plastic tarpaulins, sleeping mats, blankets, kitchen sets, hygienic supplies, water tanks, portable latrines, portable showers and electric fans. However, because of the scale and speed of the influx, some people at Kawergost still lack tents and have to camp under tarpaulins or other makeshift shelters.

On Monday authorities provided UNHCR with access to a warehouse in Bahrak, which is now used to house 2,500 Syrians. Land has been identified in Erbil's Qusthtapa district for another transit site. As well as those in tents, some 14,000 people are living with host families or are camped at mosques in the Erbil region.

Further to the southeast, at Sulemaniyah, 4,000 people are accommodated temporarily in 11 schools. As in Erbil, a temporary site is being set up. Some 3,000 people who arrived on Monday were transferred to Sulemaniyah.

On the Syrian side, the border at Sahela is controlled by Syrian Kurdish forces. The Kurdistan Regional Government has identified an additional site in Kushtapa where it has indicated UNHCR may establish another transit camp.

Longer term, in cooperation with the Kurdish Regional Government, UNHCR and its partners are building the Darashakran camp, which is expected to be ready to accommodate refugees within weeks.