South-bound but stranded in Sudan

KHARTOUM, Sudan, January 16 (UNHCR) – At first glance it looks like a junkyard, strewn with piles of broken furniture, rusty metal beams and doors ripped off their hinges. Closer inspection reveals giant padlocked boxes, makeshift shelters and people hidden underneath the constant coat of dust that blows through the Sudanese capital.

UNHCR is offering to help move hundreds of people from Sudan to newly independent South Sudan, where they will build new lives. Almost 250 families with ties to the south are waiting for a ride.

This is the Shajara railway station in southern Khartoum. It is also one of 14 active "departure points" around the capital, and home to tons of luggage and hundreds of desperate people who have been waiting for up to a year to go back to their villages in South Sudan. The last train to leave here was in late October. Six more trains are scheduled in the coming months, and everyone is scrambling to get on the passenger list.

"We have been here for nine months now, we really want to go," said a woman who has made a home for herself in an abandoned train carriage. "My baby was born here three months ago. We call him Railway."

Blinking the dust from his eyes, Baby Railway has no idea what the fuss is about. His family was among the southerners who fled during more than 20 years of civil war between the north and south.

In the months leading up to South Sudan's independence last July, many of those who had sought refuge in Sudan over the years started to move to their ancestral villages, as well as people born and raised in Sudan but with strong ties to the south. After an enthusiastic start – more than 350,000 people headed south between October 2010 and December 2011 – the movement has stalled.

Part of the problem is financial: The South Sudanese government ran out of funds to organize movements, while many southerners in Sudan have lost their jobs since secession and are facing economic woes.

Then there are the logistical problems that caused the pile-up at Shajara station. Decades of neglect have left the rail service between Khartoum and Wau in the north-western part of South Sudan in shambles. A single train plies the more 621 mile-long single track between the two cities.

Breakdowns and derailments are common, such that the one-way journey takes at least two weeks, often longer. Come the rainy season, from June to December, parts of the track will become impassable with overgrown grass.

Separately, some 9,000 southerners heading to the central and southern parts of South Sudan are stranded at the Kosti way station due to a shortage of barges to take them and their massive amounts of luggage down the River Nile.

Even for those people who can afford to move themselves on buses or trucks, the lack of security en route is a major obstacle. Fighting in border areas, especially in South Kordofan state, means that convoys are often robbed or attacked. 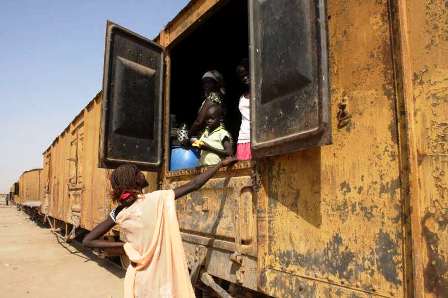 After waiting for over a year to go to South Sudan, some southerners have set up home in abandoned train carriages at Khartoum's Shajara railway station. © UNHCR/V. Tan

"We ask that UNHCR facilitates the transportation and ensures safety along the way," said Deng Bot, a representative of some 40,000 southerners living in Khartoum's Mayo Mandella settlement during a visit by UN High Commissioner for Refugees António Guterres last week.

"We need to find a new way," said Guterres, acknowledging the many obstacles to people going south. "We need for the two governments to agree on a plan to move the most vulnerable people by plane, but with road travel as the main route. This is only possible with proper coordination and adequate security conditions."

In the meantime, 245 desperate families continue to wait in this departure point, an open space in Mayo Mandella with patchwork shelters made of plastic sheets, gunny sacks and bits of cloth. There is little shade from the harsh sun and dusty winds. Water is bought from donkey carts, and there are no latrines, and few health facilities or schools.

Asunta Matia gave up her rented home a year ago when she lost her income as a tea lady. "We were told we'll leave tomorrow, then tomorrow and tomorrow again. But it hasn't happened yet," she said. "When I go back to Wau, I can set up my tea shop again. I want to see my children go to university."

Her daughter Madalena, 26 and a mother of two, has applied to the University of Juba and hopes to study engineering. Her husband and brother have both moved to Wau in South Sudan, but make just enough to send money for food. Neither Asunta nor Madalena know how they will raise the money to go home, or when they will leave.

But Asunta is sure about one thing: "It's not working here. It's better that we leave and find something better in South Sudan."

There are an estimated 700,000 southerners living in Sudan. So far, some 110,000 in Khartoum have been registered to move in an exercise to determine the numbers and destinations, and to identify vulnerable people who may need special assistance.

The UN Refugee Agency and the International Organization for Migration co-chair the Returns sector, focusing on the registration of people who wish to go to South Sudan, in coordination with the Khartoum-based Commission of Voluntary and Humanitarian Work. The two agencies also provide life-saving assistance and protection monitoring at way stations, departure points and along the road.

As the April deadline approaches for southerners to acquire Sudanese residency permits, the Returns sector has also been encouraging the governments of Sudan and South Sudan to issue nationality and residency documentation for South Sudanese remaining in Sudan, and to implement fair procedures to determine nationality with safeguards to prevent statelessness.