YUSIF BATIL CAMP, South Sudan, August 29 (UNHCR) – Haram Yakub, 25, sits on a hospital bed holding her infant daughter to her breast. After more than a week of being unable to keep anything down due to diarrhea, 11-month-old Nancy begins to feed. 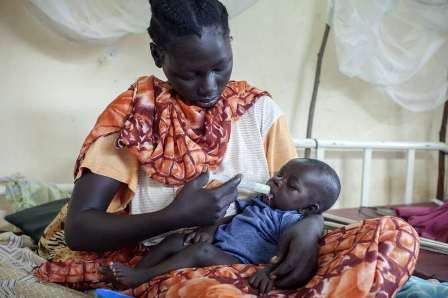 A Sudanese refugee mother treats her severely malnourished child, who is also suffering from diarrhoea, in the stabilization center of Bunj Hospital, Maban County, South Sudan this month. © UNHCR/B.Sokol

Watching Nancy rally in South Sudan's Yusif Batil camp is a relief. But Yakub's trauma remains. It is a fear so powerful that she can only remember little things; that she was once a farmer in her hometown of Jam in Sudan's Blue Nile state. She remembers that Nancy has been receiving treatment for eight days in the hospital's stabilization center.

At the camp's play center, a young girl dances with her friends, singing about how the people of her village in Sudan had to flee the conflict. Suddenly, she grows weak and faints.

She has had a thorn in her ankle since she made the journey across the Sudan-South Sudan border several months ago. The leg is infected and bright yellow puss can be seen underneath her skin. She too suffers from diarrhea. Nearby, a teacher brings her child with her to class. The baby is also recovering from the ailment. The teacher gives her water mixed with oral rehydration salts.

At a mobile health clinic, health workers take the weight and height of children. Many show symptoms of malaria, others are malnourished or with diarrhea. Some have all three. Some of the clinic staff as well as workers with UNHCR and other organizations are also suffering from the dangerous health condition.

A few weeks ago, UNHCR accomplished the challenging task of moving 32,000 refugees from the Sudan border to this camp under appalling conditions. Now the agency is working vigorously to combat a serious health crisis.

With the onset of the rainy season, the refugee agency and its partners have been keeping an eye open for outbreaks of diseases such as malaria, cholera and viral hemorrhagic fever. The nutritional status of the refugees at Yusif Batil is weak and preparations are being made to head off a cholera outbreak.

An army of 200 alert community health workers go house to house while a hospital dedicated to the treatment of cholera has been set up with the capacity to accommodate as many as 300 beds. Two more facilities with a capacity for up to 50 beds are also ready to go. More than 20 stations have been set up to provide oral rehydration salts for diarrhea patients.

About 60% of Yusif Batil's 34,000 refugees are children. And 40% of those under five years old are suffering from some form of malnutrition. As many as 15% of this age group are severely malnourished. Meanwhile, the mortality rate for people aged over 50 years of age in the camp is 4.7 per 10,000 per day – nearly five times the normal rate.

"We have a vulnerable population with a lot of external threats," says Maria Pillar, a doctor with UNHCR. "We need to create a health system for them in a very short period. We need time. But they don't have time."

Rain is also an enemy. It keeps people from fetching clean water, from going to health posts, from attending school. Puddles of water are breeding grounds for malaria-bearing mosquitoes. Children who are moderately malnourished catch a cold and are too weak to combat disease.

There is an urgent need to increase food rations in both quantity and quality to rebuild the health of those who have arrived over the past several weeks. "The refugees need a bigger amount of calories in a smaller amount of food," as Pillar puts it.

UNHCR has made the distribution of food and other nutritional items its number one priority. The World Food Program has prepared for blanket distributions of a vitamin-fortified corn/soy blend. Additionally, a series of airlifts of critical foods has been planned.

On a recent sweltering Wednesday morning almost 12.5 miles from Yusif Batil, a cargo plane lumbers over an open field filled with grass and drops its UNHCR cargo – 36 tons of cereals. It is a lifesaver for the tens of thousands of refugees in Yusif Batil and Doro, the other large refugee settlement in Maban County.

"It's important when we're giving out these items that we observe people eating it," says Brendan Dineen, public health officer with UNHCR. "These items need to be consumed by the malnourished child and not shared among family."

The effort to control disease also includes a scaled up distribution of mosquito nets, sleeping mats and blankets. A child who is warm stands less chance of catching cold. An elderly woman with netting has some protection against malaria. A total of 16,000 mosquito nets, 14,000 blankets and 7,100 blankets have been distributed.

As part of its health drive, UNHCR is also working to increase water availability. In Yusif Batil, about 2.5 gallons of water are consumed on average per person each day. Specialist agencies are working with UNHCR to establish a water supply and distribution network across the camp. "If you have to walk a half mile to carry 88 pounds of water [as many people do] and you have a puddle in front of your home, you might choose the puddle," said Dineen. "We're working to increase access to drinkable water."

Water and sanitation have been coupled with a series of messages about washing hands, using facilities and drinking clean water. "The community in Batil is talking about hygiene," said Dineen. "In that way they are becoming the cause of their own cure."

Donate now to help save the lives of refugees fleeing conflict between Sudan and South Sudan!