GENEVA, 16 August (UNHCR) – Thousands of Syrians have streamed into northern Iraq in a sudden movement across a recently constructed bridge as the total fleeing war continues to rise, the UN refugee agency said on Friday. 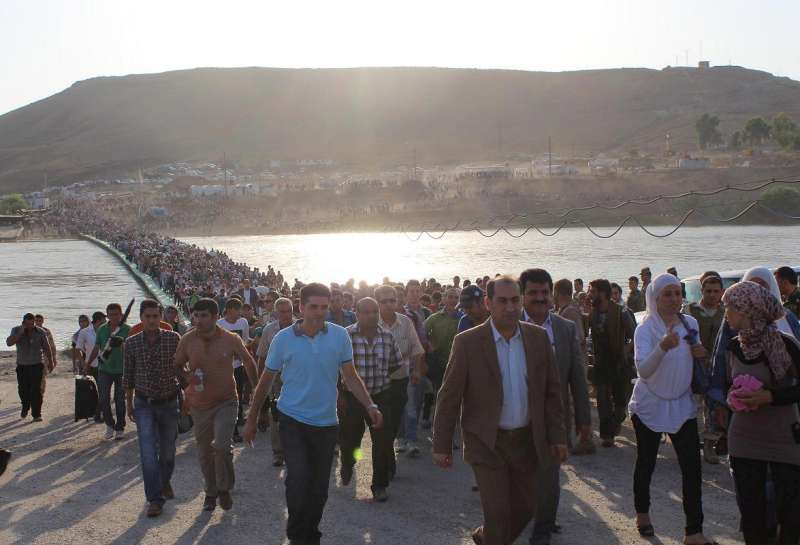 Thousands of people flowed from Syria across the Peshkhabour border crossing into Iraq's Dohuk Governorate © UNHCR/G.Gubaeva

UNHCR field officers reported the first group of some 750 Syrians crossed over the pontoon bridge at Peshkhabour at the Tigris River before noon on Thursday but in the afternoon a much larger group of 5,000 to 7,000 people followed.

"The factors allowing this sudden movement are not fully clear to us at this stage and as of this morning we are not seeing further large scale crossings," UNHCR spokesman Adrian Edwards told a news briefing in Geneva.

Some of the Syrians had reportedly been waiting near the Tigris River for two to three days, camped at a makeshift site. UNHCR monitors at the border saw scores of buses arriving on the Syrian side dropping off more people seeking to cross.

Edwards said both the Syrian and Iraqi sides of the frontier at the Peshkhabour crossing are normally tightly controlled.

The vast majority of the new arrivals are families -- women, children and elderly -- mainly from Aleppo, Efrin, Hassake and Qamishly. Some families told UNHCR they had relatives residing in northern Iraq, and some students traveling alone said that they had been studying in northern Iraq and had only returned to Syria over the recent Eid holidays.

"UNHCR and partner agency teams, together with local authorities, worked into the early hours of this morning to aid the new arrivals," Edwards said. UNHCR, its partners and the authorities provided water and food; IOM and the Kurdistan Regional Government provided hundreds of buses to move the refugees onwards to Dohuk and Erbil.

At Erbil, about 2,000 of the new arrivals are now encamped at a site in Kawergost town where UNHCR has established an emergency transit/reception area. Some new arrivals are sheltered under tents already installed by UNHCR. Other new arrivals are reportedly staying in mosques or residing with family or friends who reside in the area, the UN refugee agency said.

UNHCR is working with the Kurdistan Regional Government authorities, other UN agencies and NGO partners to establish a camp at Darashakran a short distance from the emergency transit site.

"This should open in two weeks, and our hope is it will relieve pressure at the crowded Domiz camp and enable refugees currently living in costly rented accommodation to move to a UNHCR-assisted camp," Edwards said.

UNHCR thanked Iraqi authorities and particularly the Kurdistan Regional Government for their involvement in negotiations to permit the new arrivals to cross and the transport and other assistance that was provided at the frontier.

"As of today 1,916,387 Syrians have fled the war and registered as refugees or applied for registration. Two-thirds of these have arrived this year," Edwards said.

Governments in the region are carefully managing their borders with Syria, mainly due to their own national security concerns, but refugees continue to cross into neighbouring countries in a gradual manner. UNHCR has urged countries in the region and further afield to keep borders open and to receive all Syrians who seek protection.