TEL SHIHAB, Jordan, June 12 (UNHCR) – The tears are falling before Hala has even crossed the border. At the moment she enters Jordan, dragging a large black bag with all of her possessions, she lets out a heart-wrenching sob. 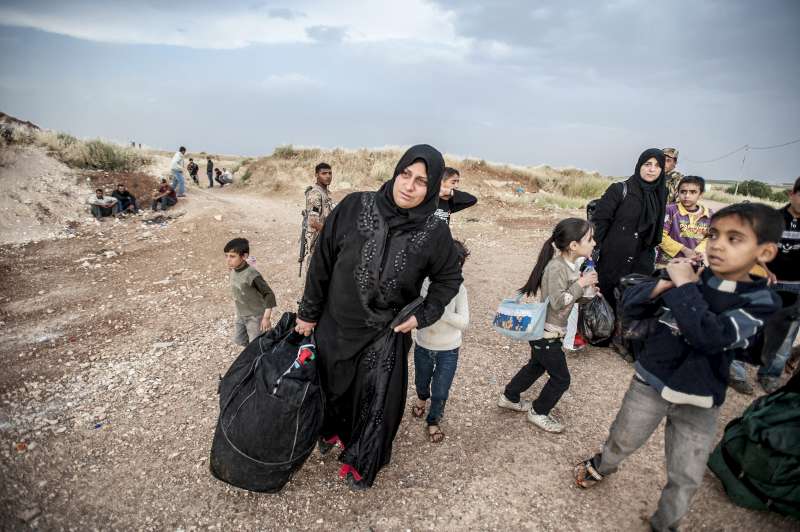 When Hala crossed the border into Jordan, dragging a large black bag with all of her possessions, she let out a heart-wrenching sob. ©UNHCR/S.Rich

Nothing has prepared Hala for becoming a refugee. Now, with her eight children, her sisters and their little ones, she is far from her home in the city of Homs and her husband is still in Syria.

Today, UNHCR field staff are meeting new refugees on Jordan's northern border with Syria. Along with the Jordanian military, they comfort Hala's younger children and help carry their luggage away from the border near Tel Shihab.

After more than two years of vicious civil war in Syria, the soldiers at the border have seen daily flows of people crossing into Jordan. They know all too well the heartbreak, stress and trauma faced by those fleeing. More than 1.6 million Syrians have fled their country since March 2011 and sought shelter in neighboring countries, including more than 470,000 in Jordan.

"We are all just so exhausted," says Hala. "My children are hungry and tired. We haven't had enough food for weeks and they have all seen more than they should. I worry for them. I worry for my country."

Hala's youngest child, Hiba, is just six months old and the conflict in her homeland has been raging her whole life. Perhaps sensing her mother's fear and upset, tears roll down her rosy pink cheeks and catch in her long dark lashes. But, she doesn't make a sound and her siblings are equally quiet and watchful.

"We don't know what will happen to us now. I hope the fear will pass and that we will be safe now that we are in Jordan. But I also hope that the war will end and that we can go home again. I hope, Inshallah," Hala says.

Her resilience and strength are clear – she has held her family together from Homs to Damascus, and now in Jordan she will do it again. Gently she wipes the tears from her face and, clutching the hands of children, moves off to find some space to rest before the next step of their journey to Za'atri refugee camp, which is now home to more than 100,000 refugees.

UNHCR has dedicated and compassionate staff working on the ground, around the clock, providing care, support and essential relief supplies to refugees like Hala. But, as the war in Syria rages on and thousands of people continue to arrive every day, the agency's resources are increasingly stretched.

Last Friday, UNHCR, other UN agencies and dozens of humanitarian organizations called on donor nations and other supporters to provide billions of dollars in additional funding to help the millions of desperate Syrians inside and outside their country. UNHCR and its partners need $2.9 billion to help refugees in the surrounding region this year.

At this time, every donation will make a difference and a gift of just $20 could help pay for mats to prevent two families from having to sleep on the ground. Refugees like Hala, her children and her relatives need your help today.