BEIRUT, Lebanon, September 12 (UNHCR) – On the second day of a joint visit to countries hosting tens of thousands of Syrian refugees, UNHCR chief António Guterres and Angelina Jolie heard about the difficulties people face in escaping war-torn Syria and the challenges of finding shelter for them in Lebanon.

Guterres and Jolie, his Special Envoy, visited the Bekaa Valley neighboring Syria on Wednesday morning and met some of the 67,000 registered refugees in Lebanon as well as members of host communities.

In the afternoon, they held talks with top officials, including President Michel Sleiman and Prime Minister Najib Mikati, on the situation and challenges facing Lebanon and the humanitarian response from UNHCR and others.

At a press conference after these talks, Guterres paid tribute to Lebanon for helping so many people at a time when it faced its own acute economic and security concerns. Urging the international community to help shoulder the burden, he said: "It is in everyone's interest to support not only refugees, but also the states of the region." 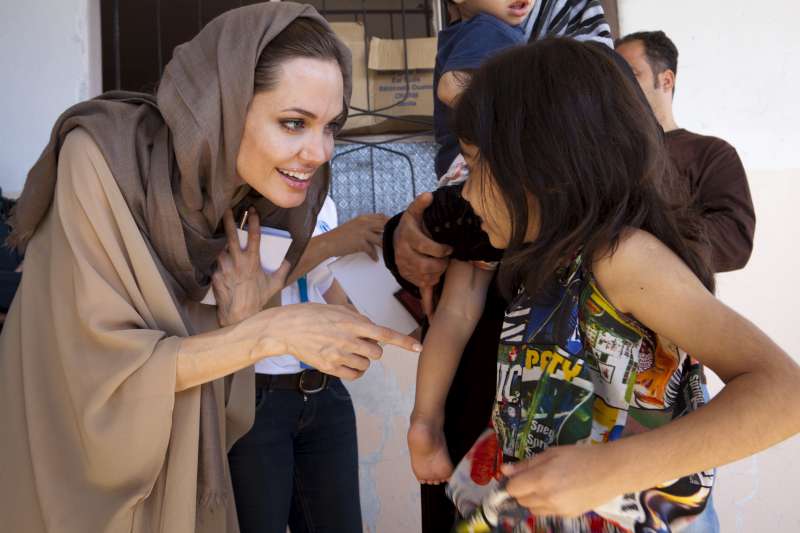 At the same briefing, Jolie spoke about her meetings earlier in the day with refugees living with host families near the Lebanon-Syria border. "I was moved to meet Syrian families … in homes where they are welcomed and protected," she told journalists.

Jolie met three women who had crossed to Lebanon with their children while their husbands remained in Syria because they feared being killed if they attempted escape. One woman tearfully described a four-hour trek to the border after she had told her children they were going to visit relatives in Lebanon. "They lost so much," she said. "I just didn't also want to break their hearts."

The Special Envoy and Guterres also heard from the refugees they met about the risks and terror they faced heading for the border on escape routes, including constant shelling and harsh security checks. One man left his mother, sister and 15-year-old brother behind because the teenager lacked ID to get through checkpoints or the border. A young woman they met was recovering from a gunshot wound to her stomach. Her fiancé told the group she was shot while shopping for her planned wedding in Damascus.

The UNHCR visitors also heard about the chronic problem of providing shelter for the growing number of refugees crossing into areas with limited hosting capacity. Many people have been staying in schools, but these need to be vacated because the academic year is about to begin. The government is considering a UNHCR plan to use vacant buildings, land and cash for rent.

Guterres and Jolie also heard stories of Lebanese families voluntarily driving to the borders to pick up displaced families and take them back to their homes. Some have been sharing their small apartments since the conflict began 18 months ago.

In one village, Guterres met a 77-year-old man who offered room in his house to a family rent-free. "I was struck by his generosity at a time when communities are becoming increasingly stretched in their capacity to host refugees," stressed Guterres. In his meetings with government officials, the High Commissioner asked for approval of the alternative shelter options as a matter of priority.

With children making up more than half of the refugee population, and the school year about to begin, UNHCR and the UN Children's Fund (UNICEF) have launched back-to-school campaigns for refugee children. Syrian children are also being helped to adapt to the Lebanese curriculum and the French language.

To show her particular concern for refugee children, Jolie visited the Bar Elias School where UNHCR and Save the Children run remedial classes and provide psychological and social support. Many of the children have missed up to two years of school and are traumatized. Lebanese children also attend the program to promote integration.

Every day, some 1,000 refugees request registration appointments from UNHCR. To ensure that refugees are quickly registered and assisted, a new mobile registration team was established in the Bekaa Valley city of Baalbek last week, and a registration center opened in Tripoli on the coast last month.

UNHCR will also establish a presence in the south of Lebanon, where some 7,000 refugees are believed to be residing. In the meantime, UNHCR continues to provide food vouchers and non-food items, shelter improvements, health subsidies and education grants to all refugees who approach its offices.

Guterres and Jolie visited the Za'atri refugee camp in Jordan on Tuesday.