AKCAKALE, Turkey, November 7 (UNHCR) – Some 200 metres from no-man's land, and the war zone beyond, stands a dusty street lined by modest houses, shops, garages and an office. Outside the office a crowd waits under the scorching sun for an aid distribution. 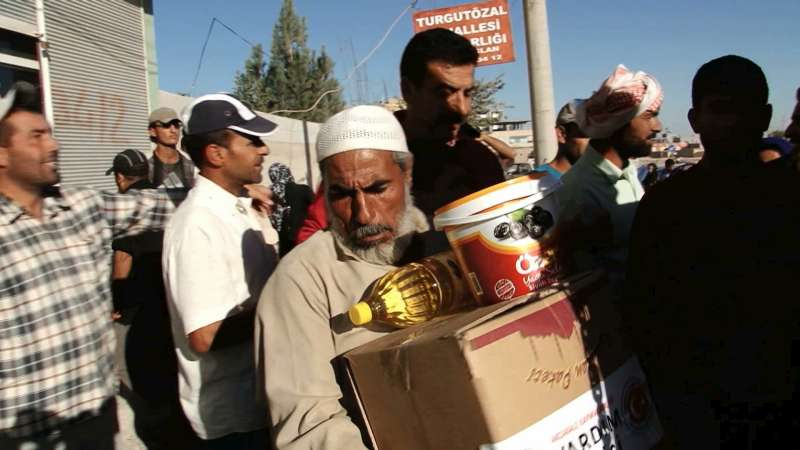 They are among the 10,000 registered Syrian urban refugees who have made their home in Akcakale, a southern Turkey border town of more than 35,000 people before the influx. Just down the road another 30,000 Syrians live in a crowded refugee camp set up by the Turks with tents and equipment from UNHCR.

The crowd outside the office in Mahmut are waiting for a truck to arrive with relief items collected by private citizens and non-governmental organizations. Armed with a registration card, each family will be given oil, sugar and a box of basic foodstuffs.

As the refugees continue to pour into Turkey, UNHCR is helping by providing 23 mobile registration centers around the country, along with more blankets and stoves for the winter.

A key figure among the local aid organizers is Mahmut Yalçinkaya, a burly man with a thick black moustache. He waits with the refugees for the aid. A Turkish Arab, he first began organizing private aid efforts from Istanbul, where he had a tourism business. As the war in Syria dragged on, he left his job and moved back to his home province in the south to concentrate on the aid efforts.

"At the beginning we didn't think it would go on so long," he says. "I had friends in Syria who fled the war. But the situation continued. We couldn't stand apart from it because we come from the same people. There's no difference between us."

Mahmut first delivered aid right across the border, sometimes accompanying the precious cargo to the border crossing. Then it became too dangerous. "We were delivering assistance and someone [on the Syrian side] sprayed us with gunfire. I was wounded in the leg. One policeman was killed and 13 people were injured," he recalls. "But we would not stop offering help because of such incidents."

He would, however, stop sending aid packages across the border because very little of it was getting to the people in need. Instead, he began lodging refugee families in his large family house in Akcakale.

When the aid truck arrives, Mahmut helps members of the three families he is hosting to present their registration cards and get their aid, and then packs the boxes and bottles in his car and drives them home.

One of the men who came with Mahmut is Wahid, a 70-year-old from just across the border. He fled the fighting seven months ago with his daughter and her family of six. She and her older children are working in the fields picking cotton to earn a little money for the approaching winter.

The accommodation is rudimentary, four rooms on the ground floor, bare cement walls and floors with mattresses piled in a corner. In these rooms, 30 men, women and children have been living for months. Still, it's better than the conditions that several other families must endure, sleeping in a park, in garages or, in one case, in a tent made of blankets under a skeletal tree a short walk from the border.

Wahid remembers with gratitude his first meeting with Mahmut in Akcakale. "He was driving and we flagged him down with our bags beside us. He asked us to come with him and brought us to his house and insisted that we stay." Vahta, grandmother of a family of 14 all under Mahmut's roof, is also thankful. "If it hadn't been for Turkey, where would we have gone? Without Turkey we would have died."

In the late afternoon, the aid safely stored, Mahmut feeds his chickens and geese and reflects that he never expected the war or his aid efforts to go on so long. The world, he says, must do much more. Turkey has done more than its part. But in the next breath, he says he will never abandon the Syrians.

By Don Murray in Akcakale, Turkey