Number of Syrian refugees triples to 300,000 in only three months

GENEVA, October 2 (UNHCR) – The UN refugee agency announced that the number of Syrians registered or awaiting registration as refugees in Jordan, Lebanon, Turkey and Iraq has passed 300,000, triple the level of just three months ago.

"The latest figures show a total regional registered population of more than 311,500 Syrian refugees in the four countries, compared to around 100,000 in June," UNHCR spokesman Adrian Edwards told journalists in Geneva. 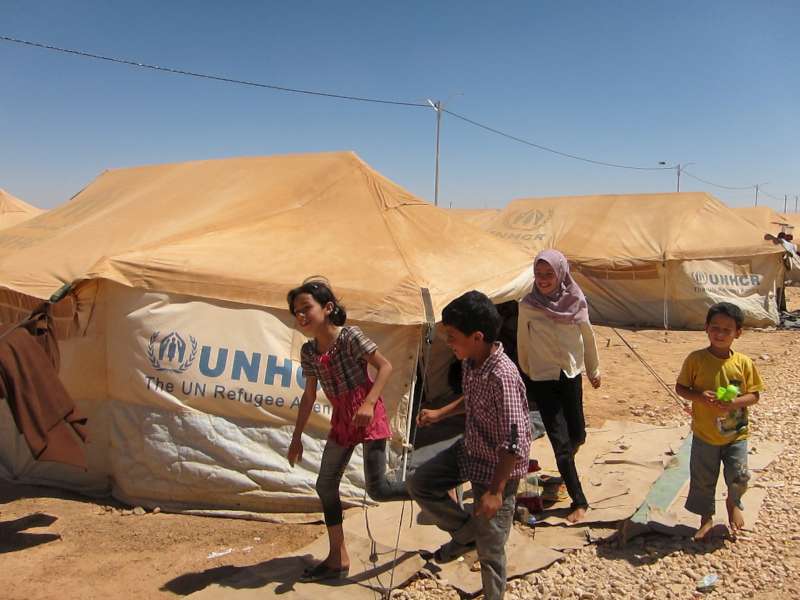 The continuing rapid growth in refugee numbers underscores the urgency of last week's revised Syria Regional Response Plan seeking $487.9 million in support of up to 710,000 Syrian refugees in neighboring countries by the end of this year.

The generosity and hospitality shown by these countries as they struggle to cope with growing numbers of refugees make it essential that the international community provide as much support as possible. Many refugees and the communities hosting them are already running out of resources.

"Compounding the urgency is the upcoming onset of winter temperatures across the region in less than 10 weeks from now," Edwards said. "We are in a race against time. In Jordan, for example, where thousands are living in tents, the average low temperature between mid-November and mid-March is 35° F. A winterization plan is being developed, but it too requires support and funding," he added.

A set of warm blankets for a Syrian refugee family of 5 costs just $11. Syrian Refugees in Jordan

Jordan is currently hosting 103,488 Syrians who have either registered or are awaiting registration – four times more than in June. The new regional response plan estimates some 250,000 Syrian refugees will need assistance in Jordan by the end of the year.

Some 65% of Syrian refugees currently receiving or seeking assistance in Jordan are in urban areas, while the remaining 35% are in the new camp at Za'atri and other smaller facilities. Since it opened just two months ago, Za'atri has received more than 30,000 people.

In many cases, those living on the local economy are finding it increasingly difficult as their resources dwindle. A growing number of Syrians struggling to live in urban areas have contacted UNHCR in Irbid, Ramtha, Mafraq and Zarqa, most of them worried about possible eviction. The vast majority of new arrivals are poor and in need of some kind of humanitarian assistance.

UNHCR and its partners offer a variety of programs to assist urban refugees in need, including cash assistance and the provision of a package of household items. Since March, some 55,000 Syrians have received aid items, while cash grants have gone to more than 2,600 of the most destitute families. Syrian Refugees in LebanonThe number of registered Syrian refugees and those awaiting registration in Lebanon is now more than 80,800 people. The Lebanese government estimates that, in addition, tens of thousands of Syrians have entered the country this year and not yet returned. Registered or not, they all live on the local economy – often depending on relatives or their own resources.

It is expected that an increasing number will be seeking assistance in the coming months as the resources of refugees as well as their host families become seriously stretched. Thus, the revised Syria response plan estimates a registered Syrian refugee population of 120,000 by the end of 2012.

The scattered nature of the Syrian refugee population in Lebanon is posing challenges in providing assistance in often remote areas. Some 56% are residing in the north, 41% in the Bekaa Valley and the rest in Beirut and the south. Many of the hosting communities are among the most economically depressed in Lebanon.

As numbers increase and the winter months approach, needs are increasing and becoming more acute.

UNHCR and partner agencies are rolling out a winterization program aiming to provide refugee families and vulnerable Lebanese with fuel for heating, mattresses, blankets and clothes as well as refurbishment to accommodations. Syrian Refugees in Turkey In Turkey, government figures put the number of Syrian refugees registered and assisted by the government in camps at more than 93,500. Several thousand more are known to be residing outside the current 13 camps. Under the revised response plan, Turkey could be hosting up to 280,000 Syrian refugees by the end of this year.

In addition to the influx of Syrians, Turkey has also seen an increase in the number of urban asylum applications over the past 15 months – many of them related to the crisis in Syria. The new arrivals consist mostly of Iraqis, Iranians, Afghans and others who have come to Turkey seeking protection. Syrian Refugees in Iraq

A total of 33,704 Syrians have been registered in Iraq, including 4,263 in the past week. More than 28,000 are Syrian nationals of Kurdish origin who have arrived in the Kurdistan Region. Further south, at Al-Qaem, Anbar governorate, more than 5,600 Syrian nationals have sought asylum since the Baghdad government opened the country's borders in late July.

Initially, many of those fleeing into the Kurdish Region were single refugees. Recently, however, there has been a growing proportion of families among the new arrivals. The revised regional response plan estimates that up to 60,000 Syrians may be in need of protection and assistance in Iraq by the end of the year.

Learn how you can help UNHCR provide shelter, safety, and medical care to families fleeing Syria!