“I’m a hard-working man and I was working in a factory back in Honduras before the gangs arrived,” shares Alberto,* an asylum-seeker from Honduras, now living at the El Buen Samaritano (The Good Samaritan) shelter in Juarez, Mexico.

“Before the gangs, there was a moment when everything was good.”

In October, USA for UNHCR staff traveled to Mexico to meet asylum-seekers from Central America who have fled violence and persecution. We spoke with Alberto and his son, Jose, 15, in El Buen Samaritano’s recreation room that also serves as the shelter’s cafeteria, school, and on Sunday, a place to gather for church. 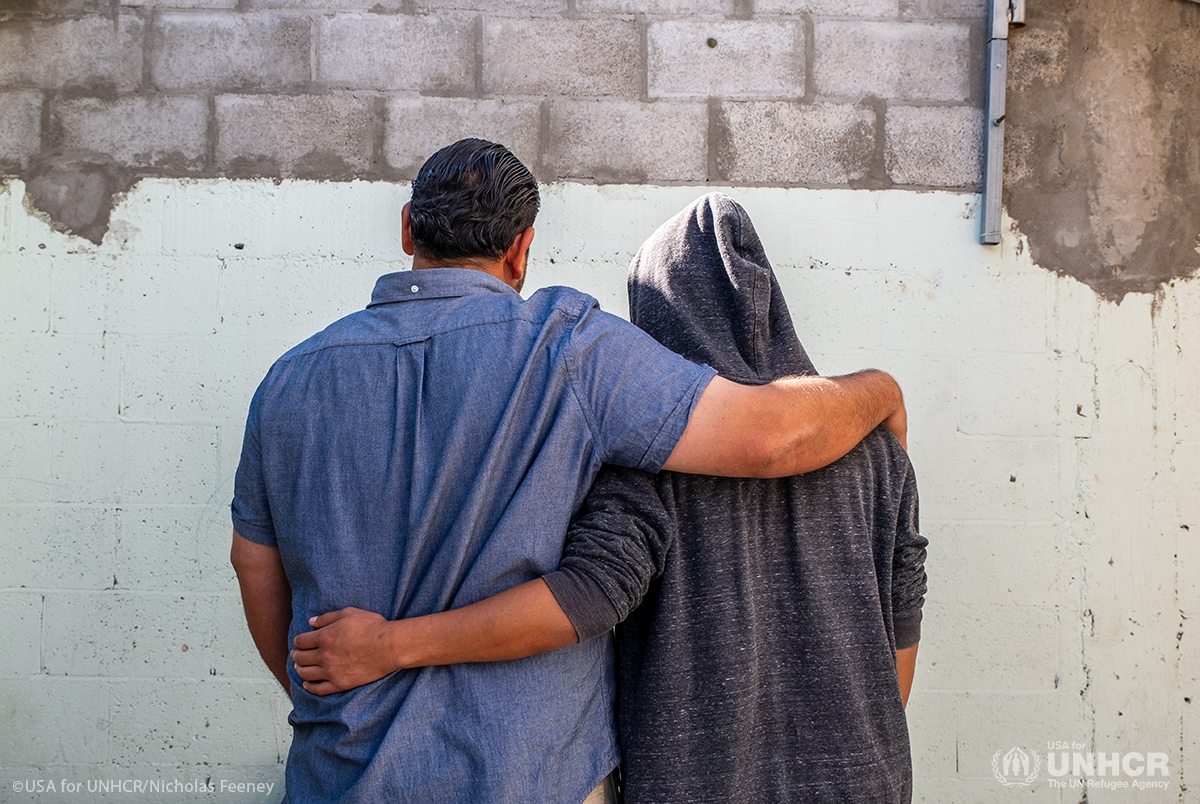 During our conversation, shelter director Padre Juan Fierro briefly interrupts to ask Alberto for a set of keys. He produces a set of keys from his hip that suggests he is not only trusted by Padre Fierro but plays a vital role at the shelter. Alberto explains that he serves as kind of a jack of all trades handyman at El Buen Samaritano. He and his son have been at the shelter for more than a year, and Alberto says that this is his way of giving back to Padre Fierro and a way to help other people staying at El Buen Samaritano.

Despite the relief of safety, living at the shelter is not the life Alberto envisioned for himself and his son when they fled Honduras more than a year ago. Back home, Alberto’s life was in danger.

“When the gangs arrived they started to threaten me and demand money,” he explains. “They told me I had one week to pay or they would kill me.” He decided to flee Honduras taking with him his son.

And even though he fled more than a year ago and is more than 1,500 miles away from the threats of the gangs, Alberto struggles to hold back his emotions during the conversation. He shares that he suffers from depression because he hasn’t seen his wife and other two children in more than a year.

When asked why he brought his son, Alberto says that he heard back in Honduras that people were being let into the U.S. if they were traveling with a minor. Sadly, when he arrived, he discovered this was not true.

Alberto initially wanted to seek asylum in the United States but after arriving at the U.S. border, he and his son were sent back to Mexico under provisions of the Migrant Protection Protocols (MPP), often referred to as the “Remain in Mexico” program. Under MPP, individuals who are seeking asylum and arrive to the United States at the border are sent back to Mexico where they are required to wait until their asylum cases are processed, which could take years.

For Jose, life at the shelter is not always easy. “It’s been difficult because I haven’t been able to go to school,” he shares. “I try to distract myself by using my phone.” He says that he has made some friends at the shelter and in the neighborhood and that it has helped him feel more welcomed.

The future for the father and son remains unclear as their asylum case is still pending. While he still has hope he will be granted asylum in the U.S., Alberto understands it could be months or even years until his asylum case is finalized. He is resolute about not returning to Honduras because of gang violence but is nevertheless conflicted because he misses the rest of his family.

The humanitarian situation at the U.S.-Mexico border is complex but one thing is simple -- families like Alberto's who are fleeing violence and persecution deserve our compassion. Get the facts about the U.S. asylum and border policies impacting the situation in our latest explainer.