BEIRUT, Lebanon, Aug 7 (UNHCR) – Mosalsalats, or TV soap operas, are a staple of Ramadan across the Arab world, and Syrians fleeing the bitter war in their homeland see no reason to stop the tradition. 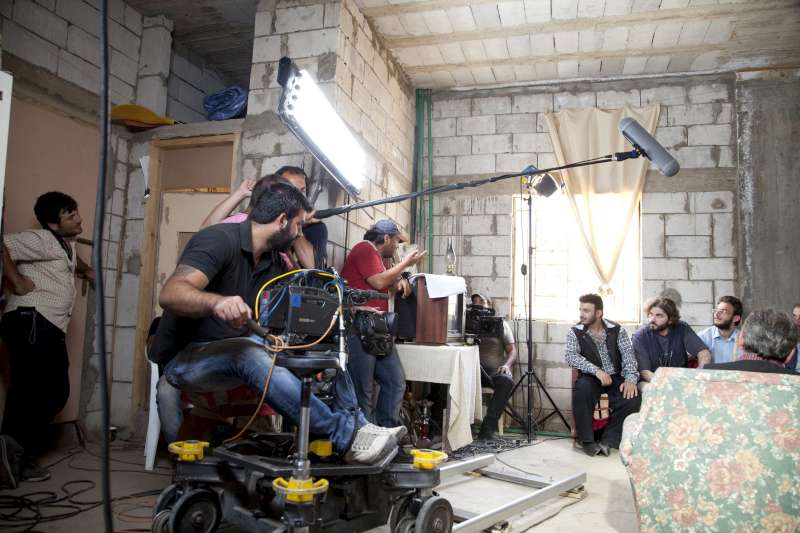 On the set of a Ramadan soap opera in Lebanon, the Syrian cast and film crew listen to the director's comments.© UNHCR/E.Dorfman

After iftar, the evening meal when Muslims break their fast during the current month of Ramadan, tens of millions of people across the troubled Middle East unwind by watching a soap. In general, the stories are about Arab heroes and celebrated battles and are an integral – and highly anticipated – part of Ramadan.

And Syria is famous in the region for its TV soaps. Before the conflict began in March 2011, the small-screen series were one of the country's most prized exports and their production companies were highly respected. "Syrian TV shows during Ramadan used to be famous all over the world," said one Syrian in exile.

Now, with the industry nearly shut down in Syria, some of the productions – and their casts and crews – have moved to Lebanon to be able to continue working.

Most cannot go back to Syria.

Although they are financially better off than the majority of refugees, those who fled could face a tough reception should they return. "There is a black list of actors [on the internet]," explained the Syrian observer.

But in Lebanon, they are resuming their work and continuing the tradition of telling the stories so integral to their culture. Saifeddine Al Sibaii, now working and living in Lebanon, is filming his latest soap, "Al Wilada Min Al Khasira," ("Giving birth from the hip") outside Beirut.

A UNHCR staff member visiting the crew and cast on location, took photographs of the actors being filmed in an abandoned building. In the script, they were holding someone from their community hostage because he had sided with the government, which they believed had failed to complete promised new homes for the people. The wait has been long and tensions are running high.

This is the basic storyline for the third part of a series on social issues that has been shown each of the last two years during Ramadan. This year it is being broadcast across the region by a cable station based in Abu Dhabi.

In this soap, which is very popular, Al Sibaii is referencing the Syrian war and the effect on its people. The director says the script obliquely asks: What should we as a people do? Can we keep going like this? Can we talk? Do we continue to sit back and kill each other or is there another solution?

Although Al Sibaii has left Syria, he says that in his heart he is still there. He is engaged with filming and work, but says that he and all of the actors worry about what's going on in their country and they are often depressed. They are displaced and uncertain what their future will bring.

The female director Abeer Esber has been working in recent weeks on her Ramadan drama, "Al Obour," ("The Transition") in a mountainous region of Lebanon. Although she is telling a traditional story, it has a sci-fi slant, which is an unusual approach to a traditional saga.

The basic storyline is told through an alien who is looking for a new world, one that does not have a ruler or people to be ruled. At the end of the story, after the country has been wrecked, the alien promises that she will get the citizens back to where they began before the acts of destruction.

Throughout Esber's dramatic script she asks the viewers existential questions: What is homeland? What is power? Why do people have to suffer from the mistakes of others?

Esber has been living and working in Lebanon for the last six months. Many of the actors in her production must remain quiet – shunning all interviews – in order to continue working. Esber and her actors grieve that the arts sector in Syria has been destroyed. "Each day I have to start all over again to motivate everyone, but the actors are professionals and they do their jobs very well."

By Elena Dorfman in Beirut, Lebanon