For most of us, school was something we took for granted, and for some, perhaps, something we loathed. But for a group of Sudanese refugee boys, it’s something they’re working hard for, giving up every weekend during the rainy season to fish the flooded mud flats with the hope of catching enough to help their families eat — and to buy books and pens, so they can participate in school.

They have no choice. They were forced to leave comfortable, settled lives — and their schools — when fighting broke out between rival groups in Sudan.

“I was living in Bentiu there and things were okay,” Dictor says. “We were at school and my father was working and bringing us some money so that we could study. Then there was this war that started between the Dinkas and the Nuers. It is nothing to do with most of us, but it became very dangerous there. People were being killed everywhere. We had to run, without even carrying one piece of our property.”

Now, Dictor and his friends Yacob, Guor and Miakol live near Yida, South Sudan where there are 70,000 refugees — many from Sudan — and conditions are harsh. And they recognize that education is the only way they can better their lives. 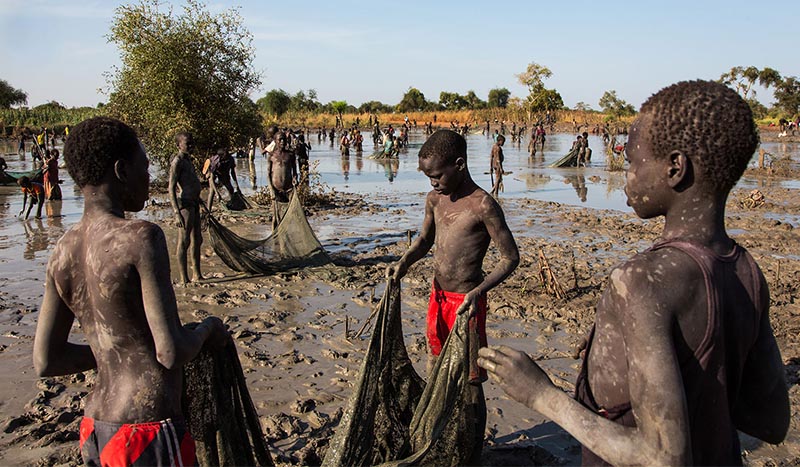 The boys get up early to wade in the shallow seasonal lake, driving mudfish toward the nets. Then they use sticks to subdue the fish so the fish don’t get away. “I just watched others doing it, and then I learned how,” says Guor Path, 14. 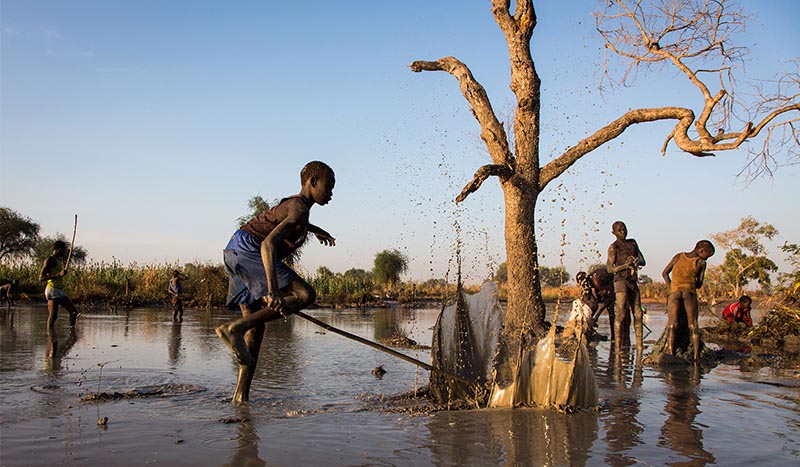 He continues, “It is not hard, but you do not earn a lot of money, and the place is far from home. We stay there alone.” 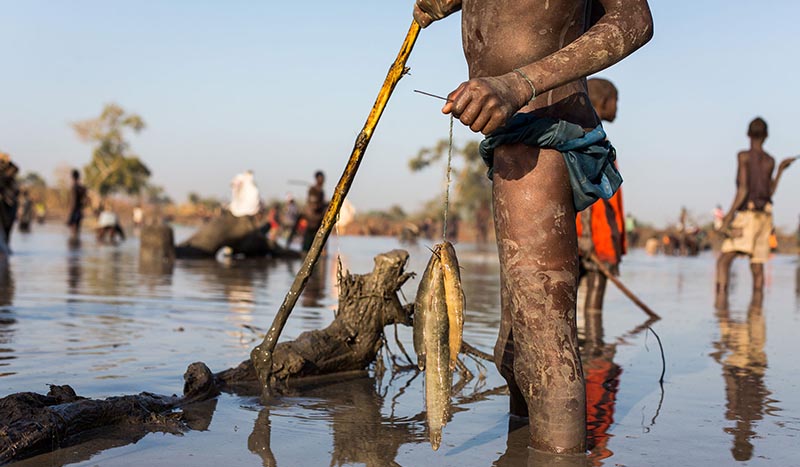 “We go for three days and come back on Monday morning for school.” School is the way out, the way ahead, and no one knows it better than these boys. They have dreams, and they have hopes. And the only way they will make their lives better is with education. 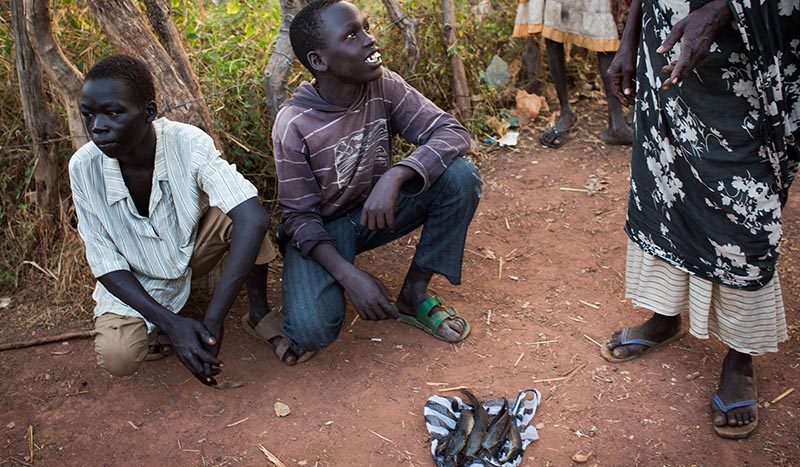 With their catch in hand, Kir Buth, 15, Guor, and Dictor Arak, 15, head for the market. They hope their fish will bring in enough to provide some much needed money for their families, with some left over for pens and books. 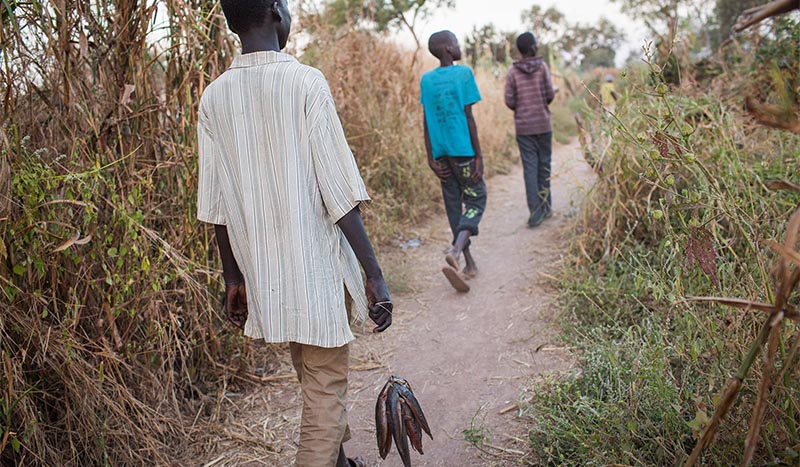 Every fish sold is another step toward the future, one that would be impossible without education — the future that seemed lost when they were forced to flee. “When we arrived here we had nothing, no clothes we carried, no pots, no school books, so we had to go fishing,” Miakol says. It is helping. The boys are – happily! –back in school. 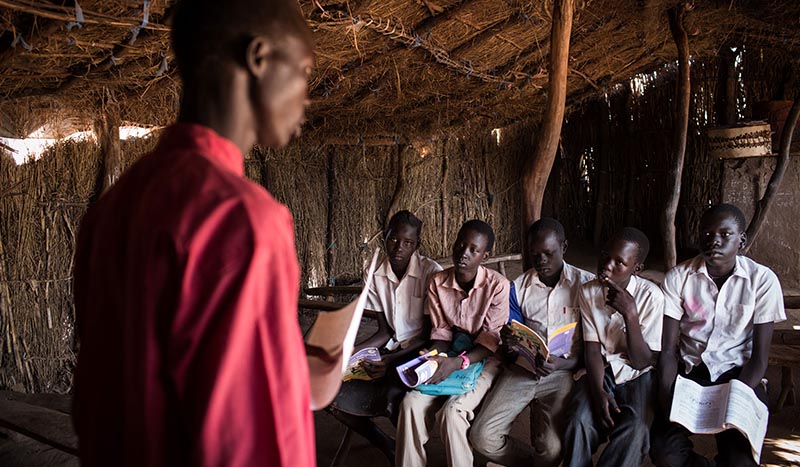 “I do not want to interrupt my schooling further,” says Dictor, who is planning to become a doctor. “I was away from class for four months. I need to catch up. But all of my books were lost, so I had to start over again. That’s why I fish. With the money I buy food for the family first, but then also I put it to savings to pay for school materials and fees.” 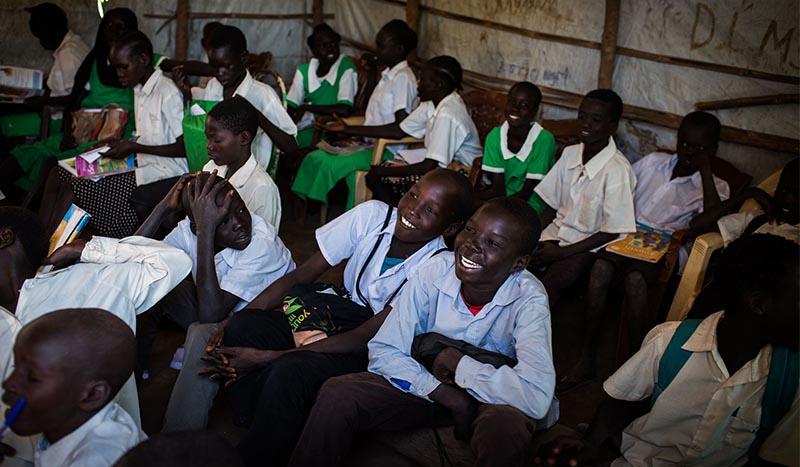 Here’s something to think about: More than half of the world’s refugees are children. Only half of refugee children are in primary school. Less than a quarter are estimated to be in secondary school. And only 1% are enrolled in any form of post-secondary education. There is a critical and urgent need to educate these children.

Without education, they will be doomed to poverty and exploitation. With education, they can take their places as contributing, self-reliant adults, and may be part of the rebuilding of their strife-torn countries.

Please help USA for UNHCR help kids like Yacob, Dictor, Guor, and Miakol and families like theirs all over the world. Your gift will change the lives of refugees wherever it is used. And it will open doors for kids who want and need a real chance to succeed.