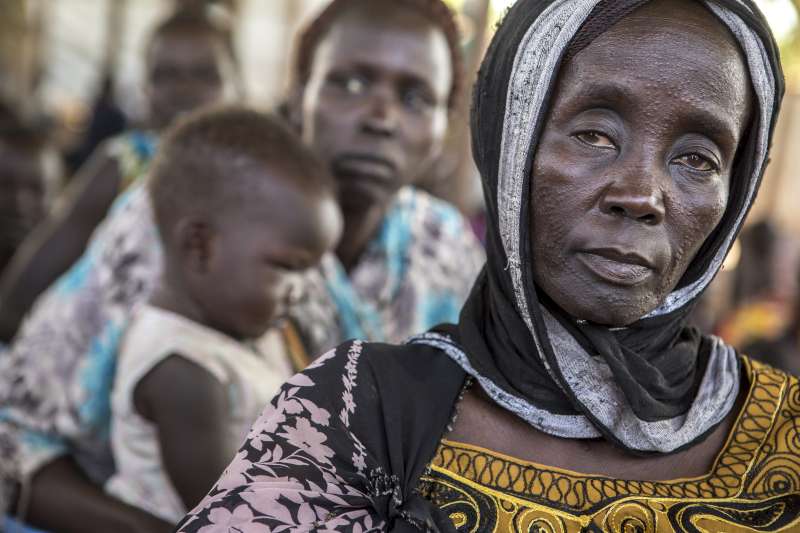 Nyakoch, a refugee from South Sudan is registered in Ethiopia's Kule camp. © UNHCR/P.Wiggers

GAMBELLA, Ethiopia, 14 July (UNHCR) – U.S. Assistant Secretary of State Anne Richard expressed shock at the number of South Sudanese refugees flowing into Ethiopia and said she had to persuade the U.S. public to increase their assistance.

Richard, the Assistant Secretary of State for the Bureau of Population, Refugees and Migration (BPRM), was visiting camps in western Ethiopia where 167,000 refugees have arrived since South Sudan descended into civil war last December.

"I am pleased and convinced that this is exactly how it should be done," Richard said after seeing the humanitarian operations at Pagak entry point, where about half the refugees arrived, as well as Kule 1 and Kule 2 camps.

"But we need to do more," she said. "I need to convince people in the United States that we have to invest more here, even as we cope with those other crises around the world."

Richard's visit came a day before UNHCR and its partners launched an appeal on Friday for $658 million to respond to the regional refugee crisis. Up to 715,000 South Sudan refugees are expected by the end of the year. The appeal was up from $371 million in March, when the refugee population was forecast to reach 340,000 – less than half the new figure.

The ongoing conflict and worsening humanitarian situation inside South Sudan is fueling a refugee exodus into Ethiopia, Kenya, Sudan and Uganda. Ethiopia has witnessed the biggest surge in arrivals.

The conflict is driving refugees into Ethiopia at the rate of 883 a day, nearly filling all three camps. UNHCR and its main government counterpart, the Administration for Refugee and Returnee Affairs (ARRA), are seeking a site in the flood-prone landscape to build an additional camp.

"The original planning figure (for Ethiopia) of 150,000 refugees up to the end of the year is being reached quickly," said Oscar Mundia, UNHCR's Senior Emergency Coordinator in Ethiopia. "UNHCR and its partners have now revised the planning figure upwards to 300,000."

The priorities of the revised response plan are life-saving aid in the forms of food, nutrition support, health, water and sanitation, hygiene, shelter assistance and protection. The large majority of refugee arrivals are women and children, who are particularly vulnerable.

Richard said she was worried about women, girls and children who have been abused on their way to exile. "It will really need experts here on the scene on a daily basis, to make sure the victims get what they need, but also to take preventive action."

The U.S. official, who was accompanied by US Ambassador to Ethiopia Patricia Haslach, was visibly shaken by what refugees described. A tearful Nyabiel Ran, 45, said her journey from Bentiu in Unity State took over two months: "In the end, I could arrive here with only two of my children and I don't know what may have happened to my husband and my other three children."

UNHCR's Acting Representative Bornwell Kantande praised the government's open-door policy towards refugees. In particular, he thanked Gatluak Tut Kot, president of the Gambella Peoples National Regional State, who joined the visit and announced his office was ready to provide a site for an additional camp.

Richard thanked the people and government of Ethiopia for their generosity to the refugees. In contrast, she challenged the warring leaders of South Sudan to visit Ethiopia to see what they have done to their people.