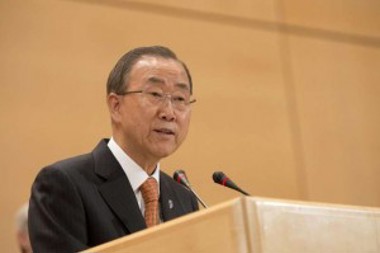 "Never before in United Nations history have we had so many refugees, displaced people and asylum-seekers. Never before has the United Nations been asked to reach so many with emergency food assistance and other life-saving support," he stressed.

October 1 (UNHCR) – UN Secretary-General Ban Ki-moon on Wednesday called on countries around the world to do more to prevent forced displacement, address its root causes and support solutions for those affected by it at a time of multiple crises.

He said the international community needed to pull together more than ever at a time when the world was facing so many challenges, particularly in the Middle East and Africa.

"Some of the challenges are on the front pages. Others are far from the headlines . . . In Iraq and Syria, we see new depths of barbarity with each passing day, and devastating spillover effects across the region," Ban Ki-moon said, while adding that in Africa more than 2 million people have been forced to leave their homes this year. This includes people fleeing from war and civil strife "from the Central African Republic to northern Nigeria ... from the Horn of Africa to the Sahel."

Ban Ki-moon, the first secretary-general to address ExCom in a decade, also said there was a need for an earlier and greater focus on human rights. "The human 'Rights Up Front' initiative that I launched last year aims to place human rights at the centre of our thinking and our efforts in the field," he said, while noting that UNHCR had been a supporter from the start.

The Secretary-General launched Rights Up Front last December to improve UN action to safeguard human rights around the world. "With its leadership on protection, UNHCR has provided important expertise in the context of humanitarian settings and ongoing conflict situations. With its culture of protection, UNHCR serves as a model for the wider system," he said.

He cited the protection of nearly 100,000 UN bases throughout South Sudan this year as "an early milestone of this new approach." The UN chief, alluding to UN action in Rwanda, said that "without that open gate policy, I'm afraid to tell you that thousands of people would have died."

He also spoke about the need to work together from an early stage to find lasting solutions for the forcibly displaced and said the needs and potential of displaced populations "must be reflected in national development plans and based on joint analysis."

Ban Ki-moon welcomed UNHCR's plans to launch a global campaign later this year to end statelessness by the year 2024, and he urged all member states of ExCom to support it. "The coming years must be a time for concrete action – for changing nationality laws, resolving the plight of stateless people and ensuring no child is born without citizenship," he stressed.

"Statelessness, like many other human rights violations, is often rooted in discriminatory beliefs and practices. Let us stand together against all forms of racism, xenophobia and manipulation that engender hatred, exclusion and discrimination. And let us speak up when people are stripped of their nationality," he added.

Statelessness is a massive problem that affects at least 10 million people worldwide. Those without a nationality often face difficulty participating in society and accessing a full range of human rights, including education, health care, travel and employment. Some may be detained because they are stateless.

On a more personal note, Ban Ki-moon recalled his own experience as a refugee during the 1950-1953 Korean War and said it explained his commitment to UNHCR and its work.

"One of my earliest memories is fleeing with my family into the hills surrounding my village. As we climbed in the rain and cold, I looked back on the only world I knew. Where I had played – where I had gone to school – where I had lived with my family – all of it was in flames. Our lives went up in smoke," he told ExCom.

But then the United Nations and the international community rushed to help. "They nourished us. They provided books and pens. They helped us rebuild and gave us the power to hope again."

The Secretary-General added that because of his own experience, whenever he visits refugees, "I carry a simple message: 'The world is with you – and I am with you. I know at least some measure of what you're going through – I lived it, too. And despite the hardships, despite the darkness, I came through. You will, too'" with the help of UNHCR and other humanitarian groups.

By Leo Dobbs in Geneva