GENEVA, June 28 (UNHCR) – The UN Refugee Agency and more than 40 other humanitarian aid organizations on Thursday appealed to donors for urgent new funds to help meet the needs of growing numbers of Syrian refugees in Jordan, Lebanon, Turkey and Iraq. 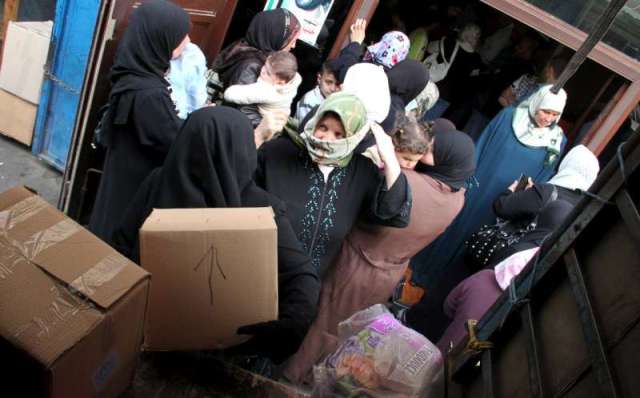 They had originally appealed in March for $84.1 million, but said increasing numbers of refugees meant $193 million would now be needed to help the almost 100,000 Syrian refugees. This figure is more than double the number in March and more people keep leaving their beleaguered country.

"The governments and host communities of Iraq, Jordan, Lebanon and Turkey have shown tremendous generosity and hospitality to Syrian refugees," said Panos Moumtzis, UNHCR's regional coordinator for Syrian refugees. "It is essential that the international community steps up its support for relief operations for refugees."

In the last three months, humanitarian agencies in neighbouring countries have been registering an average of more than 500 Syrian refugees a day. The updated appeal anticipates that by the end of 2012, there could be 185,000 refugees, due to new arrivals and existing refugees in neighboring countries requesting assistance or protection.

Moumtzis noted that around 75 percent of Syrian refugees were women and children. "Most are entirely dependent on life-saving humanitarian assistance," he stressed.

In Jordan and Lebanon, most refugees live among host communities, with a small number in Jordan living in transit facilities close to the border. In Turkey, Syrian refugees are hosted in camps provided by the government. In Iraq, the majority are living in the Kurdistan region, with increasing numbers moving to Domiz camp in the northern province of Dohuk.

The original appeal anticipated that only 1,500 Syrians would flee to Iraq. However, by mid-June, more than 6,000 Syrian refugees had been registered in northern Iraq. Meanwhile, increasing numbers are reported to have arrived in central and southern Iraq. In the past month the Kurdistan Regional Government made the decision that all Syrian refugees should be hosted in camps. Two thirds are awaiting relocation at Domiz camp.

Fior Iraq, the fresh appeal outlines shelter, registration, protection, food, water, sanitation, health and education support for refugees in camps as well as assistance for those remaining in urban areas.

In Lebanon, more than 29,000 Syrian refugees are being assisted. Many live with host families, who themselves struggle to make ends meet. Among the most pressing needs are permission to move freely, food and basic household items, shelter, medical care, education and psychosocial support.

In Turkey, 33,000 Syrian refugees are hosted in camps in the four border provinces of Hatay, Sanliurfa, Gaziantep and Kilis. New arrivals are rapidly settled in the camps prepared by the Turkish authorities and set up by the Turkish Red Crescent. Assistance to Syrian refugees in camps and technical advice to the government of Turkey is envisaged within the appeal. In addition, support for the increasing number of Iraqi and Somali refugees who have fled Syria for towns and cities in Turkey is planned.

The plan is a result of the coordinated efforts of 44 international and national agencies involved in responding to the needs of Syrian refugees in four countries, as well as support to host communities. This includes UNHCR, the International Organization for Migration (IOM), the UN Children's Fund (UNICEF), the World Health Organization (WHO) and the World Food Programme (WFP), as well as host governments and local and international NGOs.

UNHCR and partners continue to assist some 90,000 mainly Iraqi refugees in different parts of Syria.

Donate to the UN Refugee Agency today to help save the lives of refugees fleeing Syria!