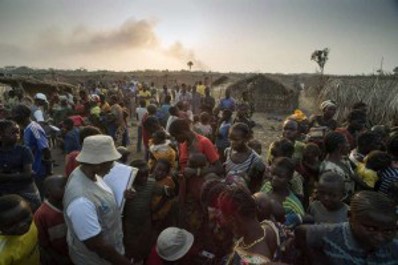 The UN refugee agency and its partners on Friday appealed for US$331 million to help almost half-a-million Central African Republic refugees struggling to survive in neighbouring countries.

The Regional Refugee Response Plan, presented by UNHCR and 18 partners, is aimed at providing safety, food, clean water, shelter, health and other basic services to some 460,000 refugees in Cameroon, Chad, the Democratic Republic of the Congo (DRC) and the Republic of the Congo.

Nearly 10 per cent of the Central African Republic's population of 4.5 million lives in exile. UNHCR fears that this number may be as high as 460,000 by the end of the year, or higher.

"UNHCR is extremely concerned that violence in the Central African Republic will continue and that the number of people forced to flee their homes will grow," spokesperson Karin de Gruijl told journalists in Geneva.

She noted that recent violence in Kouango district, some 300 kilometres away from Bangui, had sent thousands of refugees fleeing into the most remote areas of Bosobolo territory, located in northern Democratic Republic of the Congo's Equateur province.

"While we received reports of the arrival of 10,000 refugees since December, local government officials have registered up to 30,000. UNHCR and the Congolese National Commission for Refugees are currently on the ground to verify these numbers and register the new arrivals," de Gruijl said.

"Our teams are telling us that people continue to cross the Oubangui River on a daily basis. Refugees who manage to cross into the DRC are telling us stories of their villages being burnt, violence and murder. Some refugees arrive wounded including with bullet wounds," she added.

Most of the newly arrived refugees have settled on the banks of the Oubangui, some others live in makeshift shelters on the small islands in the river with limited access to health care and potable water.

De Gruijl said an emergency evaluation team, including several partners, had just returned from the area and "we are working on a plan to relocate the refugees away from the border, so that they are safer and can receive humanitarian assistance." During their mission, the evaluation team evacuated refugees with bullet wounds to the local hospital.

In 2014, UNHCR and partners appealed for US$210 million under the Central African Republic Regional Refugee Response Plan. That plan was funded at 57 per cent (US$120 million), allowing humanitarian agencies to provide only basic life-saving assistance to the refugees.