DOMIZ REFUGEE CAMP, Iraq, 30 August (UNHCR) – Amid a continuing exodus of Syrians into Iraq's Kurdistan region, the heads of the UN refugee agency and the World Food Program praised the regional government for giving refuge to almost 200,000 people, including some 47,000 who arrived in the last two weeks. 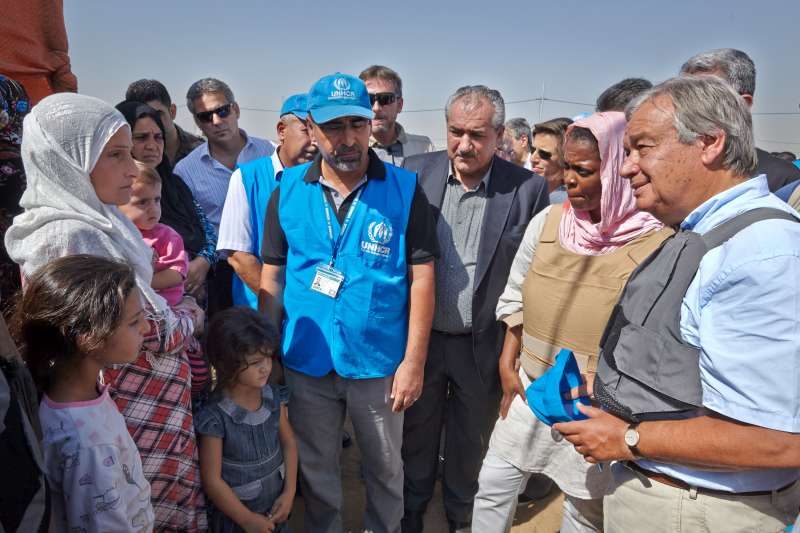 Despite the burden of accommodating such a large influx of refugees, the regional authorities have opened their border and offered land to accommodate the arriving Syrians in camps.

"This influx represents a huge strain on the economy and infrastructure here, and having a war next door is always a threat," UNHCR chief António Guterres said on Thursday at Domiz Refugee Camp, 43 miles from the border with Syria and home to 45,000 refugees.

"I express my deep gratitude to the government and the people of the Kurdistan region who have welcomed so many Syrians in need of protection."

Also addressing reporters following their visit to the camp, Executive Director of the World Food Program Ertharin Cousin said: "We are here for the people. We will be here for as long as the government of the Kurdistan region continues to support us and as long as the people of Syria need us."

The two officials later visited the Kawergost refugee camp near Erbil, an emergency site set up on a dusty plain to receive the thousands of Syrian refugees who suddenly began arriving two weeks ago. Over 1,200 Syrians streamed across the border on Thursday, arriving at the camp for registration.

Less than half the Syrian refugees live in camps, most preferring urban areas where they can seek work. Citing growing violence and instability compounded by a lack of services, the majority of the refugees fled from Hassake and Aleppo, with smaller numbers from Damascus and Raqqa.

"When a country is physically destroyed, its people dying and fleeing and a state and its services collapsing, the most important thing a neighbor can do is to keep the borders open. The Kurdistan region is an anchor of peace and stability in a very troubled part of the world," said Guterres. He joined Cousin in pledging to mobilize massive international support.

The two officials met the president of the Kurdistan region, Massoud Bazarni, who offered his commitment to continue welcoming Syrians fleeing to his region.

The governor of Erbil, Nawzad Hadi, spoke of the need for camps that can be expanded and equipped for growing numbers and changing weather. He warned: "Time is not our friend. We need to prepare for winter."

The minister of the interior, Karim Sinjari, who also visited the camp, declared his commitment to hosting refugees but noted that resources were stretched and hoped the international community would significantly step up support.

Beyond camp management, UNHCR registers refugees, which provides identification and assessment of individual needs so appropriate services can be provided. UNHCR also coordinates the response of specialized UN and NGO partners. All UNHCR work is done in close coordination with regional authorities.

WFP provides $31 per month for every family member in the form of food vouchers. "That translates into $10.5 million worth of business to local shops," Cousin said. "Through these vouchers, refugees are providing commerce to these communities while also having access to fresh and nutritious food."

Cousin noted that support from the international community is essential as needs continue to grow. WFP's program costs $30 million per week to feed Syrians in Syria and neighboring countries.

On Wednesday Guterres and Cousin traveled to Iraq's Anbar province and visited the border crossing to Syria. Although the border had been closed for over a year, they were encouraged that officials were considering allowing some vulnerable refugees to enter and establishing a family reunification program.

The UN chiefs noted the Iraqi government had expressed security fears, including the risk of infiltration. But they expressed concern for the people on the other side and hoped the right balance could be found to allow more vulnerable Syrians to enter.

Guterres called the Syria conflict the "worst threat to global peace and security since the last century. We are witnessing death and destruction, the collapse of the state and the enormous suffering of the people."

He noted that all relief agencies are dramatically underfunded at a time when millions of Syrians are in need of humanitarian assistance inside Syria and the number of refugees is fast approaching two million. But both UN officials declared their commitment to helping all Syrians in need.

"We have witnessed in more than two years many dramatic moments and we have always mobilized our resources to respond," Guterres said. "Our commitment is with the victims. Whatever happens, under whatever circumstances, we will be there to reach Syrians needing our assistance."