GENEVA, January 10 (UNHCR) – The UN refugee agency on Friday called on donors for $99 million to help the hundreds of thousands of people displaced by the worsening humanitarian crises in South Sudan and the Central African Republic. 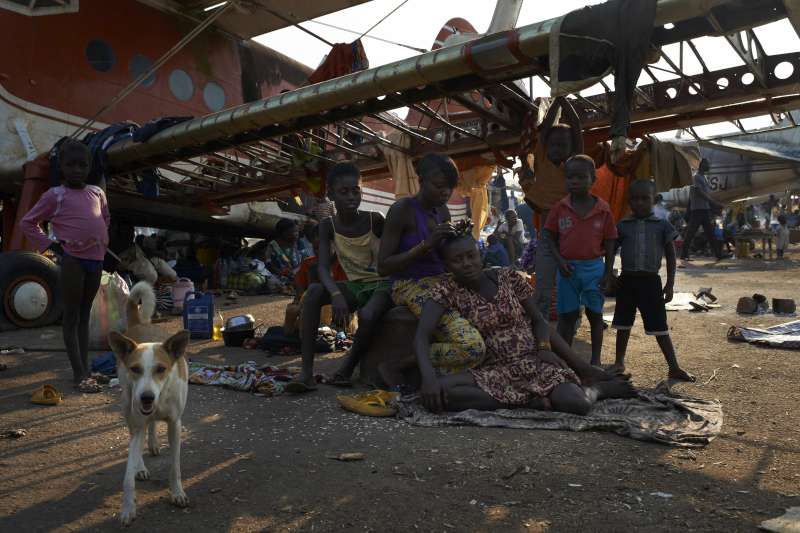 Displaced civilians of Bangui take shelter in the shell of an aircraft at the city's airport. UNHCR is seeking an extra US$40.2 million for its emergency operation in Central African Republic. © UNHCR/S.Phelps

The funding is needed to help people who have fled either country or sought shelter elsewhere within South Sudan or the Central African Republic (CAR).

The $99 million comprises $59 million for the South Sudan situation and $40.2 million for the Central African Republic crisis, both for the period running up to the end of March. It follows a joint appeal on December 31st by the UN Office for the Coordination of Humanitarian Affairs for $209 million for South Sudan and a 100-day plan for CAR covering $152.2 million in immediate support needs.

He said the situation has continued to deteriorate in South Sudan, where fighting has spread to seven of the country's 10 states. The number of South Sudanese fleeing to neighbouring countries has quickly increased, and now totals some 43,000 people. As of Wednesday, 32,443 South Sudanese had arrived in Uganda, 4,754 in Kenya's Kakuma Refugee Camp, some 6,000 in Ethiopia and at least several hundred in Sudan, with unconfirmed reports of thousands having fled there. Uganda is now seeing between 4,000 and 5,000 South Sudanese arriving every day.

Inside South Sudan some 232,000 people have been forced to flee their homes and are now displaced internally. This includes 60,500 people sheltering at 10 UN bases.

Edwards said UNHCR's appeal was based on existing numbers of forcibly displaced people and projections of additional displacement between now and April. "It anticipates that refugee numbers could rise to 125,000 and that the number of people displaced within South Sudan could reach 400,000," he noted.

"In the situations of both South Sudan and CAR, we are extremely concerned about the safety of refugees and displaced people, particularly with access being affected by the fighting and insecurity. In South Sudan for example, we continue to support an existing refugee population of more than 230,000 Sudanese in 10 camps," Edwards said in Geneva. "But the crises have displaced tens of thousands more people in both countries, and insecurity makes assisting them more expensive, having to resort to airlifts for example when roads are not safe," he added.

UNHCR emergency operations include registering, sheltering and protecting refugees. They include providing supplies to displaced people, designing and managing camps for them as well as protecting the most vulnerable among them.