UN High Commissioner for Refugees António Guterres has expressed his shock at the latest boat capsizing on the Mediterranean Sea, and the hundreds of lives reported to have been lost.

According to information from the Maltese authorities, only around 50 of the 700 reported to be aboard, had been rescued. Should these numbers be confirmed, the incident – which happened overnight Saturday-Sunday – will be the largest loss of life from any incident on the Mediterranean involving refugees and migrants. It follows an incident earlier this month which 400 lives were feared lost. The Lampedusa disaster of October 2013 saw almost 600 lives lost in two separate incidents. 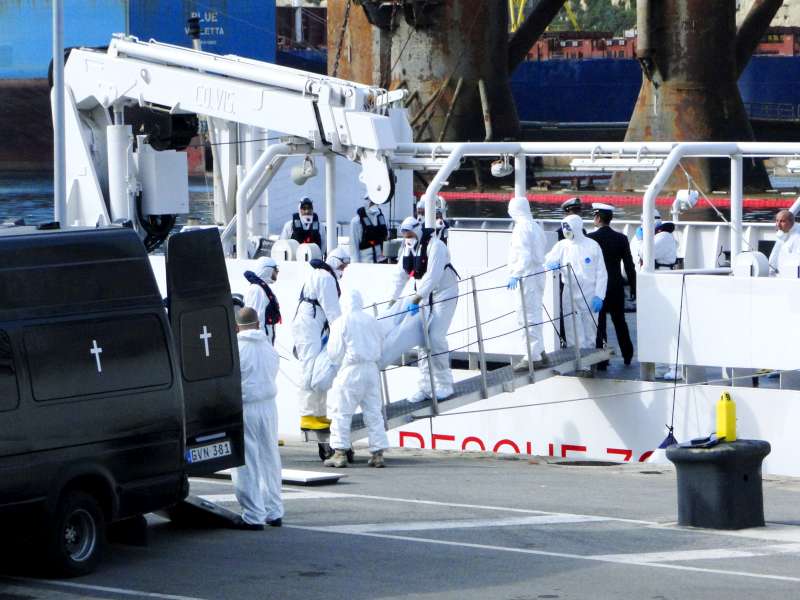 Maltese emergency workers in Senglea this morning collect bodies from the Mediterranean disaster at the weekend.

Available information is that the boat overturned shortly before midnight on Saturday, in Libyan waters, some 180 kilometres south of Italy's Lampedusa Island. Italian and Maltese naval vessels and merchant ships, along with several helicopters, have been engaged in the rescue operation being coordinated by the Italian authorities.

According to the latest reports, the survivors were being taken to Catania in eastern Sicily.

"This disaster confirms how urgent it is to restore a robust rescue-at-sea operation and establish credible legal avenues to reach Europe. Otherwise people seeking safety will continue to perish at sea," UNHCR's Guterres said in a message released in Geneva on Sunday.

"But it also points to the need for a comprehensive European approach to address the root causes that drive so many people to this tragic end. I hope the EU [European Union] will rise to the occasion, fully assuming a decisive role to prevent future such tragedies."

UNHCR has been advocating for an urgent response from the European Union to deal with the challenges faced by the thousands of people risking their lives to find safety in Europe. A comprehensive set of proposals has been shared by UNHCR, including a more robust search-and-rescue operation as well as credible legal avenue to reach safety – such as resettlement, humanitarian visas and enhanced family reunification.

EU foreign and interior ministers are reportedly due to meet in Luxembourg this week to discuss the deaths at sea. So far this year, more than 36,000 refugees and migrants have arrived by boat in southern Europe and – if today's toll is confirmed – over 1,600 have died. In 2014, around 219,000 people crossed the Mediterranean, and 3,500 lives were lost.