Americas must keep children on the run safe from violence 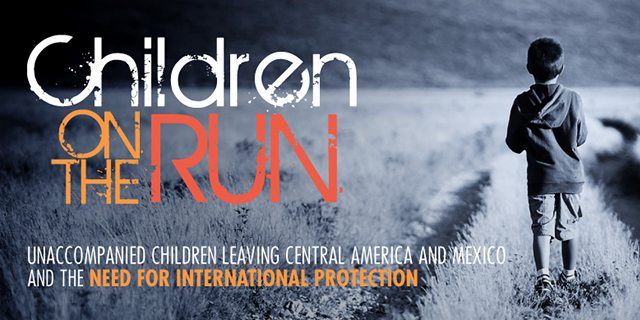 The cover of the report, which was launched today in Washington, DC. © UNHCR

WASHINGTON, DC, United States, March 12 (UNHCR) – The UN refugee agency, in a report released on Wednesday, said it was concerned at the increasing numbers of children in the Americas forced from their homes and families, propelled by violence, insecurity and abuse in their communities and at home.

"Children on the Run," which was launched in Washington, DC, also calls on governments to take action to keep children safe from human rights abuses, violence and crime, and to ensure their access to asylum and other forms of international protection.

"With violence and insecurity permeating the Americas region, we found a strong link between this unabated situation, new displacement patterns and the children's reasons for leaving their homes and families to flee northward. They escaped armed actors, generalized and targeted violence in their communities and abuse in their homes," said Shelly Pitterman, UNHCR regional representative in the United States.

The report analyzes the humanitarian impact this insecurity has had on children, forcing them across international borders to seek safety on their own. Based on a 2013 study funded by the John D. and Catherine T. MacArthur Foundation, "Children on the Run" unveils the humanitarian impact of the situation through interviews with more than 400 unaccompanied children from El Salvador, Guatemala, Honduras and Mexico held in US federal custody.

It shows that the large majority of these children believed they would remain unsafe in their home countries and, as a result, should generally be screened for international protection needs by authorities along the way.

A 14-year-old girl from El Salvador cited in the report, stated: "There are problems in my country. The biggest problem is the gangs. They go into the school and take girls out and kill them . . . I used to see reports on the TV every day about girls being buried in their uniforms with their backpacks and notebooks. I had to go very far to go to school, and I had to walk by myself. There was nowhere else I could go where it would be safer. I lived in a village, and it was even worse in cities."

The number of children making the perilous journey alone and unaccompanied has doubled each year since 2010. The US government estimated, and is on track to reach, 60,000 children reaching United States territory this year in search of safe haven.

Although the US receives the majority of new asylum claims by both children and adults from El Salvador, Guatemala and Honduras, it is not alone. Mexico, Panama, Nicaragua, Costa Rica and Belize, combined, have also documented a 432 per cent increase in the number of asylum applications from citizens of these three countries since 2009.

Globally, the protection of children is a core priority for UNHCR. The international community has long recognized both the right of children to seek asylum and their inherent vulnerability. Children also face specific forms of persecution that may give rise to a claim for refugee status.

"The United States, other governments in the Americas, and UNHCR, can work together to ensure these children are carefully screened and provided the protection they so desperately need and deserve. All girls and boys must be safeguarded from any form of violence, abuse, neglect and exploitation," Pitterman said.

The report was scheduled to be discussed by a panel later Wednesday at the Migration Policy Institute in Washington, DC, with introductory remarks by High Commissioner for Refugees António Guterres. The report is released in the context of the 30th anniversary of the 1984 Cartagena Declaration on Refugees, "Cartagena +30."

This is an opportunity for UNHCR and the regional governments to reflect on the protection challenges facing the hemisphere, the gaps that might exist in the current international protection regime, and how to address them in a pragmatic and innovative way.