ARSAL, Lebanon, December 2 (UNHCR) – The rugged hillside town of Arsal in Lebanon's Bekaa Valley is home to about 18,000 people – in peaceful times. 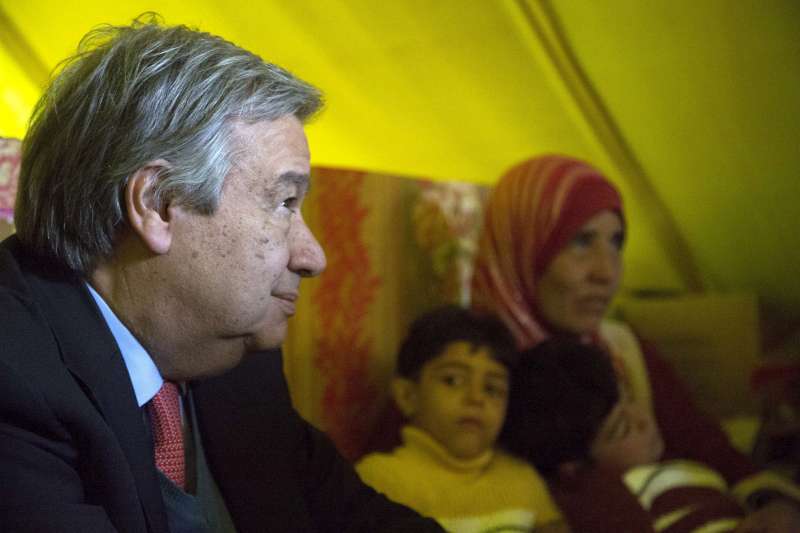 High Commissioner António Guterres listens to a Syrian family that found refuge at the transit center in Arsal, Lebanon © UNHCR/M.Hofer

Since November 15, this population has more than doubled as refugees fleeing violence in the western Syria region of Qalamoun continue to stream across the border, located just 10 miles from Arsal. Syrians now outnumber Lebanese in the town.

Last Friday, UN High Commissioner for Refugees António Guterres visited Arsal to meet the latest group to flee Syria's 31-month civil war and to thank local leaders and humanitarian agencies for helping the new arrivals. He drew attention to the urgent need to support Syrian children affected by the violence. His visit to the region coincided with the release of a major new report from UNHCR detailing the costs of the war on Syria's next generation.

During his visit, Guterres praised Lebanon for its "massive generosity" in playing host to more than 800,000 refugees, and urged donor nations to match that generosity with financial assistance to Lebanon and to refugees. He asked for a greater readiness to accept Syrian refugees who want to be resettled in third countries.

"The global response [to the Syrian crisis] has been huge," he said. "But it is out of proportion to the needs."

The burden that countries like Lebanon and Jordan are being forced to shoulder has to be shared by the whole international community, he said, if those countries are to be expected to keep their borders open and welcome survivors of the conflict in the future.

"Let's be honest. We're not doing enough," said Guterres. "Here in Arsal, we are seeing an emergency within an emergency. We're in a town that has more Syrians than Lebanese. Beyond that there is a gap of human capacity, clinics, schools that are not there."

He made the comments while visiting a new transit center of green canvas UNHCR tents set up in the past week as part of what has become the largest UNHCR operation in the world.

Guterres called for renewed attention to the plight of Syrian children, as detailed in a major new report released Friday and entitled: "The Future of Syria: Refugee Children in Crisis."

The report documents how child survivors of the war are suffering from profound psychological distress, loneliness and trauma as a result of their experiences. Only one third of children are in school. More than 1.1 million children are now refugees.

"The numbers are appalling," said Guterres. "But what is really important is the life of each child: We must have massive support if we're to avoid another lost generation."