GENEVA, April 18 (UNHCR) – UN High Commissioner for Refugees Antonio Guterres, warned the Untied Nations Security Council today that without an end to the fighting soon, almost half of Syria's 20.8 million people could be in need of humanitarian help by the end of this year. 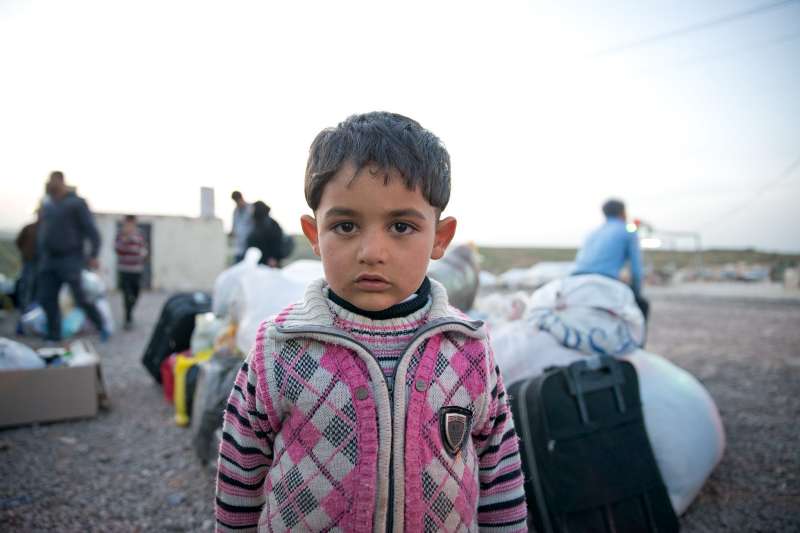 A young Syrian refugee at a reception center after crossing into Jordan with his family. Kuwait's donations to UNHCR and other UN agencies will provide vital help to the displaced and needy. ©UNHCR/J.Kohler

In an address to the Council by video-link from Geneva, Guterres said 400,000 refugees had fled Syria in the last seven weeks, bringing the population of Syrians registered as refugees or waiting to be registered to 1,367,413. If current trends continue, he said, then by the end of the year there may be up to 3.5 million Syrians refugees, together with 6.5 million people inside Syria who may be in need of help.

"These figures are terrifying," he said. "This is not just frightening, it risks becoming simply unsustainable. There is no way to adequately respond to the enormous humanitarian needs these figures represent. And it is difficult to imagine how a nation can endure so much suffering.

"I know that, as High Commissioner for Refugees, I should confine my remarks to the scope of my mandate," he added. "But as a citizen of the world, I cannot refrain from asking: Isn't there any way to stop this fighting, to open the door for a political solution?"

Guterres told the Security Council that humanitarian funding needs had become so urgent that governments would need to look at extraordinary funding mechanisms to avoid the international response capacity becoming overwhelmed. He also warned of the growing pressure the refugee crisis is exerting on countries in the region.

"The first step necessary… is for the international community to provide massive support to the two countries that are most dramatically impacted by the Syrian conflict and the refugee outflow it has caused – Jordan and Lebanon," he said, while also noting the huge impact the crisis is having on Turkey, which has provided more than US$750 million in direct assistance to over 300,000 Syrian refugees.

"Helping Syria's neighbours deal with the human fallout of this terrible conflict is crucial for preserving the stability of the entire region. This is not just another refugee crisis – what happens in Syria and in the neighbouring countries potentially has much wider, even global, implications."

Earlier on Thursday, Kuwait became the latest country to donate, providing UNHCR with $110 million for its Syria operations as part of a $275 million package of funding for UN agencies. Kuwait's donation is the largest the agency has ever received from a Gulf country and means that UNHCR has now received over 50% of the funds it has requested for Syrian refugees and displaced during the first half of 2013.