GENEVA, July 20 (UNHCR) – UN High Commissioner for Refugees António Guterres today expressed his growing concern for the dramatic numbers of people who are fleeing their homes in Syria. "With the spread of deadly violence, I am gravely concerned for the thousands of Syrian civilians and refugees who have been forced to flee," said Guterres, who also expressed concern about tens of thousands of Iraqi refugees in the Syrian capital, Damascus. 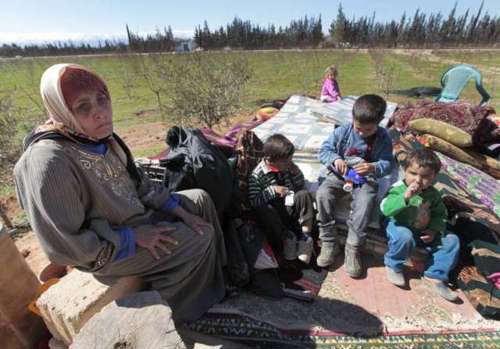 A Syrian woman arrives with her family at the Lebanese border after fleeing their home near Homs.© AP Photo/Hussein Malla

Thousands of Syrians crossed into Lebanon on Thursday. Reports vary between 8,500 and 30,000 people having crossed in the past 48 hours. In consultation with government authorities, UNHCR and its partners are now in the field verifying numbers and assessing the profile and needs of newly arrived Syrians, with a particular focus on vulnerable people who may need immediate assistance.

With the rapidly evolving situation, it is not possible to give a precise number for those displaced in Syria. "As of last week, it was estimated that 1 million people may have been forced to flee inside the country since the conflict began [in March last year]," UNHCR spokesperson Melissa Fleming told journalists in Geneva. "Many Syrians in general are running low on resources and are increasingly turning to the Syrian Arab Red Crescent (SARC) and other organizations for help.

"Thousands of mainly Iraqi refugees living in the Damascus suburb of Seida Zeinab have fled their homes due to violence and targeted threats in recent days. At least 2,000 have taken shelter in schools and parks in Jaramana district. Many Syrians have also moved there.

"I fear for the civilians caught up in the violence in Damascus, including the large Iraqi refugee population residing there," said the High Commissioner. According to reports received by UNHCR, last week an Iraqi refugee family of seven were found dead in their apartment in Damascus, while three other refugees were killed by gunfire.

"Despite the security challenges, UNHCR staff continue to man hotlines and the Damascus, Aleppo and Al Hassekeh offices remain open. Hundreds of frightened refugees have called the hotline and outreach volunteers in the past 24 hours, reporting direct threats and fears of being caught up in the fighting," UNHCR's Fleming said.

In the past two days, UNHCR has distributed urgent grants to refugees who needed cash to rent apartments and to buy basic household items where possible. On Thursday, two truckloads of assistance were distributed by SARC volunteers in Damascus to Syrians and refugees, with more distributions planned in the coming days.

UNHCR Syria has more than 250 national and international staff, operating from offices in Damascus, Aleppo and al Hassakeh. There are over 88,000 registered Iraqi refugees, the majority of whom reside in Damascus, along with some 8,000 refugees from other countries. Over 13,000 Iraqis left Syria in the first half of 2012, mostly for home.

Meanwhile, UNHCR will extend the delivery of assistance to 175,000 Syrians from the current 125,000. To date, the majority of UNHCR's assistance has been delivered by SARC volunteers to vulnerable Syrians in Damascus, Aleppo and al Hassakeh. UNHCR is also launching a project of one-time cash assistance for 25,000 Syrian families.

UNHCR and SARC have a network of 15 warehouses in country which are stocked to ensure the rapid availability of aid. UNHCR plans to expand this network further in the coming weeks.

Meanwhile, UNHCR's Fleming said that according to the refugee agency's registration statistics, "On 18 July, 120,000 Syrian refugees sought protection in Jordan, Lebanon, Iraq and Turkey." She added that government estimates put the numbers much higher.

Guterres had praise for the humanitarian stand of the neighboring countries. "I am extremely grateful Jordan, Lebanon, Iraq and Turkey have maintained open borders," he said.

Many newly arriving Syrian refugees are entirely dependent on humanitarian aid, with some coming with only the clothes on their backs and few or no financial resources, following many months of unemployment. The needs of those who arrived earlier in the year are also increasing as their savings have become depleted.

At the same time, the communities supporting the refugees are increasingly feeling the strain, with the local infrastructure and resources under severe pressure, in particular water, housing, capacity of schools and health facilities.

Two weeks after the launch of the Revised Regional Response Plan for Syrian Refugees, which encompasses the needs of seven UN agencies and 36 NGO partners, the $192 million appeal is only 26 percent funded. The Syria Humanitarian Assistance Response Plan, an inter-agency appeal led by the UN Office for Humanitarian Coordination (OCHA) to support affected Syrians inside their country, has only received $38 million of the $180 million needed.

By Sybella Wilkes in Geneva

Donate to the UN Refugee Agency today to help refugees from Syria being forced to flee!