DAKAR, Senegal, July 23 (UNHCR) – With the first round of Mali's presidential elections scheduled for Sunday, UNHCR is continuing preparations with the Malian authorities and neighboring states for out-of-country voting for refugees. Burkina Faso, Mauritania and Niger host some 173,000 Malian refugees who fled their country when conflict erupted in January 2012. 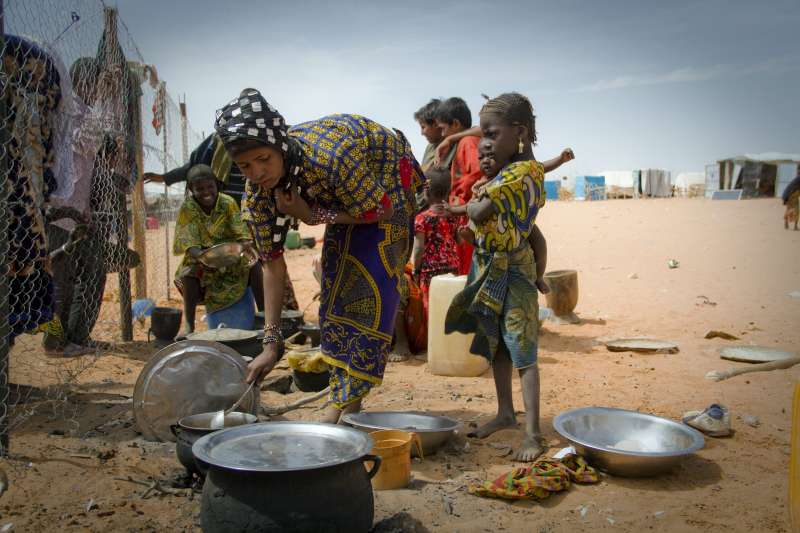 Malian refugees in Mauritania. UNHCR is trying to ensure that eligible refugees can vote in the Mali election at the weekend.© UNHCR/B.Malum

UNHCR's role in the elections is to facilitate their participation and ensure the voluntary nature of the electoral process in a safe environment. "Our role is humanitarian and non-political only," UNHCR spokesman Adrian Edwards stressed, adding that the refugee agency in June conducted formal and informal surveys in major refugee areas through discussion groups.

"The surveys found that refugees were generally in favour of being included in the elections, that they have good awareness of the situation in Mali, and that some believe the elections will help peace and stability – a fundamental condition for many refugees in deciding whether to return to their country," he said.

UNHCR teams in Burkina Faso, Niger, and Mauritania have been meeting with refugee communities to clearly explain the agency's role in facilitating participation and respecting neutrality. The agency has helped transport some election-related materials. However, transportation of sensitive materials, such as voters' cards or ballots papers, will be the responsibility of the Malian electoral authorities and the countries of asylum.

Malian authorities visited refugee camps and other sites in Burkina Faso, Mauritania and Niger in June to establish willingness to vote. In total 19,020 refugees have voluntarily registered to take part, out of 73,277 refugees of voting age (18 and above). Names were then verified against the biometric civil registry, which was last updated in 2011 and used to establish the electoral lists.

As concerning, are reports that only a few NINA (national identification number) voting cards have so far been provided by Malian authorities to refugees in Burkina Faso, Mauritania and Niger. In Burkina Faso, for instance, only 38 NINA cards have at this point reached the Malian representation. The delay in the issuance and distribution of NINA cards is not specific to refugees but is also impacting many Malian citizens within Mali as well as abroad.

"It is important that the Malian authorities quickly make public the voters' lists and speed distribution of the electoral cards in Burkina Faso, Niger and Mauritania. This is especially important as refugee camps and sites are located in remote areas, where access may become difficult with the rainy season now settling in. The Malian authorities have informed us that they are considering alternatives to allow refugees to vote in case of further delays.

More than 173,500 Malians have found refuge in neighboring countries since the beginning of the conflict in January 2012, including 49,975 in Burkina Faso, 48,710 in Niger, 74,907 in Mauritania and 1,500 in Algeria. About 353,000 persons are also internally displaced, according to the Commission de Mouvement de Population in Mali.

By Hélène Caux in Dakar, Senegal