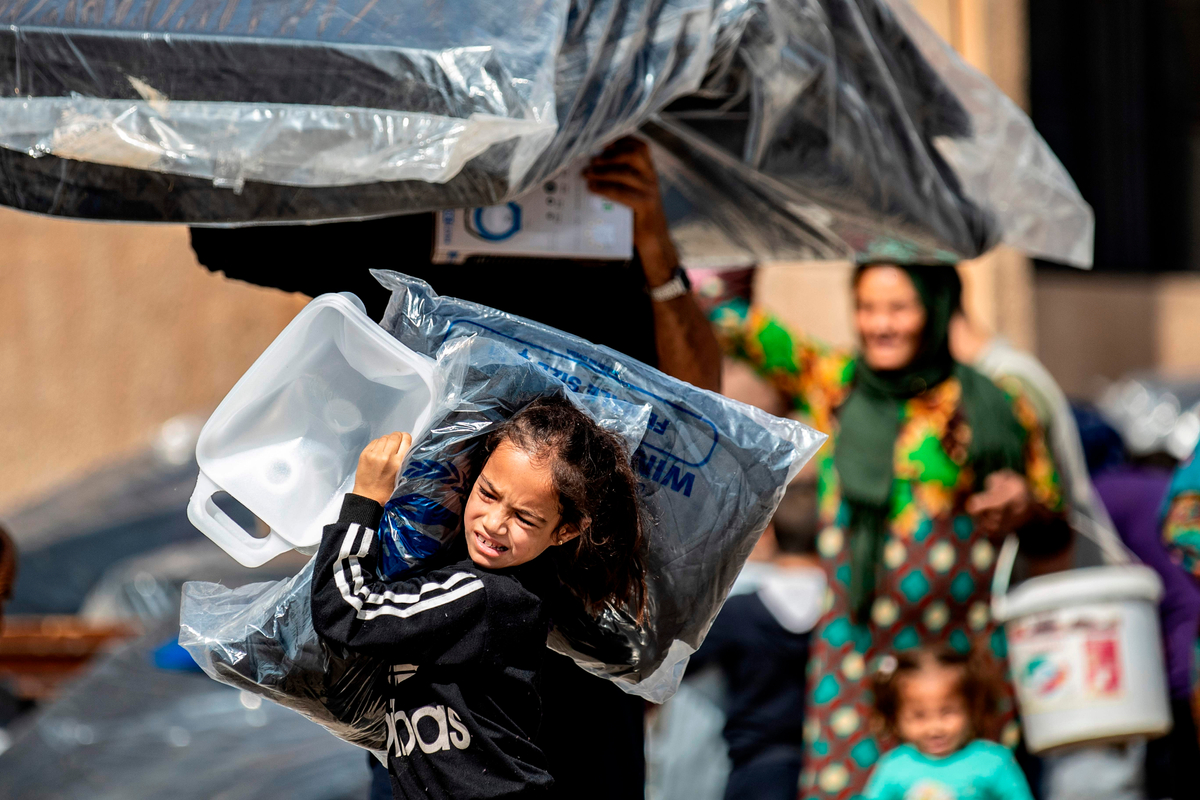 Since the escalation of violence in north-east Syria last week, teams from UNHCR, the UN Refugee Agency, have assisted some 31,800 people.

In Al-Hassakeh and Tal Tamer, UNHCR has distributed blankets and other core relief items to some 20,250 people in three camps for internally displaced people (IDPs) and to another 11,550 people living in communal shelters.

UNHCR has also sent additional aid, including blankets for 52,000 people, plastic sheeting for 15,000 people and solar lamps for 20,000 people to Qamishli.

We continue to conduct through our protection partners assessments in communal shelters in Al-Hassakeh, Tal Tamer and Ar-Raqqa. Many newly displaced families have reportedly settled within the host communities and their needs are also being assessed.

Among the immediate protection needs which have been identified are the lack of civil documentation, as people left their homes without papers and other belongings. Families have also been separated.

Some people are in need of psychological first aid and psychosocial support. UNHCR mobilized protection teams to identify critical protection needs of the most vulnerable, including people with specific needs, elderly people and those with disabilities and serious medical conditions.

Following the reported departure of camp administration/management from Ain Issa camp, located approximately some 28 miles south of the border town of Tell Abiad, UNHCR mobilized outreach volunteers and community leaders to arrange the return of identification documents to camp residents who were without papers. As of today, humanitarian workers are unable to safely access the camp to provide critical life-saving assistance. Basic services, including food and water, are no longer being provided.

UNHCR estimates its initial additional funding needs inside Syria at US$31.5 million within the existing appeal for Syria (HRP). This is provisional given the fast-evolving developments on the ground.

Amid the continued fighting, some 184 people crossed from north-east Syria into neighboring Iraq on Monday, with a further 277 arriving overnight into Tuesday. Many of the refugees had fled their homes in the Kobani area, some of them walking for three or four days to reach safety.

UNHCR and its partners with the local authorities transported the group to Domiz reception center in Dohuk where they were given hot meals, water, shelter, blankets and other essential items, as well as medical attention.

Their needs are currently being assessed by the local authorities and UNHCR.

One man our colleagues spoke to, who had arrived with his wife and six children, said the journey had been very difficult but they had fled in fear of their lives as shells fell near their home. He said he had seen people fleeing in all directions, including towards the Iraqi border.

It is estimated that another 2,000 people who have fled the latest fighting in north-east Syria are currently close to the Syria-Iraq border.