Refugees' health of major concern after flooding in South Sudan 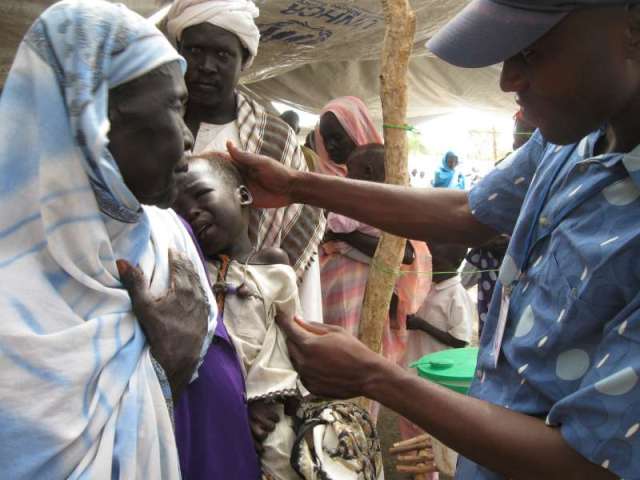 "We are watching closely for possible outbreaks of disease," UNHCR spokesman, Adrian Edwards, said, while noting that health organizations and UNHCR are undertaking a mass health screening to obtain better data on mortality rates and vaccination coverage rates across all refugee sites in South Sudan's Upper Nile and Unity states.

In light of the weak state of the population on arrival, large-scale programs are required to immediately address their needs and prevent people's health from deteriorating further.

"In remote places, such as the borders of Unity and Upper Nile states, the challenge for us is equalled by very few other situations in the world. Massive health outreach and intensive hygiene and sanitation programs are needed to mitigate the threats to the health of refugees," Edwards said.

In Yida settlement, Unity state, close to the border with Sudan's Southern Kordofan state, new arrivals have doubled the refugee population since early May to close to 60,000 people.

And while UNHCR is conducting verification of numbers in Yida, congestion in a limited strip of land already cut-off by rains creates a further health challenge. Last week saw a sharp increase of diarrhea cases was reported by medics working there. To address this and secure clean and sufficient drinking water, more wells are being drilled.

UNHCR is also distributing this week thousands of jerry cans and buckets to all families with children aged under five. Additional chlorine is being used to treat water. Efforts are also under way to increase awareness among the mostly young refugee population about hygiene, health and nutrition risks.

"The most critical challenge for us and all partners working there is to provide enough clean water for all refugees and prevent diseases in this remote and fragile part of South Sudan," UNHCR's Edwards said. He specifically mentioned Upper Nile state's Maban County, which now hosts more than 110,000 refugees from Blue Nile state in Sudan.

Aid agencies have made progress by drilling for water or trucking it in to refugee sites. Four drilling rigs are operational while most of the refugee population at Maban's Jammam site is being relocated to other sites because of clean water shortages there combined with localized flooding.

Meanwhile, due to torrential rains and flooding, the few roads are largely impassable, slowing the delivery of assistance. Using helicopters to move life-saving drilling equipment to areas in need is being considered, but a lack of funds is hampering this effort.

UNHCR's revised appeal for Sudanese refugees in Ethiopia and South Sudan amounts to $220 million. By the beginning of July, the UN Refugee Agency had received $45.9 million ($11.6 million for Ethiopia and $33.6 million for South Sudan), representing less than 21 percent of estimated needs.