UNHCR ready to send aid to 65,000 people inside Syria during ceasefire

GENEVA, October 25 (UNHCR) –The UN refugee agency and its partners are ready to send thousands of pre-positioned emergency aid packages to families in previously inaccessible areas of Syria if a proposed four-day ceasefire over this weekend's Eid Al Adha holiday takes hold. 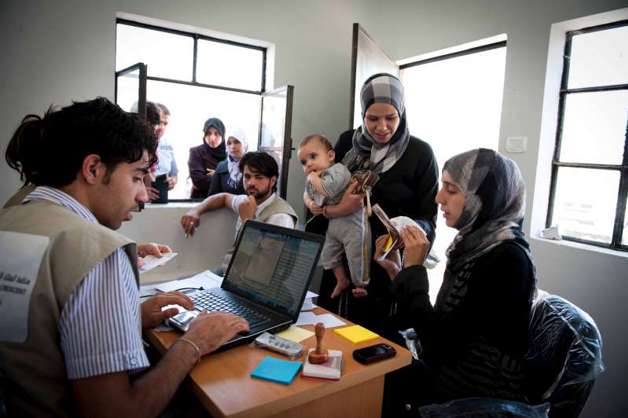 UNHCR hopes to distribute relief items at aid distribution centers like this one in previously inaccessible areas of Syria if a proposed ceasefire holds over Eid. © UNHCR/B.Diab

In all, some 550 tons of supplies are being made available for distribution to up to 13,000 affected families – some 65,000 people – in several previously inaccessible areas.

Five thousand UNHCR emergency family kits have already been pre-positioned in the north-western city of Aleppo, with another 5,000 on the way. UNHCR's Damascus office also hopes to rush nearly 2,000 of the family emergency kits to the eastern city of Homs today.

Another 1,000 kits are to be sent Friday and Saturday from UNHCR's office in the north-eastern city of Hassakeh to the neighboring governorate of Al Raqqa for distribution, while a smaller number – 140 kits – will be made available in areas south of Hassakeh.

"We and our partners want to be in a position to move quickly if security allows over the next few days," said UNHCR Syria Representative Tarik Kurdi in Damascus. "There are areas around Aleppo, Idlib, Al Raqqa and Homs we've been unable to reach with humanitarian aid for some time. If there is a window of opportunity here, we will be ready to move."

The ceasefire was called for by the United Nations and League of Arab States' joint special representative on the Syria crisis, Lakhdar Brahimi.

UNHCR is working closely with the Syrian Arab Red Crescent and other partners to provide aid. Each 42-kilogram emergency family kit contains four mattresses, six blankets, one jerry can, a kitchen set, plastic sheeting and a family hygiene kit, including sanitary napkins, soap and other items.

The UN refugee agency is part of the joint UN humanitarian response in Syria, where there are at least 1.2 million people in need. The refugee agency has more than 350 staff in three offices across Syria.

It is currently at the half-way point in a large-scale operation to distribute non-food aid packages to 100,000 Syrian families (500,000 people) by the end of this year. It is also carrying out an emergency cash assistance program for displaced people, providing emergency funds for vulnerable families so they can pay rent or meet other critical needs not covered by the aid package program.

So far, nearly 9,000 families have benefitted from the cash assistance program in Al Nabek (south of Homs) and in Hassekeh.