This is a summary of what was said by UNHCR’s Director for Asia & the Pacific Indrika Ratwatte – to whom quoted text may be attributed – at today’s press briefing at the Palais des Nations in Geneva. 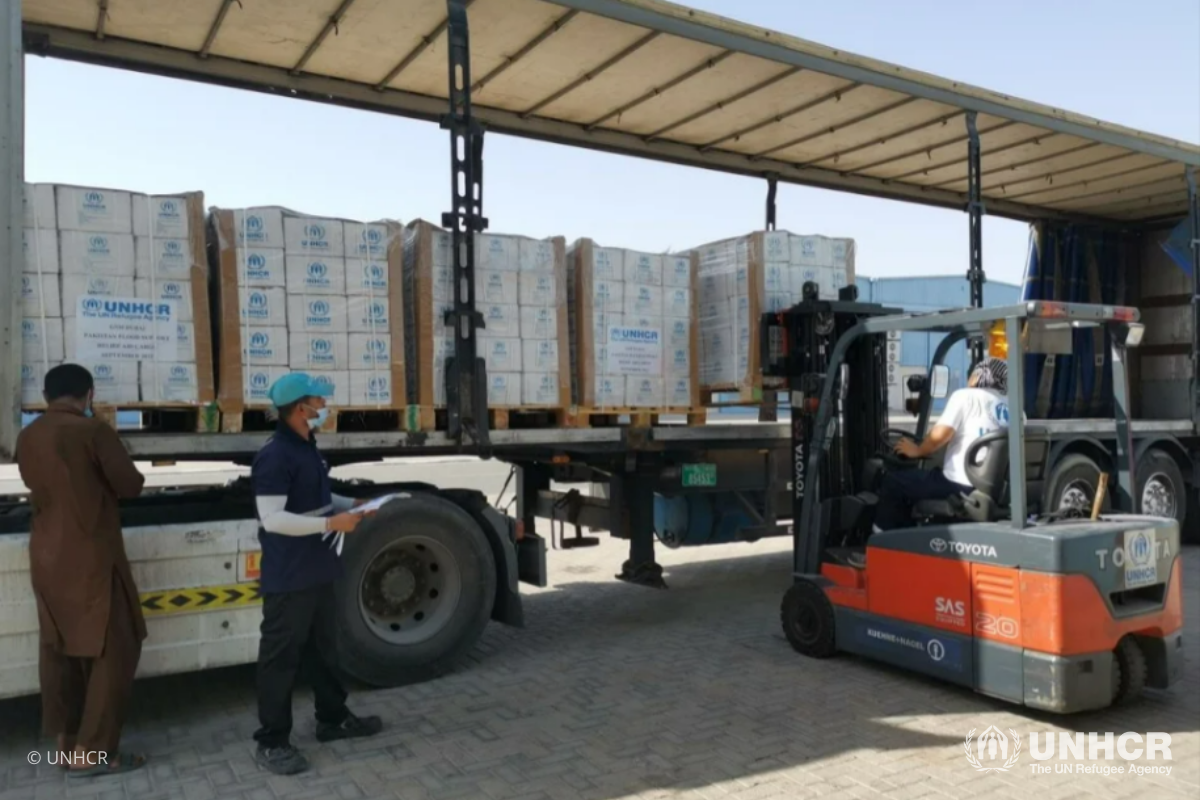 GENEVA – UNHCR, the UN Refugee Agency, is scaling up support in Pakistan, where torrential monsoon rains and floods have now affected more than 33 million people, causing widespread destruction and damage and over 1,200 fatalities.

Starting yesterday, UNHCR has mounted a huge airlift operation from Dubai – meant to focus on the worst affected areas of southern Sindh province, where Larkana and Sukkur are the most impacted cities in the country with limited assistance for those displaced from their homes, who require various essential supplies.

The first three of nine scheduled flights arrived on Monday in Pakistan – with the other five on their way. Aid includes 40,000 sleeping mats, nearly 15,000 kitchen sets and some 5,000 multi-purpose tarpaulins.

An additional six flights are also scheduled from Dubai for Wednesday and Thursday, with 4,500 sleeping mats, 400 tarpaulins, and nearly 5,000 kitchen sets.

UNHCR trucks carrying tents for some 11,000 families are also on the road from Uzbekistan, with more convoys scheduled.

As part of the UN-wide system efforts, UNHCR is supporting the government-led response, providing assistance to the worst flood-hit areas for an initial 50,000 households.

People are facing many challenges in the informal settlements, camped along roadsides to escape surrounding flood waters, setting up shelters with whatever resources they have. Most want to stay close to home, hoping to go back soon. The authorities need much more support with shelter, relief supplies and technical expertise. UNHCR and partners are helping authorities to conduct rapid humanitarian needs assessments.

We fear the situation could deteriorate – the latest Pakistan Meteorological Department forecasts predict more rains for the coming month. This will increase challenges for flood survivors, and likely worsen conditions for nearly half a million displaced people, forcing more to abandon their homes.

We are dispatching all our existing humanitarian stocks in the country for Pakistani communities and refugees, particularly in Sindh, Balochistan and Khyber Pakhtunkwa, some of the most heavily affected provinces, where more than 420,000 Afghan refugees live alongside generous host communities.

Pakistan and its people have hosted millions of Afghan refugees for over four decades, with some 1.3 million currently registered in the country. UNHCR is standing in solidarity with the country and its people – as we did during the devastating 2005 earthquake and 2010 floods.

But the scale of the devastation requires urgent international support. The impact of the global climate crisis on countries like Pakistan must be shared by the international community. Much more will be needed to help Pakistan to overcome this catastrophe and rebuild when the waters subside.

In the region, we are also alarmed by the situation in neighboring Afghanistan. Several provinces across the eastern, central, southern and western regions have been hit by heavy rains. This follows the devastating earthquake in June that hit Paktika and Khost provinces in the southeast.

In response to both disasters, UNHCR has been supporting affected communities with emergency assistance. More is planned in the coming weeks, though access has remained challenging in the areas hit by rains.

UNHCR has also supported some of the worst earthquake-affected households in 35 villages, particularly in refugee-hosting regions. Work continues to complete 2,300 earthquake-resilient winterized houses including stoves, solar panels and latrines.

The humanitarian situation across the country remains very difficult, particularly as another harsh winter season approaches. More than 24 million people – over half the population – need assistance.  Some 3.4 million people remain displaced, most living in difficult, makeshift conditions.

We expect more to return in the coming months. A recent UNHCR survey found that over 40 percent of IDPs want to do so as soon possible. UNHCR is supporting their wish to return and sustainably reintegrate. We plan to reach 620,000 returnees this year with assistance and reintegration support.

In areas of return, some 2.6 million Afghans are also receiving support from UNHCR protection activities and investments in infrastructure projects such as schools, health centers, water distribution systems and road building.

Support for the humanitarian response needs to be sustained to avoid further misery in a country that has seen four decades of turmoil.

Both the inter-agency Regional Refugee Response Plan (RRP) and the Afghanistan Humanitarian Plan (HRP) remain significantly underfunded. The HRP for US$4.4 billion is 43 percent funded, and the RRP of US$623 million is only 40 percent funded.