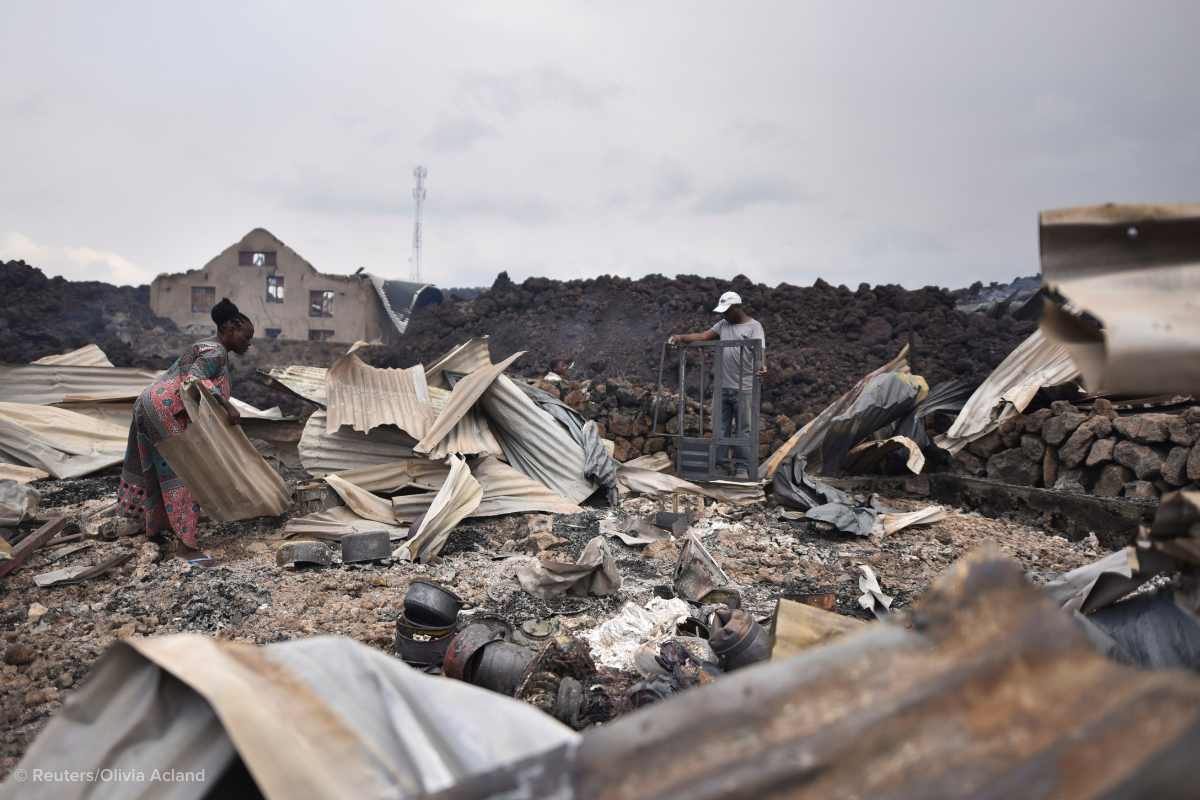 Following the eruption of the Mount Nyiragongo volcano in the Democratic Republic of the Congo (DRC) on 22 May, UNHCR, the UN Refugee Agency, is assessing the needs of affected communities in the city of Goma.

Thousands of people fled their homes on foot on Saturday night, carrying mattresses and other belongings as lava flowed towards Goma, burning down villages on the way. Many of them were welcomed by host families in Goma and surrounding areas, while several thousand fled across the border into Rwanda.

According to authorities, 32 people died in incidents linked to the eruption, including seven people killed by lava and five asphyxiated by gases.

Led by the Red Cross, a significant effort is underway to reunite several hundred children who were separated from their families as they fled.

The lava flow stopped on Sunday, but there have been repeated earthquakes since the eruption and the lava lake in the volcano’s crater appears to have refilled, prompting fears of new fissures opening or another eruption.

The Mount Nyiragongo volcano last erupted in 2002, killing 250 people and making more than 100,000 homeless. It is among the world’s most active and dangerous volcanoes and its activity continues to be closely monitored.

Most people who fled on Saturday have returned home, including the majority of those who fled to Rwanda. UNHCR stands ready to continue supporting the Rwandan authorities in addressing the emergency needs of people who have not yet returned to the DRC following the eruption.

UNHCR participated in a joint evaluation to assess the damage on Sunday, together with the government of the DRC and other humanitarian agencies. From the air, the eruption’s path south from the volcano is clear. Two villages on Goma’s northern tip were destroyed and two others were almost completely covered by lava. Our staff have heard testimonies from families who lost their homes, and from others who lost children and other loved ones. Entire neighborhoods have been left without any electricity and there are fears of water shortages.

The road leading to northern parts of North Kivu province is also damaged by lava, which will hamper the transport of food and goods to the area around Beni, where some 280,000 people displaced by conflict and insecurity since January 2021 rely on humanitarian aid. Beni is some 240 kilometres north of Goma, and other access routes have been blocked by closed borders since the COVID-19 pandemic began.

UNHCR is preparing to assist those in need of shelter and relief items in the Goma area in coordination with other UN agencies and non-governmental organizations, and in support of the government’s emergency response. Funding is urgently needed to help us assist those affected. UNHCR has received just 17 per cent of the US$204.8 million needed for our operations in the DRC.

This latest disaster comes on top of the over 2 million people already displaced by brutal violence in North Kivu province, of which Goma is the capital. This year alone, 450,000 people have been forced to flee their homes. UNHCR continues to work with the government, local communities, and other partners to help the internally displaced, offering shelter, core relief items and support for local protection activities, as well as protection monitoring that serves the whole response.