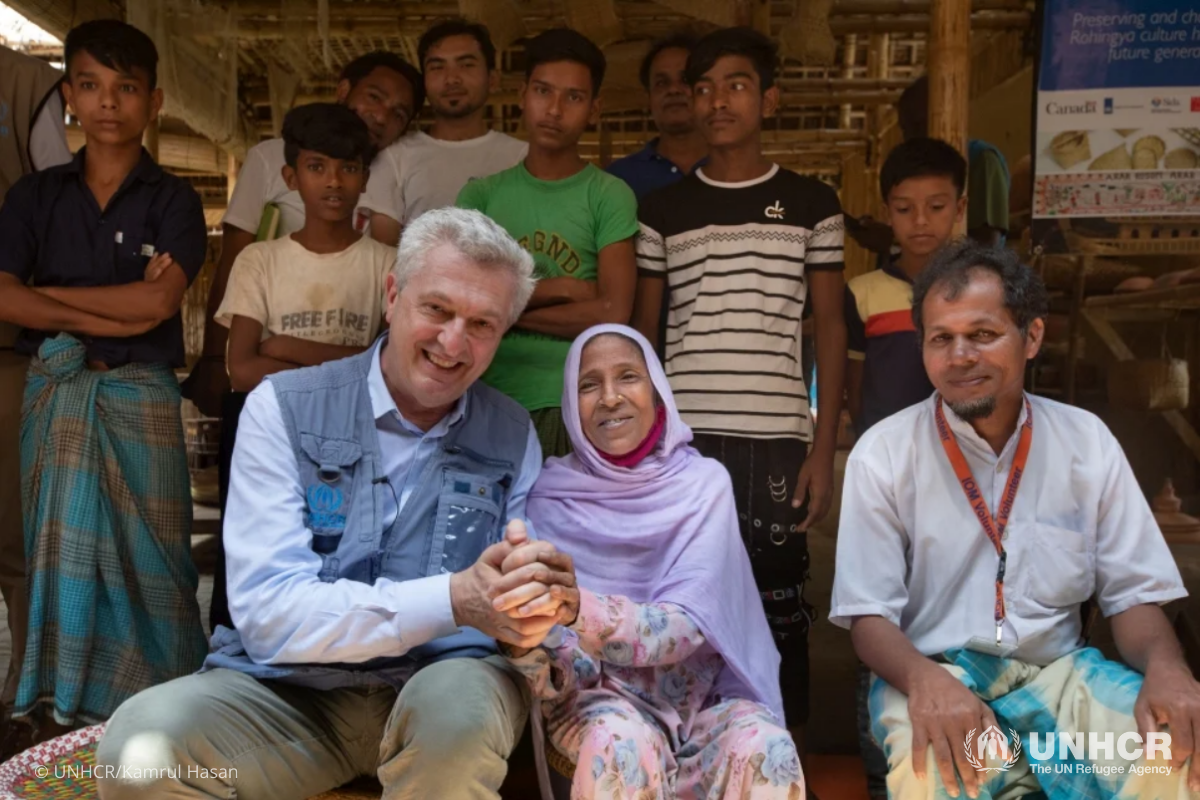 DHAKA - The United Nations High Commissioner for Refugees Filippo Grandi appealed today for sustained and predictable support for Rohingya refugees and their local host communities in Bangladesh, while emphasizing the need to maintain refugees’ hopes for voluntary return to Myanmar once the situation allows.

Grandi is currently wrapping up a five-day trip to Bangladesh where he met Rohingya refugees, the country’s top leadership, UNHCR donors and humanitarian actors.

“The world must remember the crisis that Rohingya refugees and their hosts have been facing for the last five years. The refugees’ lives depend on how the international community responds in caring for them,” Grandi said, after visiting the refugee camps in Cox’s Bazar and Bhasan Char island.

Bangladesh hosts some one million Rohingya refugees, most of whom fled for their lives from Myanmar in 2017 while others arrived many years earlier. Grandi expressed gratitude to Bangladesh and underlined the important strides in the refugee response under the leadership of the Government, including COVID-19 vaccinations for more than 88 percent of the refugee population over 18 years of age.

“Bangladesh, which has led in assisting nearly a million refugees, remains a priority partner for UNHCR, but continued international support is crucial to provide life-saving assistance and build hope,” Grandi stressed. “This is why I am here, to try to shine a spotlight on Bangladesh, its people, and the Rohingya refugees it has been hosting for decades, and to remind the international community of the importance of their support, including flexible funding to protect Rohingya refugees until they can safely return home.”

The High Commissioner said the solutions lie within Myanmar. While UNHCR, the UN Refugee Agency, and UNDP continue to work on community projects in Rakhine state under a tripartite agreement with Myanmar, initiatives must be scaled up and more support is needed to create conditions for voluntary returns in a just, safe, and sustainable manner. “The Rohingya refugees I met reiterated their desire to return home when conditions allow. The world must work to address the root causes of their flight and to translate those dreams into reality,” Grandi said.

While in Bangladesh, it is important that Rohingya refugees can live in safety and dignity, that they can send their children to school and learn from the Myanmar curriculum, which is being rolled out in the refugee camps. Some 52 percent of the refugee population are under the age of 18.

“Skills development and livelihood activities in Cox’s Bazar and on Bhasan Char are extremely important in allowing refugees to build peaceful communities, contribute to a safe environment and support their sustainable return,” Grandi added.

Some 28,000 Rohingya refugees have been relocated to Bhasan Char by the Government of Bangladesh, and the High Commissioner observed that essential humanitarian services have been scaled up. He called for continued strong Government leadership on the island, enhanced education services, skills development and livelihood initiatives.

Humanitarian agencies need more than US $881 million this year to support approximately 1.4 million people, including 920,000 Rohingya refugees in Cox’s Bazar and Bhasan Char, and around 540,000 Bangladeshis in neighboring communities. As of May 2022, the Joint Response Plan is only 13 percent funded.