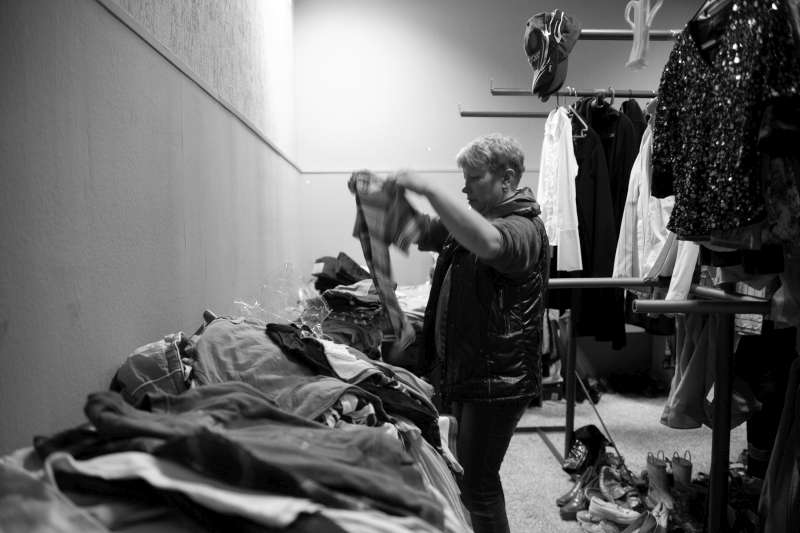 An internally displaced woman folds clothes at a sanatorium in Ukraine that has been welcoming people from Crimea.

GENEVA, May 20 (UNHCR) – The UN refugee agency on Tuesday said the tension in Ukraine had displaced an estimated 10,000 civilians and added that the number of people affected was continuing to rise.

"A needs assessment has recently been completed and we are working closely with local authorities, other UN agencies and NGO partners to help those who are most affected. So far this includes providing legal assistance, integration grants for 150 families, cash assistance for 2,000 people, and improved shelters for 50 families," UNHCR spokesman Adrian Edwards told journalists in Geneva.

He said the displacement in Ukraine started before the March referendum in Crimea, that led to that region joining Russia, and has been rising gradually since. Registration numbers are being compiled on the basis of data UNHCR is receiving from local authorities.

Among the affected population are people who have been displaced twice – first from Crimea, and then again from the eastern part of the country. Most of those displaced are ethnic Tatars, although local authorities have also reported a recent increase in registrations of ethnic Ukrainians, Russians and mixed families.

At least a third of the displaced are children. Most IDP (internally displaced people) families are moving to central (45 per cent) and western Ukraine (26 per cent), though some are also located in the southern and eastern regions. The number of Ukrainian asylum-seekers in other countries has remained low.

"Among accounts we're hearing from displaced people is that they have left either because of direct threats or out of fear of insecurity or persecution. Some report having received personal threats over the phone, via social media, or finding threatening messages left on their property," Edwards said.

"People cite fear of persecution because of ethnicity or religious beliefs or, in the case of journalists, human rights activists and among intellectuals, due to their activities or professions. Others say they could no longer keep their businesses open," he added.

The main challenges facing displaced people are access to social services, long-term shelter, transferring residence registration so that they can access their economic and social rights access to documentation, and access to livelihoods. Help for IDPs is primarily being organized through regional governments, community-based organizations and through voluntary contributions by citizens.

People are being accommodated in shelters provided by local authorities, or staying in privately owned spaces, such us sanatoriums or hotels. Others are being hosted in private homes.

"However the capacity of host communities to support people is fast becoming exhausted," Edwards said, adding: "The pressing needs include for more permanent shelter, more employment opportunities, and support for community-based and local organizations in developing long-term solutions for people who have become internally displaced."

The spokesman said UNHCR welcomed a newly adopted law on the rights of displaced people from Crimea. The law includes safeguards relating to freedom of movement of Ukrainian citizens between Crimea and the rest of Ukraine. It also allows for identity cards to be restored and covers voting rights. Further work will be needed to ensure that displaced people enjoy full equality and the same rights and freedoms under international and domestic law as other citizens of Ukraine.