GENEVA, Sept 20 (UNHCR) – In the Great Lakes region of Africa, UNHCR is urgently seeking an extra $21.4 million for its underfunded operations in Uganda for refugees who have fled from the eastern Democratic Republic of the Congo (DRC). 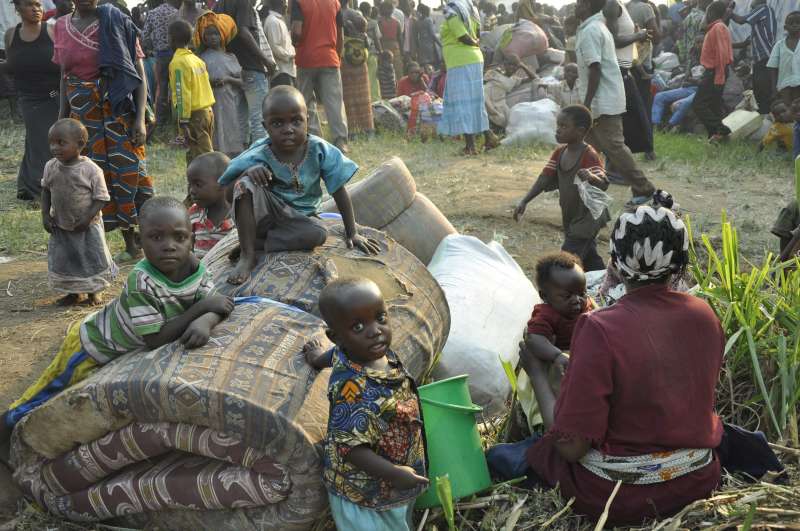 Congolese refugees with their belongings at the Bubukwanga transit center in Uganda's Bundibugyo district. © UNHCR/L.Beck

"The amount covers needs till the end of the year and has been largely revised to reflect the influx into Uganda's Bundibugyo district of tens and thousands of refugees from the Kamango area of DRC's North Kivu province since July," UNHCR spokesman Adrian Edwards to journalists in Geneva today.

Including this additional amount, UNHCR is seeking a total of $43.7 million to help Congolese refugees who have arrived in Uganda to escape violence in North Kivu province since early 2012. At the moment this $43.7 million program is only 28% funded.

The recent influx from North Kivu to Bundibugyo began in July when a little-known Ugandan rebel group active in the DRC, the Allied Democratic Forces, attacked the town of Kamango and fought with Congolese government troops, triggering waves of displacement.

The situation is currently more or less stabilized, but about 100 people a day are still crossing the border into this mountainous, harsh, but densely populated region.

Further south, near North Kivu's capital, Goma, continuing clashes between armed groups and the Congolese army, backed by the UN intervention brigade, as well as fighting among the different militia and general lawlessness, also continues to push people into Uganda.

To cope with the new displacement into Bundibugyo, UNHCR helped establish a transit center at Bubukwanga. But this soon became over-congested, putting pressure on health, water and sanitation services, and endangering the welfare and safety of refugees in an area that is prone to disease such as cholera and the Ebola virus.

For those who seek longer-term protection, UNHCR has since mid-August been arranging transfers to an existing refugee settlement at Kyangwali in Hoima district. To date, just under 11,000 refugees have relocated to Kyangwali, with another 10,000 in the transit center and 20,000 along the border.

"The new appeal covers operations for new arrivals from the Democratic Republic of the Congo in mid-west Uganda (Bundibugyo) as well as in the country's south-west (Kisoro and Kanugana districts).

"A priority for the funds will be to continue to relocate refugees to Kyangwali," said Edwards in Geneva. "We have been moving 1,000-1,200 people a week," he added. The funding is also needed to ensure assistance for these refugees moving to the Kyangwali settlement, where they are allotted land for farming and shelter by the government.

Edwards said the funds were vital for the provision of health, water, sanitation and education services as well as shelter materials and farming packs and household items. "We would also like to build or rehabilitate health centers and schools in the settlement as well as improve roads and construct more boreholes to ensure the refugees receive more than the current 3.6 gallon of water per person per day."

The fresh UNHCR request for funds forms part of a revised UN inter-agency appeal of a total of $92 million for the continuing arrivals from the DRC to mid-west and south-west Uganda. The UN country team in Uganda is working hard to provide food, non-food aid and basic services.

There are currently an estimated 2.6 million internally displaced people in the DRC, while more than 290,000 refugees have fled the country since the start of last year, In Uganda, more than 170,000 have been assisted in three districts.