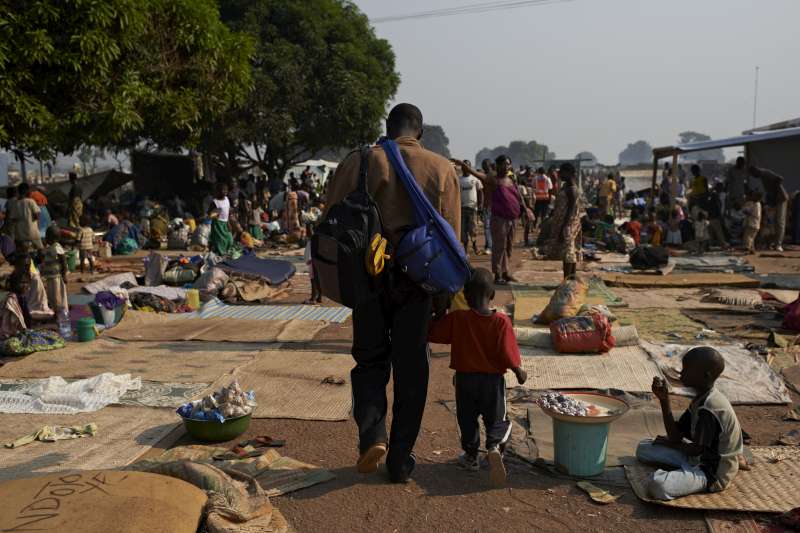 A man and his child walk through a crowded site for internally displaced people in Bangui. Many people in the capital remain at risk.  © UNHCR/S. Phelps

BANGUI, Central African Republic, February 25 (UNHCR) – The UN refugee agency on Tuesday called for stepped up security to protect more than 15,000 people in 18 locations surrounded by armed groups across the north-west and south-west of Central African Republic. "These populations are at very high risk of attack and urgently need better security," said spokesman Adrian Edwards, citing monitoring by UNHCR and its partners.

He said that although violence has hit all communities in the Central African Republic, most of the people who are trapped are Muslims under threat from anti-Balaka militiamen. "Areas we are particularly worried about include the PK12 neighbourhood in Bangui and the towns of Boda, Bouar and Bossangoa," Edwards said.

Targeting of populations based on their religion has been happening since September last year, and affecting both Christian and Muslim communities. In places such as Paoua and some areas of Bangui, communities continue to live and work together. However, atrocities have become frequent.

On Saturday, three Muslim men were reported killed in a neighbourhood of Bangui close to the airport. Last week, a convoy carrying people escaping from a besieged site at PK12 was attacked by anti-Balaka militiamen. All 21 men in the convoy were killed, leaving 119 frightened children and 19 women, who fled to a nearby village. Recently in Boali, north of Bangui, an anti-Balaka attack left 11 people dead. The 800 survivors sought refuge at a church, where they have been hosted by the priest and protected by international forces.

UNHCR and its partners are responding to these situations through protection-by-presence, humanitarian assistance, advocacy for protection measures and, in exceptional cases, by facilitating the movement of these communities to safe sites. But humanitarian efforts alone cannot solve the crisis.

"We are appealing again to all armed elements to stop indiscriminate attacks against civilians. We are also calling for the deployment of more international troops as their numbers are far too low considering the size of the country and the scope of the crisis," the UNHCR spokesman said.

The new caretaker government in Central African Republic needs urgent support to undertake effective law enforcement, in particular through the deployment of police and re-establishment of a judicial system to end impunity. Armed militias need to be disarmed, de-mobilized and, when possible, reintegrated into society.

Quick development action is also needed to allow displaced people to recover a more stable environment and for economic and social life to return to normal. Since December 2012, violence and instability have forced close to a million people to flee to safer locations within the Central African Republic and to neighbouring Cameroon, Chad, the Democratic Republic of the Congo and the Republic of Congo. More than 700,000 are internally displaced, including some 273,000 in Bangui spread over 66 sites, while more than 288,000 people have fled to neighbouring countries.