UNHCR Special Envoy Angelina Jolie calls for protection and support for the people of Yemen, and an end to the conflict to stop human suffering 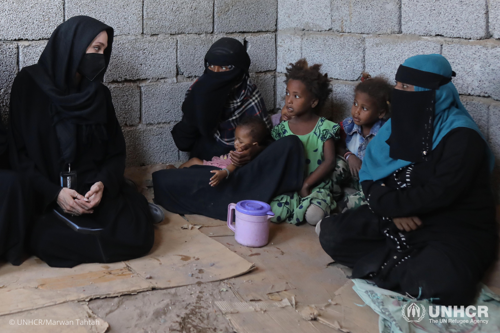 Yemen – Angelina Jolie, the Special Envoy for UNHCR, the UN Refugee Agency, is in Yemen this week to draw attention to the devastating consequences of the seven-year-old conflict on the civilian population.

Yemen’s protracted conflict has led to multiple crises affecting every aspect of life for ordinary people. It has resulted in thousands of civilian casualties – in January 2022, a civilian was killed or injured every hour – as well as widespread destitution, hunger and economic collapse, pushing Yemenis to the brink. Today, two out of three Yemenis are in need of humanitarian assistance to survive – equating to 20 million people. Ninety-two percent of all displaced Yemenis have no source of income at all and must survive on less than $40 a month.

Jolie, who has been Special Envoy for Refugees since 2011, arrived in Yemen on 6 March for a three-day visit. She met both internally displaced Yemenis as well as refugees in the north and south of the country.

UNHCR’s Special Envoy Jolie called on all parties to the conflict to respect and commit to international humanitarian law. She also called for all parties to avoid targeting civilians, and to ensure unimpeded humanitarian access to all people in need, safe passage for civilians to flee conflict areas, and a negotiated political settlement.

Jolie urged the international community to increase its support for the severely underfunded humanitarian response, ahead of the High Level pledging conference for Yemen to be held on 16 March, and to redouble efforts to seek an end to the violence. More than 4 million people have been displaced in the past seven years.

At a site in Lahj Governorate in south Yemen, where people who have fled home over the past few years are living in flimsy shelters, displaced families told Special Envoy Jolie how they lost their homes, loved ones and livelihoods, describing how the conflict had shattered their hopes for their children and families. Mudeera, a mother of five who has been displaced from Taiz for the past four years, said that none of her children went to school, had a birth certificate or been vaccinated. Every day she struggles to feed them anything other than tea and bread.

In north Yemen, at a site for internally displaced people, Jolie met 65-year-old Maryam, who has been displaced since 2016 and who lost her husband to the conflict. She told Jolie how three of her granddaughters had passed away because the family was unable afford the healthcare they needed.

During her visit and on International Women’s Day today, Jolie witnessed the catastrophic impact this conflict has had on Yemeni civilians, especially women and girls, who make up more than half the displaced population. Already facing levels of gender inequality and discrimination that are among the world’s worst, their plight has been compounded by the unending conflict.

Jolie said: ‘The level of human suffering here is unimaginable. For every day that Yemen’s brutal conflict continues, more and more innocent lives are lost and more people will continue to suffer. We live in a world where suffering and horror dominates headlines, but where such headlines can result in overwhelming displays of compassion and international solidarity. I hope this compassion and solidarity will be extended to the people of Yemen, who urgently need a swift and peaceful resolution to this conflict – and to other displaced people, whoever and wherever they are in the world.

“With over 80 million people displaced worldwide and aid appeals underfunded globally, we urgently need to find solutions that enable conflicts to be addressed and displaced people to be able to return home in dignity and safety.”

UNHCR and its partners remain on the ground in Yemen, providing lifesaving assistance by delivering shelter, cash assistance and psychological support, as well as programs that specifically help protect children and prevent violence against women. While UNHCR hopes to maintain and expand its support in 2022 amid an escalation in fighting, the UN appeal for Yemen remains underfunded.