UNHCR Special Envoy Angelina Jolie Pitt has been commemorating World Refugee Day with Syrian refugees in Turkey, which has overtaken Pakistan to become the world's largest refugee-hosting nation with more than 1.77 million in urban areas and government-run camps. 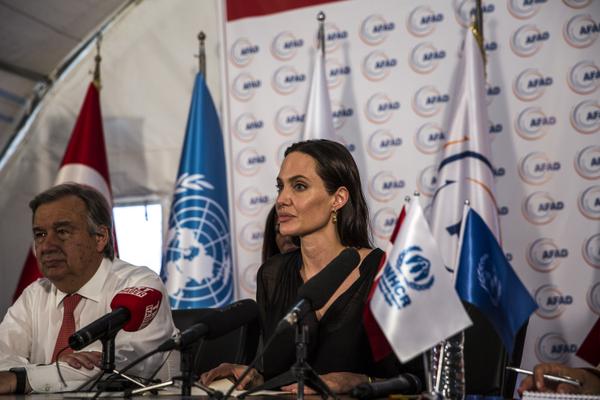 The Special Envoy and UN High Commissioner for Refugees António Guterres also met Turkey's President Tayyip Erdoğan to thank him and his people for the country's generosity towards Syrian and Iraqis refugees and to discuss the challenges that Turkey and other host nations face, and their need for support.

In her capacity as co-founder of the Preventing Sexual Violence Initiative, Jolie Pitt also raised her work on women's rights and the global campaign against sexual violence in conflict. Later, while visiting the Midyat Refugee Camp in Mardin, south-eastern Turkey, she made a powerful World Refugee Day call for more action to prevent conflict and support refugees. Her statement follows:

"We are here for a simple reason: This region is at the epicentre of a global crisis. Nearly 60 million people are displaced from their homes. That is one in every 122 people on our planet. Our world has never been richer or healthier or more advanced. Yet never before have so many people been dispossessed and stripped of their basic human rights. We should call this what it is: not just a "refugee crisis," but a crisis of global security and governance, that is manifesting itself in the worst refugee crisis ever recorded – and a time of mass displacement.

The greatest single source of these massive refugee flows is Syria. In the space of four years, Turkey has become the country with the largest number of refugees anywhere in the world, with 1.8 million displaced Syrian and Iraqis. Lebanon, where I was yesterday, is hosting an even greater density of displaced people: every fourth person in Lebanon is now a Syrian refugee. People are running out of places to run to. If you are an Iraqi or a Syrian fleeing violence, where do you go? Every border country is being pushed beyond its limits.

That is why we see so many dying at sea. It is not a "new trend," it is a result of those fleeing country after country and finding no safe place. These are not economic migrants looking for a better life, these are desperate refugees who are fleeing war and persecution. The average stay in a refugee camp is 17 years. Think of your own life. Think of what that would mean. For many, it is their entire childhood. During displacement you might be able to get an education, or continue your education. But very likely, you will not.

As a refugee, you cannot legally work in a host country. So your skills and education will dull over those long years and your much-needed contribution will be lost. As a refugee you learn how the world feels about you. You know if your suffering causes outrage and compassion – or if it is mostly ignored. Familes like the six young people I met yesterday, living in Lebanon without parents, on half food rations and paying US$100 a month to live in a tent because UNHCR does not have the funds or capability to take full care of everyone – they know.

We should see this time in displacement as the time where we should take the most care, and give the most support. Not because they are vulnerable, but because in fact they are the future stability of all the countries we say we are so concerned about. So my first message is that it is due time for people to respect the plight of refugees and see their value. We must protect them, and invest in them. They are not a problem, they are part of the solution to this global crisis. They are the potential for the rebuilding and restabilization of countries.

Today – as happened every day on average last year – over 40,000 people will be forced from their homes. And it will be the same tomorrow. And the next day. And every day after that, if this political inertia continues.

It is hard to point to a single instance where as an international community we are decisively addressing the root causes of refugee flows. Displacement is multiplying because the wars don't end, and countries emerging from conflict don't get the support they need. We handle crises by discussing either boots on the ground or aid relief. The global crisis is showing us that this narrow view of dealing with conflict is wrong and ineffective. UNHCR, along with other UN and NGO agencies, cannot be expected to manage the chaos of a population the size of France displaced.

I have spent the last 14 years among the UNHCR staff. I know their dedication. Even love for refugees. I have also seen them overwhelmed and emotional over the last few years. They and other UN agencies and NGOs are filling a gap left by the international community. We are past the breaking point. The answer to a world crisis like this is not how many financial appeals can be met. Or in truth, by what percentage they can be met. I am of course grateful for the funds countries have contributed even if they are not enough to meet all the needs.

But I say to those countries, your job is not to fund displacement but to prevent it. To end it.

Displacement at 60 million is a sign of our inability to work together as a community, to apply all our laws and uses our collective institutions effectively. To live by our standards and keep our word. There is an explosion of human suffering and displacement on a level that has never been seen before, and it cannot be manage by aid relief, it must be managed by diplomacy and law. This is a central problem. We cannot pick and choose which human rights violations we will and won't tolerate.

We have the tools we need – the resolutions, the doctrines, the conventions, the courts. But if these tools are misused, inconsistently applied or applied in a self-serving way, we will continue on this trend of displacement and it will grow and grow. It is inhumane to expect all of these families to tolerate this kind of life. We all know what needs to be done, we must do better. And it is self-evident that we have to start with Syria.

I call, again, on the United Nations Security Council: Send your ministers and ambassadors here. Witness this crisis for yourself. See that it simply cannot go on. And that it is past time for a credible plan to reach a political solution to end the conflict. I thank the people of Turkey, Iraq, Lebanon and Jordan for their generosity, and all host countries. To all the families here, and around our world, marking this Holy Month, I say, "Ramadan Kareem." And I pay tribute to refugees themselves – the people we rightly celebrate today, not only here in Turkey but around the world. Thank you."