QALAI GUDAR, Afghanistan, December 27 (UNHCR) – Thanks to their foresighted parents and UNHCR Special Envoy Angelina Jolie, 350 Afghan girls recently accomplished what not every girl in Afghanistan gets to – complete a year of schooling and advance to a new school year in a public graduation ceremony. 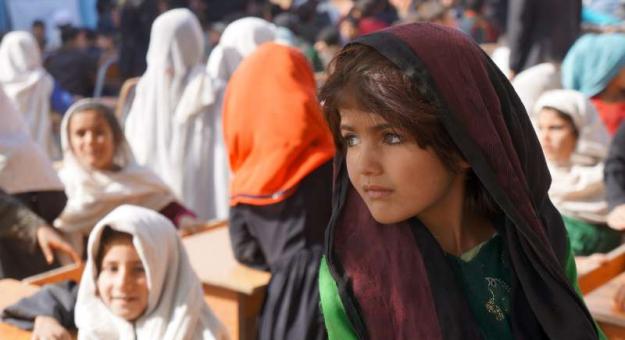 Girls' education in the returnee area of Qalai Gudar has received a boost, thanks to this school built with the support of UNHCR's Special Envoy Angelina Jolie. ©UNHCR/S. Sisomsack

The ceremony on the outskirts of Kabul also symbolized a rise from the ashes for a village almost totally destroyed by decades of conflict that tore apart Afghanistan from the 1970s until the early years of this century.

On a visit to the country two years ago, Jolie was moved by the desire of Afghan girls for education. She offered a donation for UNHCR to build a school for girls in Qalai Gudar which lies north of Kabul.

Angelina Jolie "is a generous and wonderful woman," said 13-year old-Hameda, after graduating from the first grade last week. She jumped at her first chance to enter school, even though past what many would consider the normal age for starting primary school.

"Thanks to her (Jolie) we now have a wonderful school and we can continue our education," Hameda added. Only two years old when her family came back to Afghanistan after being refugees in next-door Pakistan, Hameda also has five brothers and sisters who attend the school.

Her family was one of about 2,300 who returned to Qalai Gudar, a village in the Shomali Plains, following the collapse of the Taliban regime.

But what they found in this area once famous for its bountiful orchards and rich farming land was a scene of utter devastation. Nearly all houses, buildings, irrigation systems and other infrastructure had been destroyed. Slowly, with the help of UNHCR, the villagers began to rebuild their community.

Unexpectedly, one of the first things they asked for was a school for their daughters. During their time as refugees in Pakistan, parents had come to realize the value of education for their girls as well as boys. They set up a makeshift school for the girls in the open air within the compound of the local mosque, determined that their daughters would not suffer from the cultural traditions and limited facilities that often pose obstacles to education of girls and women in Afghanistan.

Construction of the school was completed a year ago and has been providing a place for girls like Hameda to study in a culturally sensitive environment. The Department of Education has provided nine teachers – so far only one a woman – and some educational materials. The school runs two shifts to meet demands of the 450 students – 400 girls and 50 boys.

There are still challenges. Some basics – like textbooks for the first three grades – were missing, but Jolie stepped in again with another contribution. UNHCR added some cash and was able to present all pupils at the first graduation ceremony with some highly prized items: stationery, notebooks, pens, and rulers.

Supporting girls' education and empowerment is one way UNHCR aims to promote the sustainability of refugee returns and to encourage refugees who are still in Pakistan and Iran to return home. UNHCR also works with the government of Afghanistan to provide assistance and protection to five million returned refugees and, in coordination with other partners, to some 600,000 Afghans internally displaced by conflict.

Just one year old, the school is already changing the community. Parents have pledged to delay their daughters' marriages to allow them to finish their education first.

Omaira, 14, realizes she's lucky to get a chance her older sisters did not. When the family came back to Afghanistan five years ago there was no school, so her sisters missed out on education.

"I have some education now," Omaira says with pride. "I know how a woman can live and I have learnt the difference between what is right and what is wrong."

By Marie-Hélène Verney, Khalida Dunya and Sediqullah Amarkhil in Kabul