Alarming rise in rape and violence against women in DRC 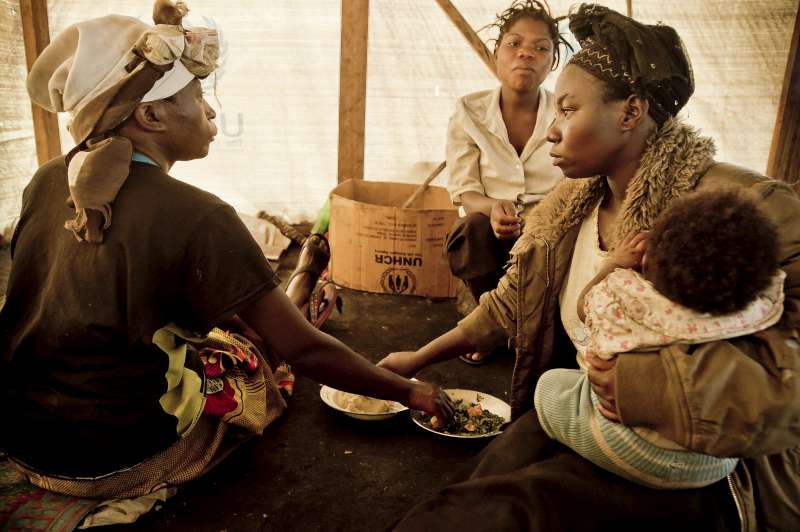 These displaced Congolese women eat together in the tent they share in eastern Democratic Republic of the Congo. UNHCR is concerned about growing violence against women.© UNHCR/F.Noy

Statistics gathered by UNHCR in North Kivu point to an alarming rise this year in acts of violence against women and girls in the province, particularly rape. "Our protection monitoring teams have registered 705 cases of sexual violence in the region since January, including 619 cases of rape," said a UNHCR spokesperson. "During the same period in 2012, our staff had registered 108 cases. The survivors of SGBV [sexual and gender-based violence] included 288 minors and 43 men."

The spokesperson said UNHCR was worried that the fighting between the Allied Democratic Forces, a Ugandan rebel group, and the army as well as renewed fighting between the army and the rebel M23 movement near the North Kivu capital, Goma, over the past two weeks would increase the danger for women in the region, including those living in camps.

UNHCR has been working closely with other humanitarian organizations and the authorities to strengthen the monitoring of sexual violence and the response. The agency has, for example, helped run courses for 96 police officers deployed in the camps and sites in Goma on how to prevent sexual violence and handle rape cases.

The refugee agency is also helping to create community centers and train focal points among the displaced population to enable them to identify sexual violence cases and refer the victims for health care and psycho-social support. UNHCR is also promoting the use of alternative fuel to firewood in a bid to reduce the exposure of women to sexual violence when they go out to look for wood. The current phase of this project will benefit 2,000 households in camps near Goma.

Meanwhile, the fighting around Goma has forced 6,000-7,000 people to flee their homes since July 14. The majority are women and children as well as young boys fleeing forced recruitment.

The newly displaced are staying in schools and churches in the northern part of Goma, some 6 miles from the frontline. Together with the International Organization for Migration and other partners, UNHCR is transferring the displaced to existing camps where they receive shelter and basic humanitarian aid.

In North Kivu's Kamango area, the fighting this month has displaced an estimated 14,000 civilians, who have sought shelter in the bush and in villages around Kamango, bringing to 40,000 the number of people internally displaced in the area.

UNHCR is also alarmed by reports of human rights violations in the Kamango area, including the murder of at least 15 civilians, abductions, forced labour, beatings and illegal taxation. A recent evaluation by UNHCR field staff found that displaced people are facing food shortages because they cannot go to the fields to collect their crops.

Access to water and health services is also extremely difficult after 80% of the health centers in the area were looted. Medical staff in the area report many cases of diarrhoea and respiratory infections due to shortage of clean water and latrines. Humanitarian access is a challenge and recent reports state that the situation remains tense in the area.

A total of 967,000 people are displaced throughout North Kivu as a result of years of conflict.