UNHCR struggles to keep up with arriving Congolese refugees

BUBUKWANGA, Uganda, July 19 (UNHCR) – A week after Congolese civilians began fleeing into western Uganda, the UN refugee agency is trying to reach the thousands of people still spread across hills along the border, and simultaneously to manage the situation at an increasingly crowded transit facility further into Uganda. 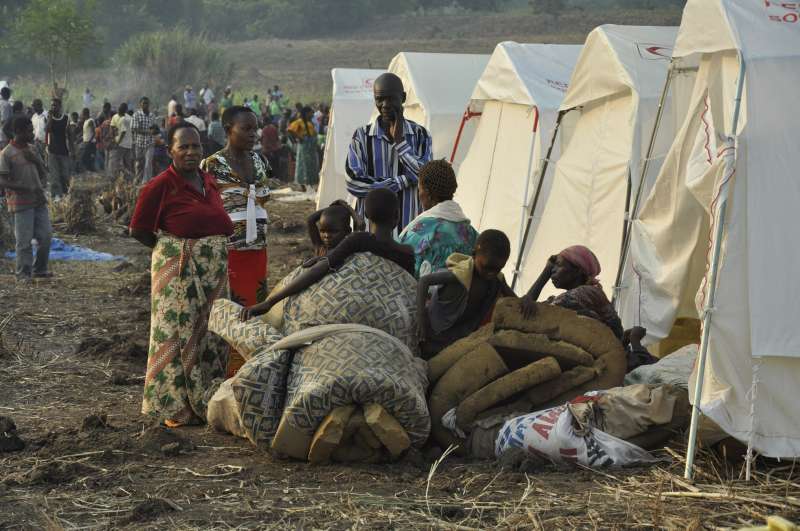 Many of the refugees manage to flee to Uganda with possessions, cooking equipment, mattresses and even livestock. ©UNHCR/L.Beck

As of Thursday evening, 15,500 refugees had been transferred away from the unsafe border area to the Bubukwanga transit center, where there are protection and other services. The transit center has a maximum capacity of 25,000 people, even with a new 4.5-acre land allocation by the Ugandan government.

The Uganda Red Cross Society, which runs the center, estimates that more than 66,000 people fled from the fighting last week in Democratic Republic of the Congo's (DRC) North Kivu province between government troops and the Allied Democratic Forces, a Ugandan rebel group.

UNHCR and government partners are running 15 trucks to transfer refugees and their possessions to the facility at Bubukwanga, located more than 12 miles from the border. Refugees have been moved entirely from four schools and some 5,000 are now at the main site, Butongo Primary School.

At Bubukwanga, after the Ugandan Red Cross erected 229 tents for individual families, UNHCR switched to putting up communal shelters to provide room for more people more quickly. So far, 16 large communal shelters have been erected.

Many refugees told UNHCR they had fled for their lives, bringing nothing with them and then spending several nights in the bush, where there were cases of women giving birth. People then walked about 9 miles to reach Butongo, where they had little food and were waiting for transfer to the transit centre here.

One refugee at Butongo, Marinyese Nyota, 35, told UNHCR on Thursday that she had fled from the North Kivu town of Bayumba last week with her husband and five children. They spent three nights in the bush and then three nights in Butongo. "We ran without anything. When the rebels arrived, no one took anything, not even a hoe, not even bedding, not anything. You are only saving your body to get here."

The refugees in the school were not given food or aid. Children were getting diarrhoea. The hygiene and sanitation conditions were poor, but trucks were coming and going constantly to transfer refugees to the transit center.

"It's painful when I see my kids not eating. My children go to sleep hungry. They suffer and I keep thinking what will I do? The thoughts are killing me and I'm getting high blood pressure from these thoughts," said Marinyese, who soon after put her children on one of the trucks and said she would follow on Friday.

At the transit center, two communal kitchens have been set up, supplying three hot meals a day with food provided by the World Food Programme. A third kitchen is under construction. Nearly 80 pit latrines have been dug. So far there have been no outbreaks of disease.

Through contributions of partners, including UNICEF, Médecins Sans Frontières (France), Oxfam and the Lutheran World Foundation, enough water tanks are arriving in the transit center. However, UNHCR remains concerned about water supplies as the number of refugees in the center grows.

Children between the ages of nine months and 15 years are now being vaccinated against measles and receiving Vitamin A supplements and deworming tablets. Medical teams are also identifying sick children and looking out for anyone whose nutrition might have suffered from going a week or more without a proper meal during their flight or stay on the border.

Médecins Sans Frontières is going along the border providing medical care and giving out a nutritional supplement to refugee children among those still waiting to be transferred. The Ugandan Ministry of Health is also beefing up numbers of medical staff and medical supplies in the area to help refugees.

The transit center is intended to be the refugees' home for no more than three weeks. It is considered safe, but UNHCR and the government are identifying other possibilities for relocation to places where people could get protection, plots of land to farm for themselves, as well as shelter materials and food rations.

The arrival of thousands of refugees disrupted classes for a week at many schools in Bundibugyo district where the refugees were housed. UNHCR is working with the Office of the Prime Minister to make sure classes can resume next week.

Although planning for a possible lengthy stay of refugees is under way, at the Lamiya Bridge in Busunga, UNHCR staff saw hundreds of refugees returning to eastern DRC on Thursday, carrying belongings, including ducks and goats. Many other refugees are living with friends and relatives on the Ugandan side, and it is not clear how many remain along the border.

Meanwhile, renewed fighting this week in North Kivu between DRC government troops and the M23 rebel movement caused 4,200 people to flee to the provincial capital, Goma, according to the UN Office for the Coordination of Humanitarian Affairs. The displaced are sleeping in schools and churches in Goma. UNHCR staff report that more than 660 people who fled to Rwanda earlier this week to escape this fighting, remain in Rwanda. There have not been any new arrivals since Monday.

By Kitty McKinsey in Bubukwanga, Uganda