Less than a month into the regional refugee response plan for 2013, UNHCR and its partners have launched ambitious programs of registration, outreach and financial assistance envisaged in the $1.1 billion plan.

But UNHCR spokesman Adrian Edwards told journalists in Geneva on Tuesday that the agency had only received 18% of the funding it needs so far. "Unless funds come quickly, thousands of vulnerable Syrians will not benefit from much-needed assistance," he stressed. 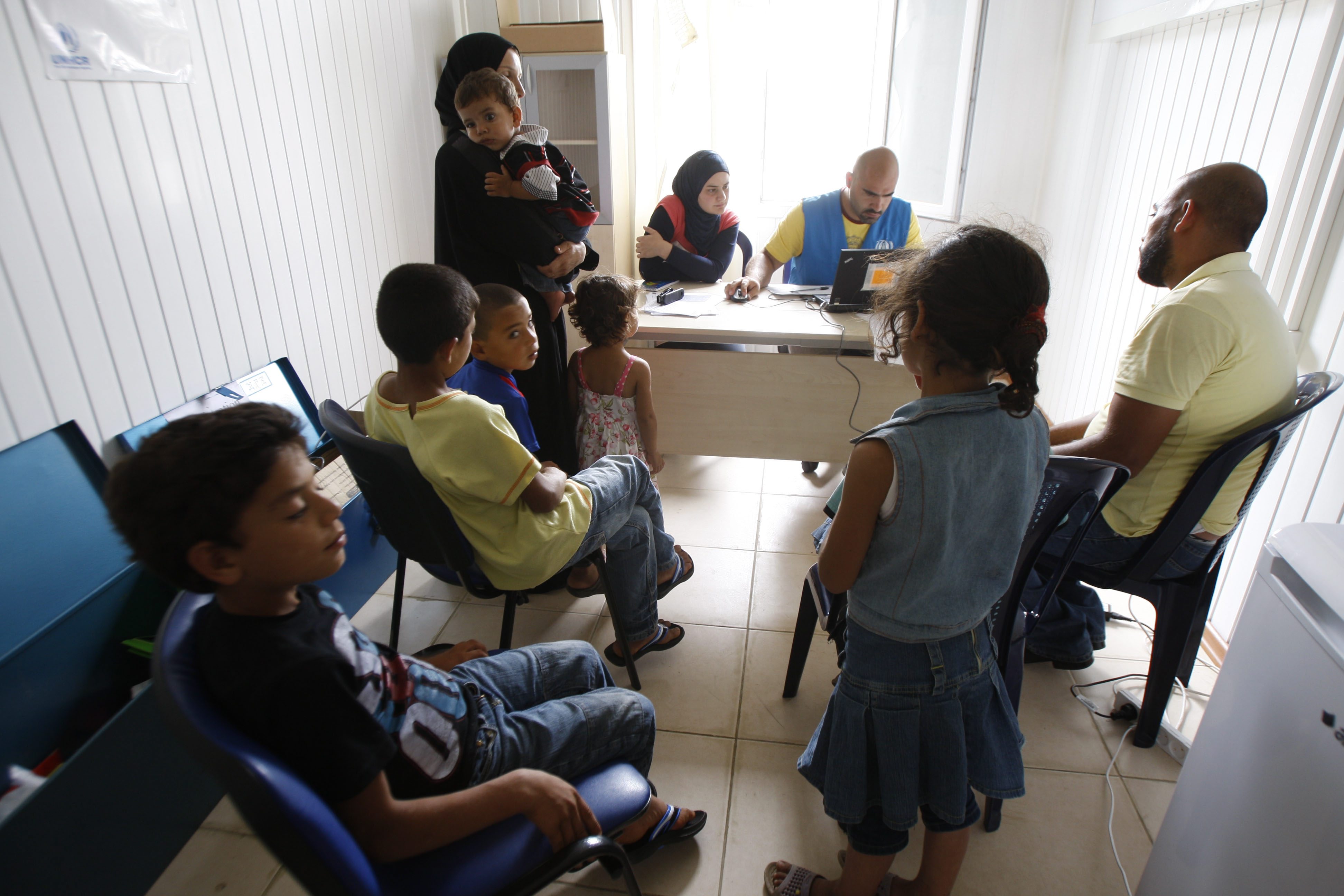 Members of a Syrian refugee family give details to a UNHCR staff member during their registration in northern Lebanon. © UNHCR/S.Malkawi

Reviewing the current situation in neighbouring countries, Edwards said that UNHCR staff in Lebanon were registering an average of 1,500 refugees daily through four registration centres across the country, and was increasing capacity to respond to the growing needs. Last Wednesday, registration figures reached just under 1,800 people, the highest daily registration figure since the beginning of the response.

To meet the growing needs UNHCR has established a new site in the Bekaa Valley, and will be opening a registration site in Tyre in the coming months. "We have also identified land for expanded registration in Beirut," Edwards said, adding that "these efforts will reduce waiting periods that currently stand at an average of two months."

UNHCR is also working with the Lebanese authorities to identify two transit sites to accommodate refugees temporarily until appropriate accommodation can be found. The aim is to ensure that newly arrived refugees are safe and warm.

The spokesman also said that UNHCR planned to expand cash assistance to 18,000 beneficiaries by June. Families in need will receive an average grant of $240 a month to contribute to their rent and living costs. This grant will increase refugees' ability to find accommodation and purchase needed clothes and kitchen and other household items and therefore also contribute to the Lebanese economy.

Edwards said that an accelerated registration exercise was due to begin today in Jordan, aiming to process up to 1,400 Syrian refugees a day in the Amman registration centre. This number will increase further once the registration centre in Irbid, in northern Jordan becomes operational. The goal is to clear 50,000 appointments by the end of February.

The spokesman also noted that Jordan's Za'atri camp had experienced a massive increase in arrival numbers, with 8,821 Syrian refugees crossing the borders in the past five days. "Refugees have arrived throughout the night and long into the day marking a significant change from earlier trends when the majority arrived at night," Edwards noted.

Some 7,700 refugee families (30,000 people) in Jordan are now benefitting from cash support, but due to a funding shortfall, UNHCR was unable to assist all 8,523 families identified for cash assistance for this month. With 80% of Syrian refugees living in urban communities, cash aid has been instrumental in allowing the most vulnerable households to cover their basic needs such as rental costs.

UNHCR has also strengthened its outreach to Syrian refugees, with close to 11,000 home visits carried out by UNHCR field teams and staff of International Relief and Development across Jordan since April of last year. "These visits have helped us reach the most vulnerable, including elderly refugees with medical needs and female-headed households," Edwards said.

The situation of most urban refugees is becoming increasingly difficult. Many are living in poorly insulated rooftop shelters and basement studios.Many are surviving on the generosity of Jordanian neighbours, who have limited resources themselves.

In Iraq, more than half of the 73,150 Syrian registered refugees are living in refugee camps, with 35% living in urban areas. UNHCR and its partners, including the authorities, have countered the winter threat by scaling up distribution of plastic sheeting, mattresses, kerosene, stoves, heaters, fleece blankets and quilts. Other initiatives include replacement of lightweight tents with more durable family tents.

Tents are also needed in Turkey, where UNHCR has provided 18,500 winter adapted tents to the Turkish Red Crescent. According to the Turkish government, there are 156,801 refugees hosted in 15 camps in seven provinces.

Meanwhile, UNHCR analysis of registration data for almost 280,000 Syrian refugees registered in Jordan, Lebanon, Iraq and Egypt shows that more than half of the population is children, 39% under the age of eleven. One in five households are female headed. Close to 90% of Syrian refugees arrived in 2012.

Donate to the UN Refugee Agency today to help refugees from Syria!