The UN refugee agency today welcomed the European Commission's proposals unveiled on Wednesday to address the current refugee crisis in Europe. "Given the urgency of the situation, these proposals need to be implemented fully and swiftly," UNHCR spokesperson William Spindler told a press briefing in Geneva.

The proposed relocation scheme for 160,000 refugees from Greece, Italy and Hungary would go a long way to address this crisis, he said. "Our initial estimates indicate even higher needs, but the focus must now be on ensuring that all Member States take part in this initiative, and that it is swiftly implemented." When relocating refugees, he added, their needs, preferences and specific qualifications should be taken into account to the extent possible. 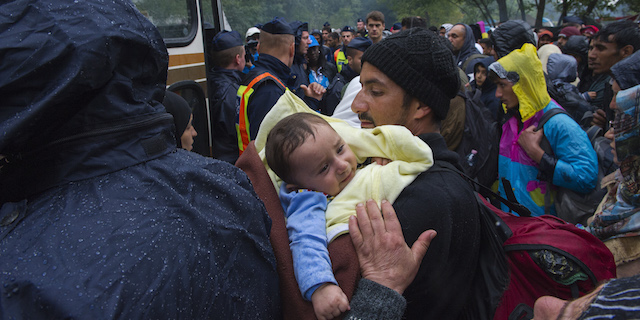 A father cradling his sick child waits in the rain to board a bus to a police pre-registration centre in Hungary. © UNHCR/M.Henley

The relocation scheme can only succeed, UNHCR said in a related statement outlining its own proposals, if it is accompanied by large-scale emergency reception, assistance and registration efforts in the countries most impacted by arrivals, particularly Greece, Hungary and Italy. To support these countries, UNHCR is calling on the EU to mobilize its asylum, migration, and civil protection agencies and mechanisms, including the resources of Member States, with the support of UNHCR, IOM and civil society.

"When disembarking in Europe or entering the European Union," Spindler told reporters, "refugees must find a welcoming environment and immediate response to their basic needs."

UNHCR welcomes the reference to opening legal channels for migration and encourages Member States to expand these legal avenues for refugees, through enhanced resettlement and humanitarian admission, family reunification, humanitarian visas, and other schemes. With more legal alternatives to reach safety in Europe, fewer people in need of international protection will be forced to resort to smugglers and undertake dangerous irregular journeys.

While calling for strong measures to be taken against people traffickers and smugglers, UNHCR insisted that the management of borders needs to be consistent with national, EU and international law, including guaranteeing the right to seek asylum.

UNHCR supports States implementing effective return policies for individuals found not to have a valid protection claim and who cannot benefit from alternative legal means to regularise their stay. "These people should be assisted to return quickly to their home countries, in full respect of their human rights," Spindler said.

UNHCR is pleased to see a reference in the Commission's proposals to the critical need to address the root causes of forced displacement around the world. A comprehensive response to refugee situations needs diplomacy, political will, and concerted action for the prevention, as well as resolution, of conflicts that force people to move. Greater investment in conflict prevention and resolution as well as durable solutions should therefore form an integral part of Europe's comprehensive approach to addressing forced displacement.

Efforts to address the root causes of the refugee crisis should include increased funding for humanitarian assistance to refugees and economic support to hosting countries, most notably around Syria, Iraq, Afghanistan, Eritrea and Somalia.

UNHCR is already ramping up its capacity in all countries affected by the current refugee flows and is ready to fully support all measures by the European Union in effectively responding to the present crisis.

To see the full set of UNHCR's proposals click here