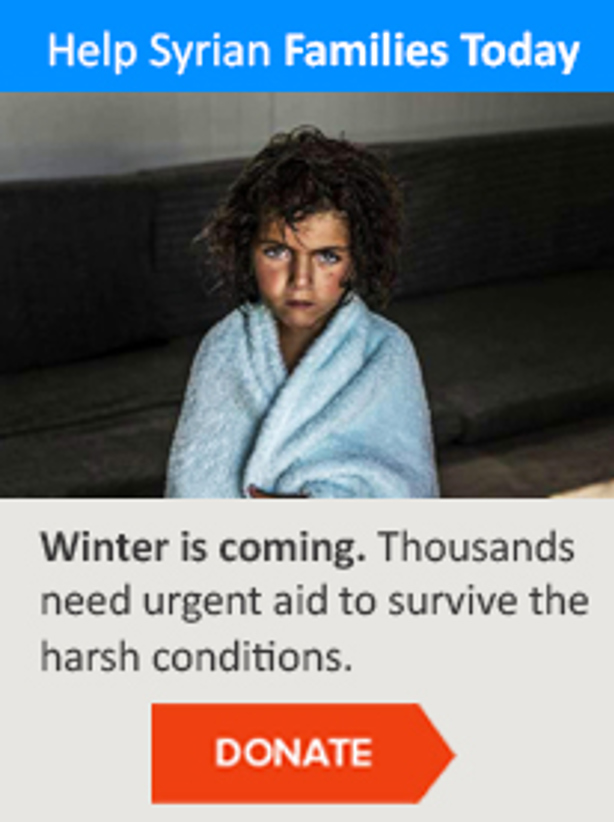 The UN refugee agency warns that a US$58.45 million funding shortfall, coupled with this year's sharp recent growth in internal displacement, could leave up to 1 million Syrians and Iraqis without proper help as winter approaches.

"The shortfall affects our winter preparedness programs, although we have already invested US$154 million on winter aid for Syrian and Iraqi refugees and internally displaced, and means that UNHCR is having to make some very tough choices over who to prioritize," chief spokesperson Melissa Fleming said in Geneva.

"Factors we are considering include the elevation of refugee settlements, the composition of the family unit (e.g. number of children and female-headed households), family health concerns, new arrivals, available family resources, shelter conditions and other considerations. For those we're unable to prioritize, the conditions could nonetheless be very tough," she added.

While the problem is most acute in Iraq and Syria, there are also needs in other parts of the region. This will be the fourth winter away from their homes for many Syrian refugees and the first for the 1.9 million Iraqis who have become internally displaced this year.

In Iraq, the needs are massive but funding has not kept pace with the new displacement. With 1.9 million IDPs and 225,000 refugees – and 300-500 more arriving daily in northern Iraq from the Syrian border city of Kobane – UNHCR is deeply concerned about the ability of the international community to meet urgent winter needs.

Approximately 800,000 people are in need of shelter assistance, while 940,000 lack basic winter household items. With current funding, UNHCR expects to reach only 240,000 displaced Iraqis with winter aid instead of the 600,000 planned under an inter-agency effort.

New and multiple displacement inside Syria – with people having to move several times inside the country in search of safety – has fuelled an increase in the need for winter aid. Here, as part of an inter-agency effort, UNHCR is focusing on providing relief items including thermal blankets, winter clothing, extra plastic sheeting and reinforcing collective and private shelters currently housing thousands of displaced families.

Priority areas for distribution of these items are in Aleppo and northern parts of the country as they are the coldest. UNHCR was planning to help 1.4 million people with winter aid but only has enough funds to provide kits for 620,000 people through December.

In Lebanon, meanwhile, UNHCR and its partners estimate some 132,000 refugee households (660,000 people) are in need of some kind of assistance during the winter to keep them warm and dry. With refugees scattered across 1,700 localities throughout Lebanon, providing that assistance is a huge undertaking.

Vulnerable refugees living at cold, higher elevations are given precedence. UNHCR's US$42 million winter programme consists of a variety of activities and aid items. These include ensuring that sub-standard shelters are sealed off against the elements; and provision of high-thermal blankets, stoves, fuel vouchers and cash to purchase fuel and other items refugees need to stay warm.

This winter, UNHCR plans to provide weatherproofing kits for some 37,200 households (186,000 people) living in sub-standard dwellings and in improvised, informal settlements. Monthly fuel vouchers of US$100 will also be provided to 34,000 vulnerable families living above 1,000 metres. The programme also aims to provide blankets for up to 84,000 families (420,000 people), as well as stoves for up to 18,000 families (90,000 people) living above 900 metres.

In Jordan, meanwhile, UNHCR's US$16.5 million winter programme in Jordan for some 240,600 refugees requires another US$5.5 million, primarily to cover cash assistance in January and February next year, for about 55,000 people. The programme consists of four main components: supplemental cash for Syrians in urban areas; camp winterization; financial assistance to non-Syrians; and contingency stocks for new Iraqi arrivals.

In urban areas, cash assistance averaging US$360 per family is to be provided to 27,800 of the most vulnerable Syrian families to cover winter needs. Only half of the US$10 million required has been received. Also in urban areas, 2,200 non-Syrian vulnerable refugee families (mainly Iraqis but also Somalis and Sudanese) already receiving monthly cash assistance will get an additional $360 to cover winter needs.

Egypt's refugee population is almost entirely urbanized. The winterization effort in Egypt will focus on cash assistance, with commodities available locally. Since early November, UNHCR has started receiving calls from refugees requesting assistance to purchase warmer clothes and blankets for their children. A total of approximately 56,000 Syrian refugees (40 per cent of the registered population), are in need of such assistance.

Due to funding shortfalls, UNHCR will only be able to reach 38,000 of the most vulnerable refugees – or 60 per cent of those in need of winterization assistance. Each refugee will receive US$28 with a maximum ceiling of US$168 for families with six or more members.

In Turkey, UNHCR Turkey is providing winter support to both camp and vulnerable non-camp refugees. UNHCR will provide winter assistance to all Syrian refugees living in camps in Turkey, about 220,000 people. The assistance will include: two high-thermal blankets per person; three plastic mats per family; anoraks; and high-thermal top and bottom clothes. UNHCR will also provide winterization assistance to some 120,000 of the most vulnerable Syrian refugees living outside camps.