Until recently, students filled the halls and rooms of this dormitory in Mukachevo State University in western Ukraine’s Zakarpattya region. Now, the building throngs with activity of a different kind, as families driven from their homes by heavy shelling and fighting in other parts of the country find temporary accommodation within its walls. 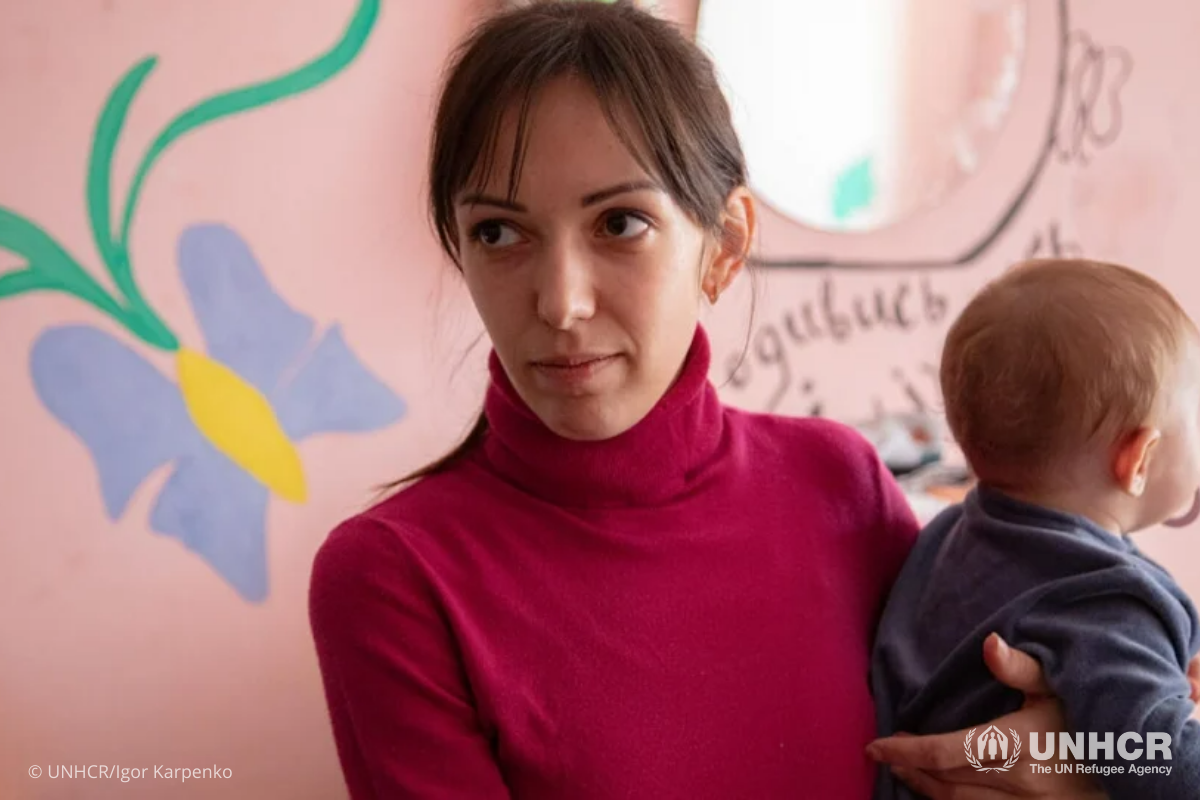 Among them is Oleksandra, 28, who arrived with her daughters Milana and Polina, and mother Natalia, at the start of the military offensive on 24 February. They fled their home in the eastern city of Kramatorsk, Donetsk, when – like many others – they woke to the sound of shelling.

“At five o’clock in the morning, we heard loud sounds of explosions, and we knew that the war had started. So, we packed and left immediately,” says Oleksandra, carrying seven-month-old Polina on her hip while Milana, 6, plays on three single beds pushed together at one end of the small dorm room where the family sleeps.

“We packed and left immediately.”

As the bombs fell, they piled into their car with a few belongings and the family’s two dogs and headed west. “My husband drove us here and went back because there is conscription to the army. All men aged 18 to 60 must serve. I worry about him very much,” says Oleksandra. “We miss him,” daughter Milana adds.

Within the space of 15 days, the military offensive in Ukraine has triggered the fastest-growing displacement crisis since World War II. It is estimated that at least 1.85 million people have been newly displaced inside the country, with many fleeing west to escape fighting in eastern, southern and northern regions. A further 2.5 million people have crossed borders into neighboring countries.

Staff from UNHCR, the UN Refugee Agency, are present in key locations in eastern, central and western Ukraine to respond to the rising humanitarian needs. Together with its partners, the agency has delivered relief items for displaced families and others affected by the conflict, including blankets, hygiene kits, jerry cans, and shelter materials to reinforce homes damaged in the fighting.

In addition to existing warehouses in Kyiv, Sloviansk and Luhansk, UNHCR has relocated humanitarian supplies to new stockpiles in Vinnytsia, Uzhhorod, Chernivtsi, and two in Lviv to enable immediate dispatch to areas in need.

To help people like Oleksandra, UNHCR is working closely with local authorities to significantly expand the temporary reception capacity for internally displaced people (IDPs), and identify buildings for rehabilitation to serve as collective centers for longer-term stays. This will be one of UNHCR’s main areas of engagement in the emergency response to the displacement crisis. Finding a secure place to live is among the top priorities for people who have been forcibly displaced or whose homes have been destroyed.

UNHCR is also scaling up programs to help provide vital services such as legal aid, psychosocial support, child protection services and measures to prevent and respond to gender-based violence. A multi-purpose cash assistance program is being set up to help displaced people meet basic needs, such as paying rent.

Mukachevo State University is one of many facilities in western Ukraine that has opened its doors to provide accommodation for displaced people. UNHCR’s local NGO partner NEEKA is supporting the center by providing warm clothes, food, water and much-needed equipment for the kitchens, including freezers and microwaves. 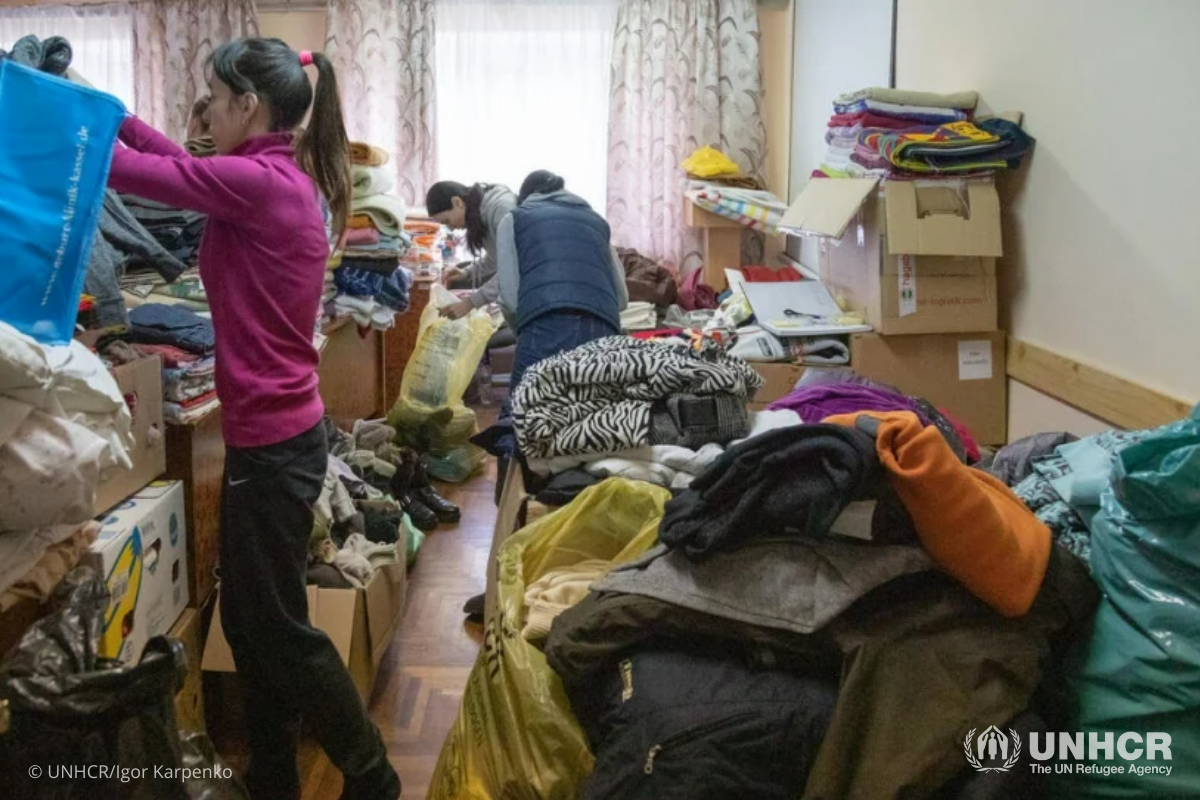 Study areas and common rooms in the dormitory are full of donations for people who have fled with few belongings. One room is filled with baby strollers, cribs and highchairs for those with infants. Another has with blankets and warm clothes, while the kitchens are stacked with fresh fruit and vegetables, tinned goods and milk.

“Zakarpattya oblast currently hosts around 100,000 displaced people. This is the largest number of people ever coming here,” explains Tetiana Shcherbak, rector of Mukachevo State University. “Many churches, schools and universities have opened their doors because there is no more capacity in local hotels or the private sector.”

“We have heating in our dormitory, so usually the local Administrative Services Centre sends mothers with children here,” Tetiana says. Up to 250 people come to the dormitory each day, with some spending only a night before continuing their journey to seek asylum in neighboring countries, while others – like Oleksandra and her family – stay longer.

“I have no idea how long we will stay here.” 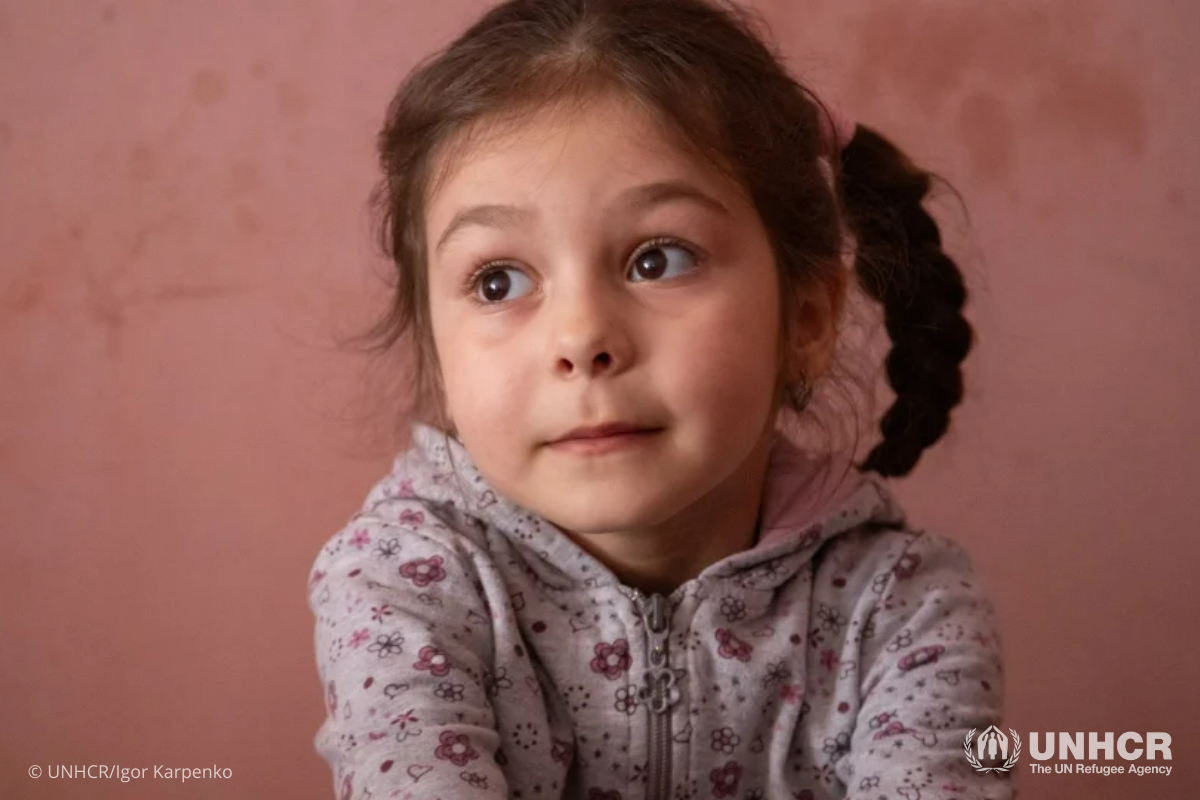 Young Milana draws a picture with a heart for her father at the desk in their dormitory room. She is hopeful that the family will soon return home and be reunited. “The war will be over soon. We will go home in four days, and I will see both my grandmas and my granddad,” she explains happily.

Oleksandra does not share her daughter’s optimism, and wonders how long they will have to call the dormitory home. “We are very grateful that the University hosts us in this room, [but] I have no idea how long we will stay here.”