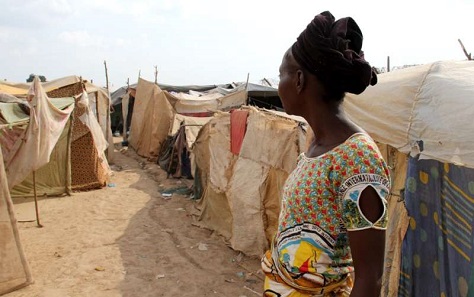 Marie-Hélène had to collect pieces of her murdered father's body to bury him but still tells people not to take justice into their own hands.© UNHCR/D.Alachi

The violence in Central African Republic has been marked since last December by its scale and ferocity as well as a new development – attacks based on religion – that has been tearing apart the social fabric of the country.

António Guterres told the UN Security Council last month that the "brutality and inhumanity" he heard about in the Central African Republic in February had caused him the most anguish of any trip in his eight years as UN High Commissioner for Refugees.

Marie-Hélène worked as a hospital nurse in Bossangoa, a town straddling the Ouham River some 300 kilometres north of Bangui. It was a place where Christians and Muslims had lived happily side-by-side for generations.

A mother of nine, she lived with her children and parents in Baton village, 10 kms from Bossangoa. Her father was a priest who was kept busy on Sundays by the large congregation attending mass.

Like others, they worried when the Seleka, a predominantly Muslim rebel coalition, captured the capital Bangui in March 2013 but they never really thought the conflict would come to them. It did. Last September Seleka forces attacked their village.

Marie-Helene and her family fled to the archbishop's residence in Bossangoa, where more than 10,000 scared Christians remain. On October 6, a Sunday, the family decided to return to Baton because their father was determined not to miss mass. While the family sat in a mango orchard, the old priest went to the church and rang the bell to summon his congregation. Instead, the Seleka turned up.

"We saw a car of Seleka getting closer and closer to the chapel. Several armed men entered and we heard the gunfire," said Marie-Hélène. She and her brothers were only able to enter the chapel after the Seleka left the next day. Marie-Hélène collected her father's body, piece by piece, before burying him in his chapel.

Marie-Hélène heard rumors in Bossangoa that she and her family were wanted, so they fled. "We went to Bossembele by bus. From Bossembele to Boali, we walked, and then we took a taxi that drove us to the capital. It took us 10 days before we arrived to the airport site where we felt safe."

Marie-Hélène is now active in the displaced community, constantly doing visits for UNHCR's partner Premiere Urgence as an outreach facilitator, referring vulnerable people such as women victims of sexual violence and abandoned children to aid organizations. She tries to ensure needy people get health care.

Alongside these activities, she tries to promote peace in her own way: "It is retaliatory violence and unfortunately people are taking law into their own hand. I always tell my brothers and members of my community to be patient, and never use violence to get justice."

More than 2,000 people have died in fighting between Seleka and anti-Balaka fighters since December. The weakness of the state and the non-existent criminal justice system in the Central Africa Republic have exacerbated the situation. Even if police arrest a criminal, there is no structure to prosecute the person. Courts and prisons are not functioning.

This prevents people from pursuing crimes such as murder via the justice system, prompting them to seek justice outside. It is tearing apart the society. Alongside establishing security, support to rebuilding the justice system will be invaluable in healing Central Africans' wounds.

"How can I reconcile when my father's cold-blooded assassination was not acknowledged. How do you want me to reconcile when in front of me I have armed men?" she said. "We want justice."

Renewed inter-communal violence late in March has triggered fresh displacement. The number of internally displaced people in CAR has risen to 637,000, including 207,000 in Bangui, and some 317,000 refugees are in neighbouring countries.

"I will never go back to Bossangoa. I cannot. I am so afraid of being in front of my father's assassins one day," said Marie-Hélène. "Too many horrors took place. We need to turn the page."

*Identity is withheld for security reasons