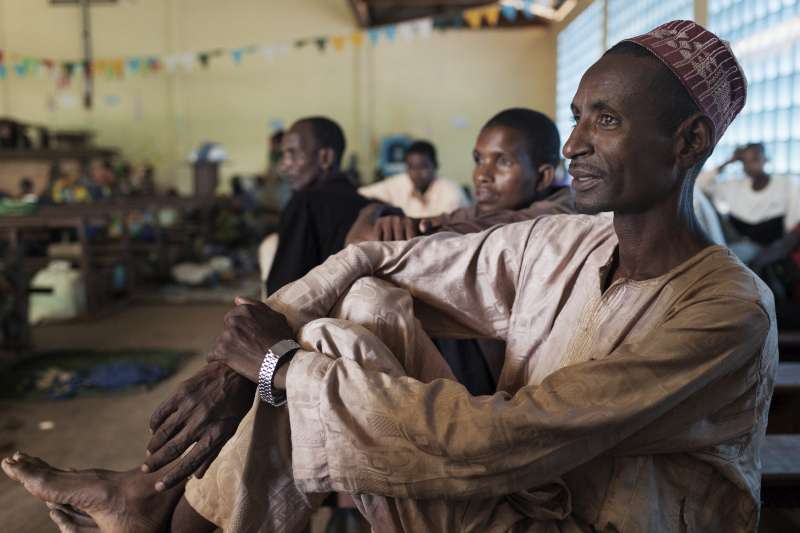 This forcibly displaced man found shelter with his friends in a church in a town north of Bangui. © UNHCR/A.Greco

The violence in the capital included stepped up attacks by the predominantly Anti-Balaka militia on Muslim populations and the African Union troops protecting them. Also last week in Bangui, a group of Muslim youth attacked Christians during a funeral ceremony, killing 20 of the mourners.

The renewed inter-communal violence has triggered further displacement within the country and across its borders. Since the attacks in the capital early last week, the number of internally displaced people in CAR has risen to 637,000, including 207,000 in Bangui. This represents an increase of nearly 16,000 people.

At the height of the crisis, close to 1 million people were displaced by violence inside the Central African Republic, including 700,000 in Bangui. More than 2,000 people have been killed in the conflict between Seleka and anti-Balaka fighters since December last year.

Anti-Balaka forces control major routes to and from Bangui as well as many towns and villages in the south-west of the country. They pose a particular threat to Muslims in the PK12 neighbourhood of Bangui, in Boda, Carnot and Berberati, to the west of Bangui, and in the town of Bossangoa, further north.

"We fear for the lives of 19,000 Muslims in those locations. UNHCR stands ready to assist with their evacuation to safer areas within or outside of the country," spokeswoman Fatoumata Lejeune-Kaba told journalists in Geneva on Tuesday.

"Representatives of the Muslim population in Boda told our staff last week that they felt trapped and that the presence and protection provided by the French troops has so far prevented them from being killed. They added that their freedom of movement is restricted and are requesting to be moved to a safer place," she added.

Many of Boda's Christians also fear the Anti-Balaka militiamen, who operate with impunity.

UNHCR and its partners are planning to send staff to the area this week to establish a humanitarian presence and ensure the delivery of assistance to those at risk in Boda and Carnot. In the meantime, the refugee agency is exploring the possibility of their relocation to Kabo and Moyen Sido in the north of the country.

The town of Bemal, also in the north, has been identified for relocation of communities at risk. A joint mission by UNHCR and the UN Office for the Coordination of Humanitarian Affairs (OCHA) is heading there today for discussions with local youth worried about their security, should the relocation take place.

Meanwhile, the mostly Muslim refugees continue to stream into neighbouring countries from Central African Republic. In the past three months, more than 82,000 Central Africans have found shelter in Cameroon, the Democratic Republic of the Congo, the Republic of Congo and Chad.