World Africa Day: Four refugees who are bringing peace and unity to their communities

For decades, from the Sahel to Ethiopia, African communities have faced conflict, disaster and violence, which have forced 30 million individuals – nearly one-third of the world's displaced population – to flee their homes.

According to UNHCR, the UN Refugee Agency,  millions of people were forcibly displaced across Africa in 2021 as conflict and violence erupted in several countries including the Democratic Republic of the Congo, Ethiopia, Central African Republic, South Sudan and Nigeria.

UNHCR remains committed to creating durable solutions for refugees and internally displaced persons across the region through access to services and livelihood opportunities, providing access to information for voluntary returns and investing in initiatives aimed at promoting peaceful coexistence between refugees and host communities.

On World Africa Day, we acknowledge the continent's forcibly displaced individuals in dire need of humanitarian assistance while celebrating and honoring the refugee leaders who are empowering one another. Please take a moment to read the stories of four extraordinary individuals who are striving to bring peace and unity to their communities. 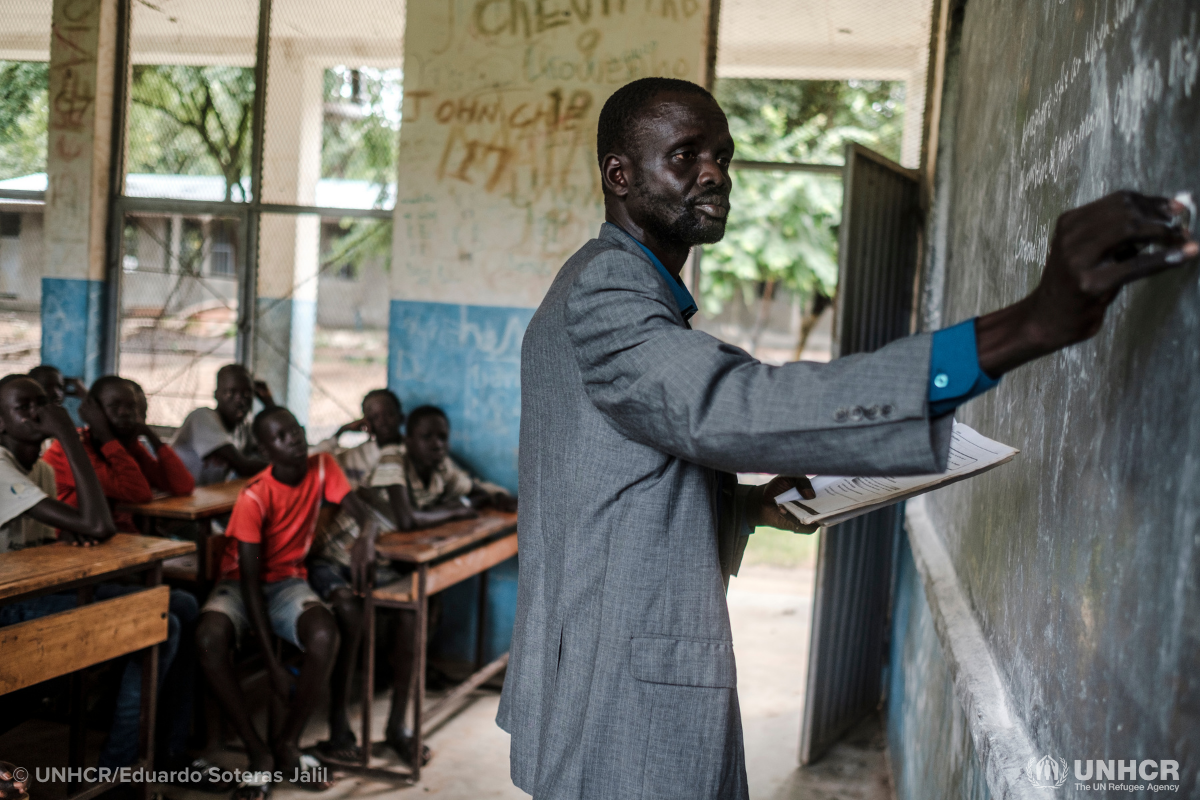 When James Tut completed his Bachelor's in Community Development and Leadership at the University of Addis Ababa in Ethiopia, he hoped to find employment with the government of South Sudan. But by the time he finished his degree in 2014, the war in South Sudan sidelined his dreams, and for the second time in his life, he became a refugee.

As the situation in South Sudan worsened, his family was also forced to flee the country, joining him in a refugee camp in the Gambella region of Ethiopia, where they were all reunited.

Unable to return home, James found strength in uplifting children in his community by serving as the vice principal at one of four primary schools in Gambella's Jewi refugee camp.

“You educate your children for them to make their lives better,” says James. “Children are the future of our country. When we return to South Sudan, they will build our country.”

The situation in South Sudan has escalated to a full-blown humanitarian emergency, triggering one of Africa's largest refugee crises. The total number of South Sudanese refugees has surpassed more than 2.3 million, many of whom are children and women facing gender-based violence and abuse.

“Fewer girls go to school here because of early marriage in the camp,” he says. “Sometimes a family’s situation also forces girls to stay at home to do business, [such as] prepare food to sell in the market or run tea stalls.”

Despite challenges in the classroom, James exudes a calm authority and continues to be a champion for refugee children — encouraging them to dream big. 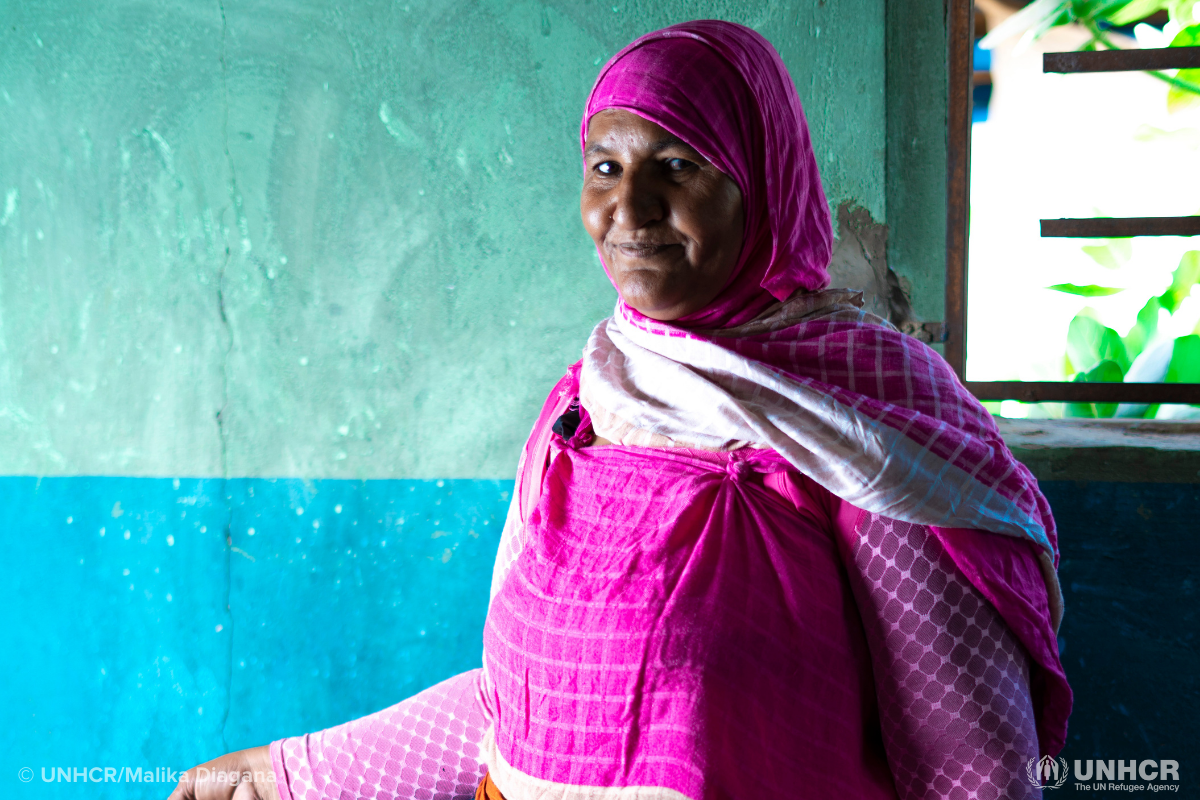 Across the Sahel Region, more than 2.8 million people have been forced to flee their homes in search of safety from violence and conflict — many of these refugees are from countries like Burkina Faso, Chad, and Mali, which have all had recent waves of displacement.

Though women and children are bearing the brunt of this crisis, refugee women in the Mebra camp in Mauritania, like Taher, are doing what they can to help their community.

Every morning during school days, Taher wakes up early and makes her way to the local primary school, where she volunteers as a cook and prepares meals for refugee children.

“I am proud of the peaceful environment in the camp, and I want to contribute to the well-being of children here at the Nursery of Tomorrow,” she says.

To Taher, women's contributions to the community can empower them to make other societal changes.

Even though she is proud of volunteering for the community, Taher hopes to get a job to support herself and her family.

Democratic Republic of the Congo: Felicitee, farmer and community leader

In 2003, hope soared after the lengthy and costly civil war in the Democratic Republic of the Congo (DRC) ended. But hope soon turned into anguish as the nation faced sporadic waves of conflict.

Due to the increased violence, five million people, like Felicitee, were forced to flee the country between 2017 and 2019.

In 2018, Felicitee fled the DRC and found refuge in neighboring South Sudan, where she has overcome remarkable odds.

When she arrived to the refugee camp in Makpandu, Felicitee started farming and was able to sell the vegetables she grew, which enabled her to earn a living and provide for her family.

Although she initially used her earnings to help sustain her family, she knew there was more she could do. Using the leftover profits from farming, Felicitee opened a baking and tailoring business and was able to financially empower other women in her community.

"This gives me much courage to work more," she said, referring to all she has been able to achieve through farming.

With support from UNHCR and other humanitarian partners, refugee women like Felicitee are becoming food secure and are being empowered to make positive contributions to their host communities. 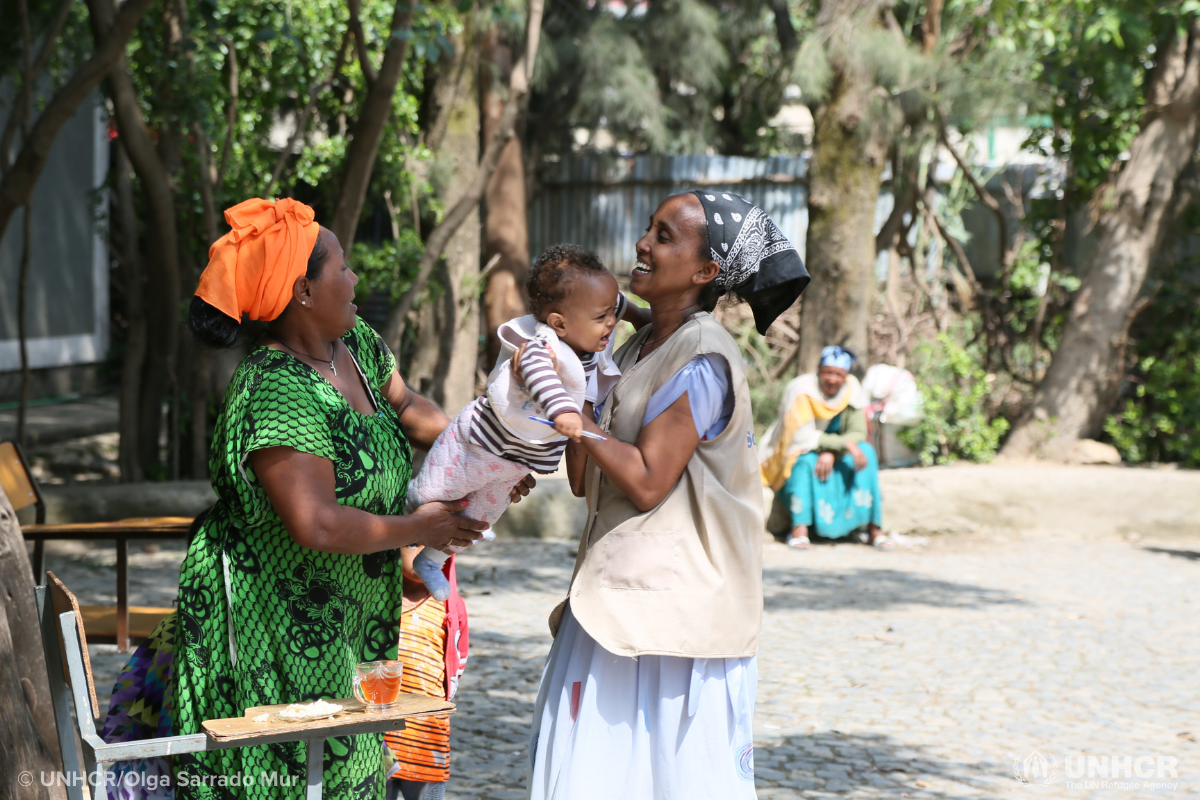 Despite hosting an estimated 823,000 refugees and asylum seekers from neighboring South Sudan, Eritrea and Somalia, Ethiopia faces a growing humanitarian crisis. Armed conflict in the country's northern region has forced nearly 60,000 Ethiopians to flee to Sudan and has internally displaced more than 2.1 million individuals like Mabret.

Marbet and her family were forced to flee their home in Tigray as violence approached her neighborhood. Though she was forced to make the difficult decision to flee, she made it a priority to help her fellow countrymen and women displaced by the conflict.

"I have to help any people if I can," Mabret explains. "As a social worker, my work is to protect people."

UNHCR has established 57 protection desks across the region, where nearly a hundred social workers like Mabret are providing counseling and helping many cope with the trauma of conflict and displacement.

How to help refugee families…

As USA For UNHCR’s newest monthly donor, you can help vulnerable women, children and families receive the lifesaving aid and protection they need. Your donations will protect and empower people like Christine, who was forced to flee conflict in South Sudan.

With generous donations from our donor community, Christine received cash assistance from UNHCR, allowing her to open a little coffee shop and enabling her to rebuild her life and support her family. Please join our compassionate community and make a gift today.