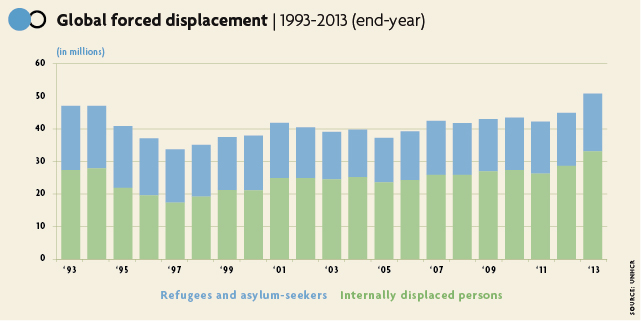 UNHCR's annual Global Trends report, which is based on data compiled by governments and non-governmental partner organizations, and from the organization's own records, shows 51.2 million people were forcibly displaced at the end of 2013, fully 6 million more than the 45.2 million reported in 2012.

This massive increase was driven mainly by the war in Syria, which at the end of last year had forced 2.5 million people into becoming refugees and made 6.5 million internally displaced. Major new displacement was also seen in Africa – notably in Central African Republic and South Sudan.

"We are seeing here the immense costs of not ending wars, of failing to resolve or prevent conflict," said UN High Commissioner for Refugees António Guterres. "Peace is today dangerously in deficit. Humanitarians can help as a palliative, but political solutions are vitally needed. Without this, the alarming levels of conflict and the mass suffering that is reflected in these figures will continue."

The worldwide total of 51.2 million forcibly displaced represents a huge number of people in need of help, with implications both for foreign aid budgets in the world's donor nations and the absorption and hosting capacities of countries on the front lines of refugee crises.

"The international community has to overcome its differences and find solutions to the conflicts of today in South Sudan, Syria, Central African Republic and elsewhere. Non-traditional donors need to step up alongside traditional donors. As many people are forcibly displaced today as the entire populations of medium-to-Iarge countries such as Colombia or Spain, South Africa or South Korea," said Guterres.

Displacement data in the annual report covers refugees, asylum-seekers and the internally displaced. Among these, refugee numbers amounted to 16.7 million people worldwide, 11.7 million of whom are under UNHCR's care and the remainder registered with the UN Relief and Works Agency for Palestine. These totals alone are the highest UNHCR has seen since 2001. In addition, more than half of the refugees under UNHCR's care (6.3 million) had at end 2013 been in exile for more than five years.

Overall, the biggest refugee populations under UNHCR care and by source country are Afghans, Syrians and Somalis – together accounting for more than half of the global refugee total. Pakistan, Iran and Lebanon, meanwhile, hosted more refugees than other countries. 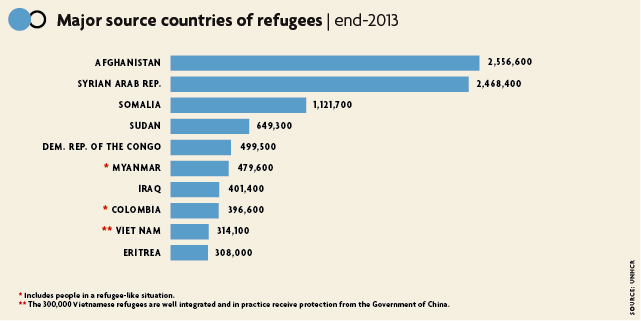 In addition to refugees, 2013 saw 1.1 million people submitting applications for asylum, the majority of these in developed countries (Germany became the largest single recipient of new asylum claims). A record 25,300 asylum applications were from children who were separated from or unaccompanied by parents. Syrians lodged 64,300 claims, more than any other nationality, followed by asylum seekers from Democratic Republic of the Congo (60,400) and Myanmar (57,400).

Internal displacement – people forced to flee to other parts of their country – amounted to a record 33.3 million people, accounting for the largest increase of any group in the Global Trends report. For UNHCR and other humanitarian actors, helping these people represents a special challenge as many are in conflict zones.

Part of UNHCR's work is finding long-term solutions for people who become forcibly displaced. Where possible this is through voluntary return, but other possibilities include local integration or resettlement in third countries. The year 2013 saw the fourth lowest level of refugee returns in almost a quarter century –414,600 people. Some 98,400 refugees were resettled in 21 countries. Full worldwide data on local integration and returns of internally displaced people (IDP) was not available although 1.4 million of them returned home in countries where UNHCR is operational with IDPs.

The worldwide population of stateless people is not included in the figure of 51.2 million forcibly displaced people (since being stateless doesn't necessarily correlate to being displaced). Statelessness remains hard to quantify with precision, but for 2013, UNHCR's offices worldwide reported a figure of almost 3.5 million stateless people. This is about a third of the number of people estimated to be stateless globally.